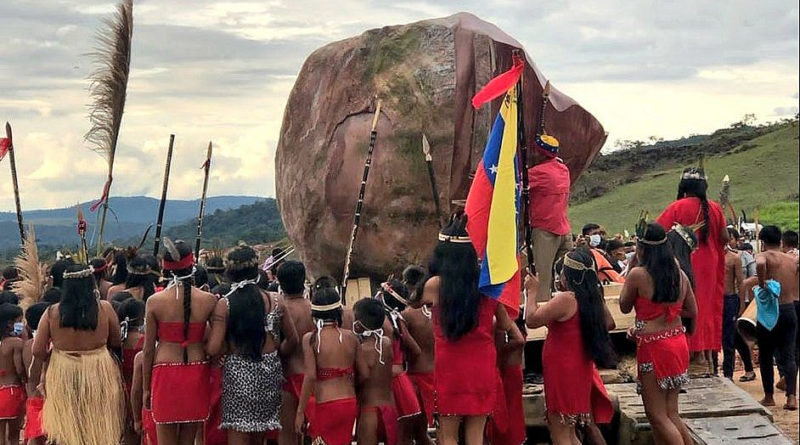 With a historic ritual, this Tuesday, April 21, the Pemón people formally welcomed the Kueka Stone to the community of Santa Cruz de Mapaurí, in the Bolívar state, after more than 21 years of tireless struggle for their return.

Minister Villegas said that the return of the Kueka Stone marks a historical milestone in the fight against the illicit traffic of cultural goods in the world and gives a remarkable attestation of the perseverance and strength of our native peoples. “The world has its eyes fixed with admiration on the struggle of Santa Cruz de Mapaurí, of the Pemón people. The fight is long, comrades, but you are at the forefront of the global fight for the rescue, return and repatriation of cultural heritage that was looted, robbed from the peoples of the world,” he said.

He stressed that our native communities made reality what at some point in history seemed impossible, since previously indigenous peoples were despised, stripped of their sacred values and considered as something “folkloric” and disreputable.

He recalled that it was thanks to the arrival of the Bolivarian Revolution that indigenous communities were vindicated and the Venezuelan state, with Commander Hugo Chávez at the helm, assumed the cause of the Pemón people as its own.

“Without the Bolivarian Revolution, without Chávez, who knows how much longer the Pemón people would have had to wait to see their sacred grandmother return. (…) Those who believed they were taking a decorative stone did not imagine that this one, who was only the grandmother of the Pemones, would end up as the grandmother of all of Venezuela. The Pemon cause, the Kueka cause, became the cause of Venezuela, the Venezuelan state endorsed the aspiration for justice of the Pemón indigenous people, and that is not common,” he stressed.

Venezuela National Monument
The minister reported that, as part of the celebration of the return of the Abuela Kueka, the president of the republic, Nicolás Maduro, signed the decree that declares the Quebrada de Jaspe – a sacred site where this stone is located – as a National Monument of Venezuela, for its important ancient and millennial significance.

Likewise, he presented the Francisco de Miranda Order and the Aquiles Nazoa Award to the men and women of the Santa Cruz de Mapaurí community who, through their unwavering struggle, contributed to the voice of the Pemón people being heard in the world. “They taught us the conviction that love can do more than any pandemic, than any blockade, than imperialism, because you summarize the victorious warrior spirit of our native peoples,” he added.

For her part, the Minister of Popular Power for Indigenous Peoples, Aloha Núñez, highlighted the significance that this has not only for the Pemón people, but for the peoples of the world. “This is going to be a benchmark of struggle for the battles of many and many brothers who are fighting to be recognized and to be given back what was stolen from them since the times of colonization.” She highlighted the work of the Venezuelan Foreign Ministry, on instructions from President Nicolás Maduro and Commander Hugo Chávez, to achieve the return of the stone.

“Thanks to the prayers of our grandmothers and grandfathers, who never faltered and were always in this fight constantly!” Said Núñez. “They never lost hope. They were always battling with the support of all the Venezuelan people.” She praised the Pemón people for their perseverance and asked them to continue praying to Grandmother Kueka, so to give the greatest stability and balance to our Homeland and our leaders. “We have to ask Abuela Kueka always, all the time, to protect us, guide us and give us great health to continue fighting and continue achieving these triumphs.”

Likewise, Minister Osvaldo Barbera assured that despite the difficulties facing Venezuela, as a consequence of the economic blockade and the COVID-19 pandemic, the national government has fully complied with its commitment to our native communities. “Abuela Kueka becomes the grandmother of the Venezuelan people and in this difficult time, those prayers and beliefs of yours become a defense. We are full of energy to continue working and winning, because the fight belongs to everyone,” he added.

The Kueka Stone is an ancient rock considered by the Pemons to be the guarantor of the balance and harmony of nature.

Declared Natural Heritage of Humanity by the United Nations Educational, Scientific and Cultural Organization (Unesco) in 1994, it was illegally stolen by the German artist and merchant Wolfgang Kraker von Schwarzenfeld in 1998, under the government of Rafael Caldera, who took her to Germany to join the Global Stone exhibition in the Tiergarten park gardens, in Berlin.

Since then, the Pemón people began a tireless fight for the recovery of their grandmother, a demand that was met after the arrival of the Bolivarian government, which began various legal procedures to demand the repatriation of the stone.

After a series of talks, both countries reached a friendly agreement and in May 2018 the repatriation of the rock formally began with a healing ritual by a delegation of 12 shamans from the Pemón people who traveled to the German capital.

Finally, on January 20, the stone was removed from the Tiergarten Metropolitan Park in Berlin, from where it began its transfer to the South American nation, where it arrived on Thursday, April 16.