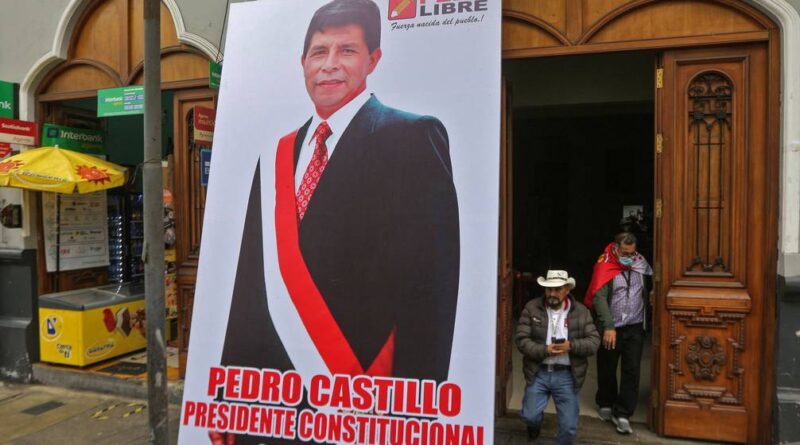 Pedro Castillo, the left-wing candidate for the Presidency of Perú, still awaiting resolution of the irregular delayed confirmation of his victory by the country’s electoral tribunals, asked this Tuesday for “respect” for the popular vote in an election that has already taken place. Castillo referred to his victory as “irreversible,” reported news agency EFE.

Castillo made the statements during a press conference with his technical team before the Foreign Press Association in Peru (APEP), held in Lima.

For a few minutes, the candidate spoke about the tense political situation in the country following the decision by his right-wing rival Keiko Fujimori who, faced with her imminent defeat, filed annulment requests although the regular legal deadline had elapsed.

“We always defend the democratic framework,” said Castillo. “We are waiting for the confirmation of the electoral authorities. What has been done on our part was not only a defense (of the vote) in all scenarios, but also to tell the country that on our behalf there is no aggression, neither administrative, nor moral, or political, and still less electoral.”

Castillo expressly referred to Fujimori’s attempt to annul the votes of 200,000 of his rural supporters by claiming, without evidence, that a “systematic fraud” took place. The president elect expressed his greeting to those who are with him in the defense of the “forgotten vote at the top of the hill, of that population and those voices that have never had a voice,” referring to the Peruvians living in the mountains who are despised by the political and economical elite of Lima.

“From our side, we reiterate that no one will meet with aggression, but we are not going to allow an oppressed people to continue to be discriminated against for years more years,” said Castillo emphatically.

Irreversible victory
Prior to his statements, Castillo’s running mate for vice president, Dina Boularte, and several members of his technical team and legal advisers had denounced the latest actions of Fujimori to “block” the pronouncement of Castillo’s victory by the National Electoral Jury (JNE).

“Keiko Fujimori, with tricks, is trying to block the appropriate and transparent functions of the JNE,” said Boularte. “International organizations have already affirmed that the ‘fraud’ that she is reporting aims to invalidate this electoral process, and does not exist. They want to cause anxiety in the country and ignore the entire electoral process, a situation that is unconstitutional.”

According to internal calculations, even despite the more than 800 claims to annul various votes registered by Fujimori—the vast majority of which cannot legally proceed because they were issued after the legal deadline—”Professor Castillo’s triumph is irreversible,” commented Boularte.

Although the JNE has yet to process all of the “second instances” of observations to annul votes for alleged fraud, at the moment no requests have been validated in the first instance by the various regional electoral juries due either to formal errors or lack of reliable evidence.

These statements by Castillo’s team coincide with EFE’s analysis of the voting minutes on the JNE website.

Looking for a coup
In this sense, Castillo’s legal advisers, led by Aníbal Torres, reflected that with her avalanche of legal resources, what Fujimori seeks is to prevent a proclamation by the president while they plan “a coup d’état or attempt to annul the elections, without having any cause nor any legal foundation.”

With the term “coup,” the advisers referred in particular to a type of “soft coup” such as the one proposed last night by the ultraconservative congressman-elect Jorge Montoya, who aimed to annul the entire electoral process due to “mistrust” of the electoral system, just because the results did not favor the Peruvian elite.

Montoya, a retired admiral from the Navy, indicated that this could happen if July 28 is reached without the JNE having proclaimed a winner, further arguing that Castillo’s “legitimacy” if he wins will be “null.”

The Peruvian Constitution does not authorize the annulment of elections under any circumstances, except “when the null or blank votes, added together or separately, exceed two-thirds of the number of valid votes,” as stated in Article 184 of the Peruvian Magna Carta.

For its part, no international observation mission, including that of the Organization of American States (OAS), has found any indication of fraud in the process. Only Fujimori and her followers on the Peruvian right have raised this possibility, but there is no evidence to support the claim, so the delay in Castillo’s proclamation has generated uncertainty and unrest.

Featured image: Banner of Pedro Castillo wearing the presidential sash. The Peruvian elite has maneuvered to delay his formal confirmation, with operations that many are calling a coup d’état in the making. Photo courtesy of AFP.