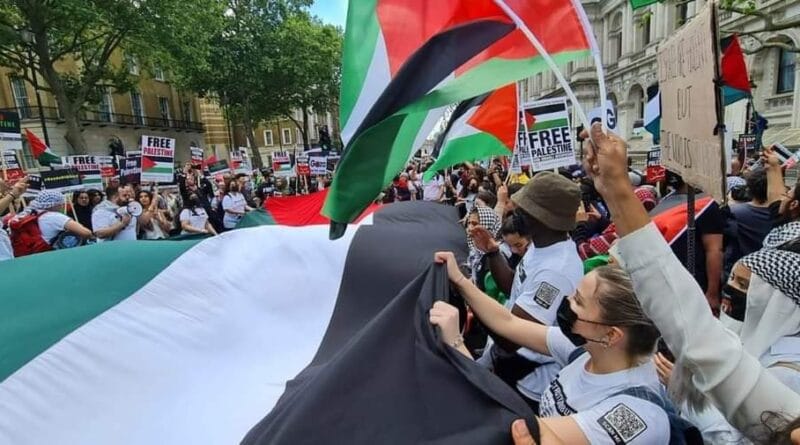 London (QNN)- Thousands of protesters gathered in London on Saturday as Jeremy Corbyn called for the G7 to support the Palestinian people.

The protest, organized by The Resist the G7 coalition as part of the “Resist G7: Day of Action for International Justice” rally, marched to Prime Minister Borris Johnson’s official residence in Downing Street to stand in solidarity with the people of Palestine. Protesters held placards and chanted “free, free Palestine”.

The protesters demanded an end to complicity in Israel’s war crimes against the Palestinians by the United Kingdom and other G7 governments.

At today’s Justice For Palestine demonstration in London, I also called for a halt to arms sales. UK-made weapons are killing civilians – including children – in conflicts abroad. This must stop. pic.twitter.com/Sf2tEGjtkX

“At today’s Justice For Palestine demonstration in London, I also called for a halt to arms sales,” Corbyn wrote on Twitter.

“We are here to support the Palestinian people whether we are Jewish, Hindu, Muslim, Christian or no faith – our unity is a human unity.”

RELATED CONTENT: The Past is the Present in Palestine

“UK-made weapons are killing civilians – including children – in conflicts abroad. This must stop,” he said.

During his speech, Corbyn said that the demands of pro-Palestine supporters are “clear”: “(To) end the occupation of the West Bank, the withdrawal of all the settlements and an end to the siege of Gaza.”

He added that he was “proud” to include recognizing Palestine as a state in the 2019 Labour manifesto, concluding that “we must stand together for the freedom for the people of Palestine”.

The massive march comes as part of a series of pro-Palestine protests in London, which have been organized since the start of the Israeli aggression on the besieged Gaza strip and the Israeli violations against Al Aqsa mosque and the Sheikh Jarrah neighborhood in occupied Jerusalem last month.

Despite the ceasefire between the resistance and the occupation state, the latest continued its violations against Palestinians. Today, Israeli police shot dead a mother who is also a former detainee, claiming that she was carrying a knife. Yesterday, a 15-year-old boy was killed in Nablus while he was peacefully protesting an illegal settlement outpost, which has been being built on lands stolen from his village.