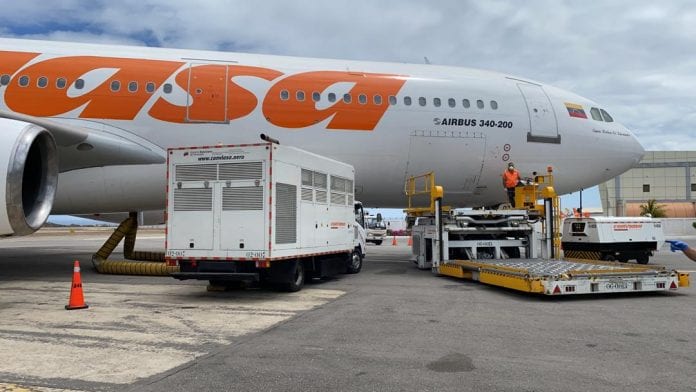 Last Monday March 6th, Venezuelan Chancellor Jorge Arreaza announced a humanitarian flight from Conviasa for Thursday (today) on the route Caracas – Toluca (Mexico) – Caracas to bring Venezuelans stranded in the US but not properly served due to the inhuman US sanctions that were not lifted even in these terrible circumstances.

Arreaza announced that Venezuelan government offered free transportation for US citizens stranded in Venezuela on this flight, regardless of Washington’s criminal attitude.

One day later the US Embassy in Bogota helped with Maduro’s government humanitarian initiative, sent emails and posted a notice on its website:

We understand that there are a few seats left on the Conviasa flight from Caracas to Toluca, Mexico on Thursday, April 9, 2020.

THIS FLIGHT CAN BE BOOKED THROUGH TRAVEL AGENTS.

Please contact a travel agent or the airline directly for seat availability, reservations, and pricing information.

If you purchase a ticket on this flight, and encounter difficulties traveling to the airport from your location, please contact us at ColombiaEvac@state.gov or (57) 1 275-2000. If you believe you will have difficulty reaching the airport due to travel restrictions, please provide us with your travel information (name, date of birth, passport number, and contact details).

Disregarding inaccurate information in the US Embassy notice, like the suggestion to book the flight using travel agents or with an alleged purchase option, when it was made public by Venezuelan authorities that is was a free of charge, humanitarian service, and that those interested should contact Venezuelan ministry of foreign affairs, the US diplomatic mission for the first time in months “cooperated” with legitimate Venezuelan authorities and took advantage of a real humanitarian gesture that is the opposite of US criminal behavior towards Venezuelans.

Today, Thursday March 9th, as promised, Conviasa accomplished the mission and informed on its twitter account that 154 foreigners took advantage of this humanitarian gesture. Social network sources refer to only 27 US citizen actually being among the 154 passengers.

Social media in Venezuela mocked the numbers, saying that US citizens decided to stay in Maduro’s “dictatorship” instead of going back to the sad catastrophic scenario that the US is facing, due Covid-19 and the lack of leadership and erratic decision making of president Trump.

Conviasa flight from Caracas to Toluca, Mexico as an evacuation flight for US citizens from Venezuela #Venezuela pic.twitter.com/ylHHOv8RGt

An isolated chamber inside the Conviasa airbus 320 was set up to transport potentially infected patients.