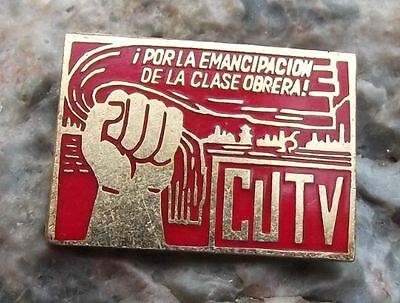 The National Front for the Struggle of the Working Class (FNLCT) and the “Central Unitaria de Trabajadores de Venezuela” (CUTV), affiliated with the World Federation of Trade Unions (WFTU), alert the working class and the peoples of the world, international class-based trade unionism and all the revolutionary, anti-imperialist, popular, democratic and progressive forces of all countries, on the dangerous escalation of aggression that the US government implements against Venezuela and people of the Bolivarian Republic of Venezuela, this time with the certain threat of an imperialist military attack.

For some days, the Pentagon began a strong deployment of military contingents approaching the coasts of Venezuela and, simultaneously, there is a deployment of US military personnel in Colombia, in areas near the border with our country, all disguised as anti-drug trafficking actions in the Caribbean, after the United States Department of Justice, through the prosecutor of that country, announced false charges of terrorism and drug trafficking against the President of the Republic, Nicolás Maduro and other leading figures in the Venezuelan state.

The infamous accusation of “drug trafficker” against the Venezuelan government falls under its own weight in the eyes of the world, because the main producers and marketers of narcotics on the continent are in Colombia and Mexico, while the main consumers are the United States of America. The political objectives of domination in the Caribbean and South America, pursued by US imperialism with the alleged fight against drug trafficking, show the mafia relationship between the DEA and the Colombian drug cartels.

Faced with this new criminal act of Yankee imperialism against the people of Venezuela and their right to self-determination, we urgently call on the entire working class and the class and progressive trade union movement in the world, led by the WFTU, as well as the rest of the social and political forces that fight for a world of justice and equality, against the imperialist wars of prey and for respect for the sovereignty of nations, to make a strong and immediate statement against the development of an imminent military attack by the States United against the Bolivarian homeland, which would be perpetrated to impose a government submissive to the dictates of American power, at the service of its monopolistic corporations.

The threat of war aggression against the Venezuelan nation, in the context of the deep world capitalist crisis accentuated and accelerated by the coronavirus pandemic, expresses the exacerbation of inter-capitalist and inter-imperialist contradictions, which put humanity at risk of greater conflicts and imperialists wars. Capitalism, in its imperialist phase, has been shown to be a threat to health, life and peace on the planet. Under such conditions, the need for a proletarian and popular offensive against the domination of capital in the world increases, to oppose the inhuman agenda of capitalist profit, the solidarity, libertarian and justice agenda of the peoples.

Comrades, brothers and sisters of the working class in all countries, we urge you to express rejection of the imminent US military aggression against Venezuela and the intensification of the imperialist blockade, while demanding the return to our country of resources and financial assets. illegally seized by the United States and its lackeys in Europe.

General Coordination of the FNLCT

Executive Committee of the CUTV