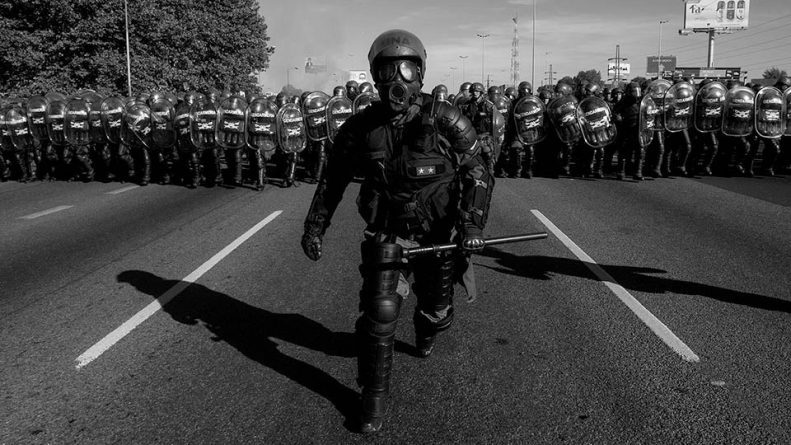 The ideal in the case of Venezuela is that the major media and international agencies have a guaranteed focus for their work, which is proportional to having images of “protesting civilians” being “attacked” by State forces.

The headlines of the international press seem to be designed to publish exclusively negative news about the “repression” in Venezuela. The “informative” guideline is, in short, to get images and videos that show a lot of violence but that have as victims some “poor hungry young people who fight for the freedom of their country” and who are by no means violent criminals sponsored and paid by the extreme right to generate social and media chaos (or openly join a Coup D’Etat).

That is, under no circumstances someone who lives outside Altamira neighborhood, a small sector of the Greater Caracas that does not cover more than 5 square kilometers, can learn about that detail, because the essential thing is always to see that the induced events happening there and for nothing in the world arise from the spontaneity of an anguished population and fed up by the serious economic crisis that the South American country suffers.

So, the ideal in the case of Venezuela is that the mass media and international agencies have a guaranteed focus for their work, which is proportional to having images of “protesting civilians”, videos of “repression of the security forces of the dictatorship”and “informative” pieces highlighting how very, very bad the “repressive regime of Nicolás Maduro” is, its great evil and arrogance for not letting political power fall into the hands of the false “interim president” Juan Guaidó, and how the “usurpation of power” is already in its “final phase”.

This is how the actions of the large corporate information networks are summarized. As the violence in the “Altamira protest center” is radicalized, the presence of foreign correspondents, videographers, graphic reporters, journalists and documentalists grows exponentially, to the point that their participation in the conflict leads them to be targets of violence and with it also to become “victims” of the repressive and brutal history that is executed in Venezuela.

However, the vast majority of these stories are told with a large bias. Although it is shown that Venezuelan security and riot forces act in accordance with the Venezuelan laws in the progressive and proportional use of force, at no time do they tell how civil groups that “protest” execute vandalism against the public and private patrimony, such as burning public transport units, trucks that distribute food to the population and trying to invade a military headquarters located less than 500 meters from the places where violent events are recorded: the Generalissimo Francisco de Miranda Air Base, popularly known as “La Carlota”.

And it is that, while the same media account that in Venezuela “the repression is brutal”, in other countries like France, for example, they try to silence the voices of the thousands of demonstrators (yellow vests) that in Paris and other cities of the European Union has been protesting for seven months – October 2018 – for respect of labor demands obtained in decades of struggle, against the rise of gasoline prices, against the conservative policies and the neoliberal economic packages carried out by the right-wing government of President Emmanuel Macron.

In Macron’s France the repression is not such and the protesters are violent
The covers of Spanish newspapers, neighbors of France, give preference to images about Venezuela – the bastion that liberated much of the American continent from the yoke and the colony of the Spanish Kingdom – about the big demonstrations and the armed repression carried out by the French police forces before, during and after any protest.

This May Day, for example, in the riots in Paris against the Macron government, at least 88 people were arrested before the violent demonstrations, for carrying “all kinds of incendiary devices, objects that could be used as weapons or other instruments or garments to hide their own identity. But the preventive measures failed to avoid the incidents, “explain the EFE and AFP agencies, something that if it happened in Venezuela, Nicaragua, Bolivia or Cuba, it would surely be reported as a violation of the right to protest, but when it comes to France the police work is exalted.

And it is that in Caracas and in Managua, capital cities of countries with governments distant from the interests of Washington, the scenes of repression committed by the security forces are part of the best products obtained by means, violence and vandalism that executed groups of civilians https://www.google.com/amp/s/www.cbsnews.com/amp/news/venezuelan-military-helicopter-crashes-killing-7/?fbclid=IwAR3U3Ec130oi1Fp76yDoQdTUTzx9_x1dfX4Lj-Q6VfIon4ABhCro-JXd1uk hooded in the streets are omitted and always the victims are those who turn their backs to the camera to leave on the main plane to the repressors.

To see more clearly what really happens in the specific case of Caracas, which is again in the highest trend of the media, it would be enough to make a turn to the cameras and observe from the view of the alleged repressors what is the violence that is generated from the focus of “the civilian victims” . It would also be ideal to make routes that can transmit simultaneously as a few blocks above or to the east and west of Altamira, life and daily life pass as if nothing happened a few kilometers.

In fact, if a more objective journalistic work were done, while covering the focus of violence in Altamira, it could also be transmitted and narrated the daily life in the areas where the tranquility of the population is not affected, as well as the demonstrations to favor of the Government of Nicolás Maduro and the rejection of the violent actions carried out by the extreme right.

And it is that if you are talking about repression, none of the governments that currently repudiate the supposed violence used by the Venezuelan government through its armed force against “the people”, have to argue that within their countries the protesters who go out to the streets to demand reinvindications and respect for their social, labor and human rights, they are not violated, deprived of freedom, tortured and brutally repressed.

Argentina, Chile, Paraguay, Brazil, Peru, Colombia, Ecuador, the United States, France, Spain, all countries that condemn the repression in Venezuela, are states that have extremely repressive and brutal police forces. In Colombia, not only the protester is exterminated, but disappears , for example.

The carabineros in Chile are also part of this batch of repressive forces that often commit crimes against humanity, violate the integrity of citizens and act disproportionately whenever they can.

The same happens in Argentina, where recently dozens of people were arrested for demonstrating against the attempted coup in Venezuela supported by the government of Mauricio Macri.

In Spain people are imprisoned for sending messages against the Government through social networks. In Lenin Moreno’s Ecuador, media outlets that explain the corruption of his government and the arbitrariness of his regime are closed .

But all that is silenced by the big media chains, which only change their editorial line or better said, they have a style manual designed exclusively for Venezuela and similar cases.