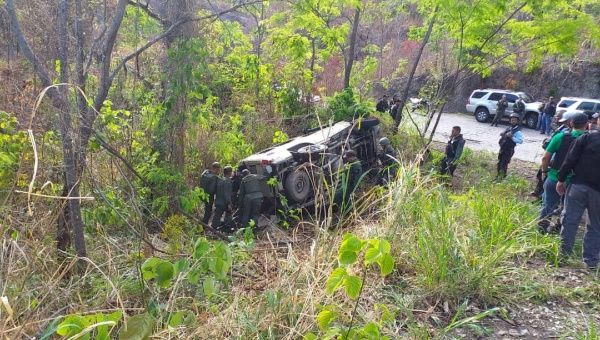 The ambush occurred in the state of Aragua, Venezuela with a group of unknown individuals.

An ambush against a mixed military commission in the early hours of Saturday left three troops dead on the Magdaleno Highway in the city of Palo Negro in the state of Aragua, Venezuela.

The Venezuelan Minister of Defense condemned these as coup actions.

According to preliminary information from Venezuelan security forces, the attack took place in the “La Guacamaya” sector when the commission was traveling along the highway after supporting another military group that guarded the Hacienda Arenales facilities, an industrial complex belonging to the state agricultural company of the Bolivarian National Armed Forces (Agrofanb).

After an exchange of shots fired with an unrecognized group of heavily armed individuals, the brigadier general of the Bolivarian Military Aviation (AMB), Jackson Silva Zapata, and two officers of the Aragua Police identified as Bruno Manuel Benavidez, 34, were killed and Jesús Eduardo Arraiz Sánchez, 30, both with the rank of chief officer.