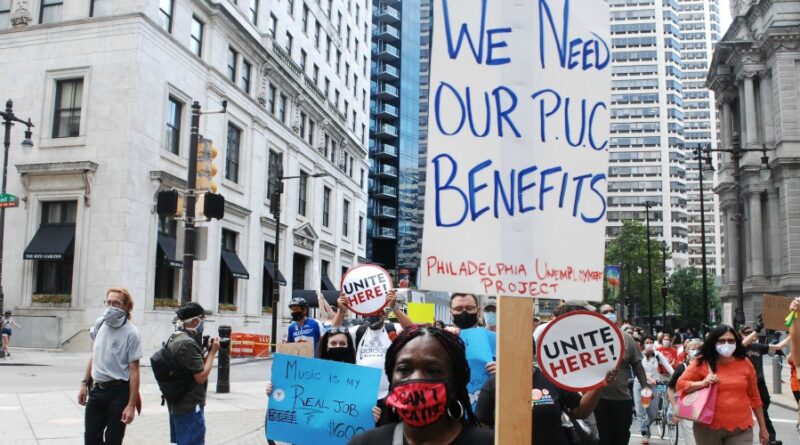 While Senate Republicans push for a “skinny” coronavirus relief bill, half of jobless Americans couldn’t pay for basic expenses in August, up from 27% in July.

After Senate Republicans allowed a $600-per-week boost to federal unemployment benefits to expire at the end of July, the share of jobless Americans struggling to afford basic necessities in the midst of the coronavirus pandemic and resulting economic crisis nearly doubled, according to polling released Tuesday by Morning Consult.

The survey found that “the share of unemployed workers unable to cover their basic expenses with their unemployment benefits rose to 50% in August, or an estimated 8.3 million Americans.” Comparatively, 27% of unemployment insurance (UI) recipients couldn’t cover the basics in July, while the weekly boost was still in effect.

As the intertwined public health and economic disasters forced millions out of work this spring, Congress passed and President Donald Trump signed a Covid-19 relief package that added the $600 boost. However, Republican lawmakers and the president have resisted attempts by Democrats to continue the expansion—clinging to their debunked claim that the temporary relief was deterring people from returning to work.

More than five months later, millions remain out of work and economists warn that there are millions more people unemployed than there are job openings, so the employment crisis is expected to persist. Although Trump took executive action in August to use disaster relief money to increase UI benefits by $300 per week—with states contributing another $100—funds are limited and the rollout has been slow.

RELATED CONTENT: The Growing Disparity in Living Conditions-and how it Could Lead to a Civil war

“The president’s executive memorandum is a nothing burger and a false promise that actually does more harm than good because it diverts attention from the desperate need for the real relief that can only come through legislation,” Heidi Shierholz, senior economist and director of policy at the Economic Policy Institute, said last month.

Trump put out that widely criticized memo and three others after months of fruitless debates and the GOP-controlled Senate refusing to vote on the House-approved Health and Economic Recovery Omnibus Emergency Solutions Act (HEROES) Act, despite millions of Americans struggling to afford housing, utilities, food, healthcare, and other essentials during the pandemic.

Due to the #pandemic and #EconomicRecession, families will face power shutoffs and evictions. #Congress must pass a relief package to ensure #NoShutoffs and #NoEvictions for #Americans nationwide. https://t.co/dUDcOAMlKe

Meanwhile, as Common Dreams reported earlier Tuesday, new polling from Gallup and West Health revealed that 50% of Americans are concerned a major health event could lead to bankruptcy, a five-point increase from a survey last year.

“Not only is it unconscionable that the Trump administration cut the incomes of 30 million unemployed workers during a pandemic and eliminated key lifelines and support for families across the country,” Linden said, “but over the past month we’ve seen the impact of his inaction ripple through the already-fragile economy and make this crisis so much worse than it needed to be.”

“One month into this fiasco Congress and the Trump administration face a clear choice: Restore the incomes of 30 million workers and protect them, their families, and the economy, or accept the blame for an economic recession that is threatening to spiral into a completely avoidable full-blown depression,” he added.

But millions of households will struggle to pay as extended unemployment benefits expired 5 weeks ago & one-time $1200 stimulus checks were issued 5 months ago.

Rather than heeding calls for bold and sweeping action, Senate Republicans will push a “skinny” relief bill when they return from recess next week, Newsweek reported Tuesday.

“We have a focused, targeted solution that we’d hope that the House would pass,” Sen. John Barrasso (R-Wyo.) told reporters. “It’s focused on getting people back to work, getting kids back to school, and the specifics of the disease.”

Barrasso, chair of the Senate Republican Conference, added that the GOP proposal “leaves out so many things” that House Speaker Nancy Pelosi (D-Calif.) “has put in her bill that are unrelated to coronavirus.”

Pelosi, who ordered her chamber back from recess early to vote on emergency U.S. Postal Service legislation, tried to resume negotiations in a brief phone call with White House Chief of Staff Mark Meadows last week.

The House speaker said that conversation with Meadows “made clear that the White House continues to disregard the needs of the American people as the coronavirus crisis devastates lives and livelihoods.”

Pelsoi and others critics, including progressives in the upper chamber, have also laid blame on Senate Majority Leader Mitch McConnell (R-Ky.), who was targeted Tuesday by protesters holding nationwide #ReliefIsDue rent protests.

Today is Sept. 1st — rent & mortgages are due, bills are due, homelessness is skyrocketing, small businesses are going bankrupt and Sen. Mitch McConnell & Republicans are doing nothing. #reliefisdue https://t.co/7XuwronKq8

The unemployed suffer while paying rent & buying groceries is becoming increasingly difficult. Food banks are seeing a surge in demand as COVID-19 permeates all aspects of our lives. And Sen. McConnell & Republicans continue to sit at home and do nothing. #reliefisdue pic.twitter.com/Zez0gqgLHt

Sen. Elizabeth Warren (D-Mass.) is sponsoring legislation that would extend and expand an eviction moratorium that was also included in the March coronavirus relief legislation but has since expired, prompting warnings that the nation will soon see a wave of evictions. Warren highlighted her bill in a tweet Tuesday:

Millions of people are staring at their bank accounts & have no idea how they’ll pay the rent today. My bill to extend & expand the eviction moratorium is ready to go. So is @SenSherrodBrown’s bill for rent assistance. What is the @SenateGOP waiting for? https://t.co/O5ty2K2yLC

Pelosi and Senate Minority Leader Chuck Schumer (D-N.Y.) marked the start of the month with a joint statement urging Republicans to agree to strong funding for rental assistance alongside other measures to support people across the country who are still struggling because of the pandemic.

“The rent is due today, but too many families won’t be able to make payments through no fault of their own—pushing them deeper into debt and the prospect of being thrown out of their homes,” the Democratic leaders said. “At the same time, millions face food insecurity, unsafe workplace protections, and being forced to send children to school when it is not safe to do so.”

This month in review: pic.twitter.com/ovx5utSWDW

“Right now, over 40 million Americans are at risk of eviction—yet Republicans refuse to recognize the needs of working families facing the accelerating threat of eviction and skyrocketing debt,” they continued, slamming the Senate GOP for continuing to ignore the HEROES Act and Trump for issuing a “weak and unworkable” executive order providing temporary relief to some renters and homeowners.

Pelosi and Schumer called on Republicans in Congress and the president to “stop following the returns from Wall Street and wake up to the problems of Americans living on Main Street.” They said that “Republicans must join House and Senate Democrats to respond to the growing need by doing everything in our power to keep families healthy, safe, and secure—in their own homes.”