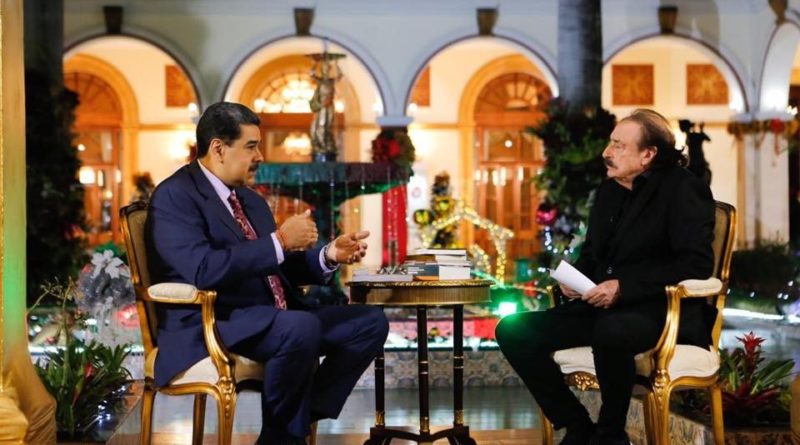 Venezuelan President Nicolás Maduro said Wednesday that Latin America will be a region where in 2020 integration will prevail over the imposed interests of neocolonialism. “The continent is an area in dispute and I am sure that in the years to come, in this year 2020 we will have very good news of how that dispute prioritizes the nationalist, independence, and integrationist interests of Latin America, over the interests of the monroist project, the interests of the Bolívar project and our liberators, over the outdated neo-colonial project, of the trumpist monroism, that they have tried to impose on us,” he said during the first interview of the year granted to the Spanish journalist Ignacio Ramonet.

He explained that this dispute was evident in Bolivia, with the coup d’état against the indigenous leader Evo Morales on November 10; which he said is “still underway” and he evaluated the de facto government that was installed in the hands of Jeanine Áñez, asserting that it has only managed to accommodate economic groups and deliver natural wealth to imperialism.


In the case of Argentina – where Alberto Fernández was inaugurated as president last December 10 -, the national President said that there was no social explosion since there is a powerful social and political movement led by Peronism managed to channel an electoral mobilization to put an end to the neoliberalism imposed by Mauricio Macri for four years.
“All the aggression against ALBA (The Bolivarian Alliance for the Peoples of Our America) is part of that struggle where imperialism intends to impose elites subordinated to their interests to govern and impose their model,” he said.

During the interview, the Venezuelan head of state warned that the neo-liberal political model is going through an exhaustion that is reflected in the questioning of the capitalist world about the consequences of its application that discard people’s social and human rights.
“We are attending a second cycle of exhaustion of the destructive neoliberal model and there is a questioning in the world of neoliberal capitalism and its destructive effects on people’s social rights, on employment, on pensions, on public education, on public health. It is a global questioning, in Europe, France and all of Europe,” he emphasized.
In addition, he recalled that the criticisms are also directed to climate change as a catastrophe that has been denounced to raise awareness of those who can generate the necessary changes and affirmed that organizations such as the International Monetary Fund (IMF) and the World Bank (WB) are not the answer for social justice, the development of peoples or for climate change.

In reference to the United States (US), President Maduro expects that the confrontation in the electoral field will intensify in January and will also depend on what is generated during the impeachment process against President Donald Trump for obstruction and abuse of power.
“Today, nobody can say what results there will be in the US elections, nobody! If there will be four more years of Trump, or if it will be a Democratic candidate, ”he said.

Ignacio Ramonet: Good evening, Mr. President, I would like first of all to thank you for granting me this interview, the first of the year 2020. Our conversations are already transforming into a journalistic tradition, because every January first, for several years, we have the opportunity to talk to make a critical assessment of the past year, in this case 2019, and on the other hand to analyze the perspectives and projects of the year 2020. I wish, this time, that we could talk about three topics: Venezuelan internal policy, economy, and also international politics both at the planetary level and at the Latin American level.

I would like to start with a first question about Venezuelan politics. There are going to be three questions for each topic. The year 2019 has been a year of strong intensity for Venezuela, particularly at the beginning of the year, when there was an attempted coup d’etat, supported by the United States and other countries, with the self-proclamation of Juan Guaidó; then, on February 23, there was that attempt to invade from the border with Colombia, with the “battle of the bridges”, under the pretext of humanitarian aid, and so on … However, you end this year 2019 presiding over a much more stable country that other States in the region that were in the front line to criticize, attack and even threaten Venezuela; I think of Colombia, I think of Chile, in particular,
President Nicolás Maduro: Well first of all I want to transmit to you and transmit to all those who listen to us and see us, my best wishes and all the blessings for the year 2020. The year 2020 has arrived and the third decade of the XXI century begins , incredible that we are already in the third decade. Indeed, these conversations already mark, from the political communicational point of view, a special moment, because we hold them on the first of January, we can carry out the evaluation of what we did, of what it was and what we plan to do, everyone can search the reference from year to year, to verify something very important, the coherence of the discourse and the practice of the action of the Bolivarian revolution. It’s very important.
What is the secret weapon, the key weapon so that the Bolivarian revolution has the capacity to face, to overcome so many aggressions, so many attacks, so many world campaigns, how many aggressions have we called multiform, multidimensional for the economy, to society, to politics, to institutions … what is our secret formula? That we have a real project, a national project, that this project has the legitimacy and support of the real people. We are real, I always say, like the wood of this table; we are real, we have a people, we have a democracy with its freedoms, we have solid institutions, well constituted according to the Constitution of the republic, we are real … what is the key, the secret weapon? I repeat: that we are for real, we have a legitimacy in the popular vote and we have strengthened institutions, and in addition Commander Chávez founded, or recast for this historical period of the 21st century, the civic union, the concept of Bolívar, the concept of the “general of the sovereign people” Ezequiel Zamora, a historical concept of the stellar moments of Venezuelan history, the concept of the military and civic union, a revolutionary union. It is not any ordinary military-civic union, no, it is the military-civic union to make revolution, to make a homeland, to build the Republic. That historical concept was consolidated, and we maintain it with great force, we maintain it as a vital spirit of the development of events in Venezuela.
And I believe that this is what gives us this permanent renewal of energy, of strength, of the real political power to face all circumstances and for us to overcome above all, and maintain the development of the Simón Bolívar national project, in any scenario that we have lived or we will have to live.