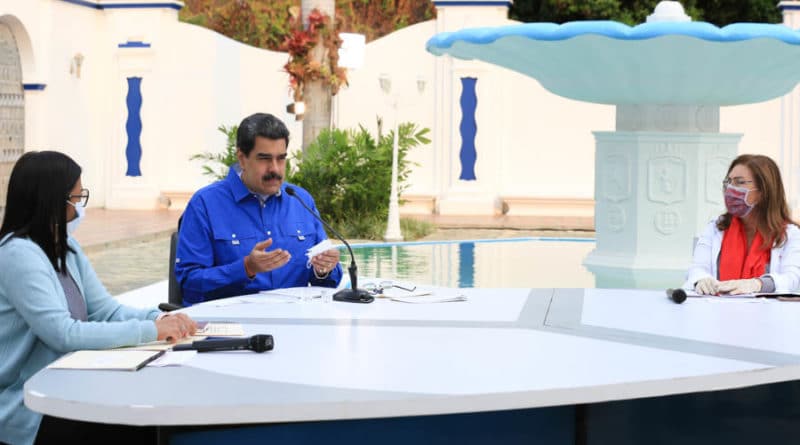 On Wednesday, April 15, the President of Venezuela, Nicolás Maduro, reported four new cases of Covid-19 coronavirus in the country, for a total of 197 cases. The total number of recovered patients is 111, meaning 56 percent of cases have recovered. No new deaths were reported.

Two [of the new cases] are resident in the Portuguesa state, Turén municipality. They are the husband (45 years old) and the son (16 years old) of a lady who had already tested positive, after coming back from a trip to Colombia. They are in the Casal Ramos de Araure hospital.
The third case is a 51-year-old man from Carayaca, La Guaira state. It is the eighth infected case in the security company that provides services to Empresas Polar, announced last Monday. He is in a private clinic and is asymptomatic.

The fourth case is a 46-year-old woman from La Fría, Táchira state. A merchant, with hypertension, diabetes, and mild renal failure, who makes frequent trips to Cúcuta (Colombia) to buy merchandise, where he was infected. Screened at the Simón Bolívar International Diagnostic Center.

“We have seen a pattern: the cases that we have determined in recent weeks are focused cases,” said the Venezuelan president. “The case of the security company, the case of the mayor’s office in Maneiro (Nueva Esparta), the cases of Boconó (Trujillo), and cases of families. This is important from a statistical point of view because we are going to get closer to the breaking point of the transmission chains, it is very important, the breaking of the transmission chain,” emphasized the Venezuelan president.

During his address, the head of state explained that of the total number of infected, 30 are hospitalized in CDI, 25 receive free treatment in hospitals, 20 are in private clinics, two are in isolation in hotels, while deaths remain at nine.

So far, Miranda remains the state with the most cases of Covid-19 with 68 infected; followed by the Capital District with 30 infected, thirdly Aragua with 29 confirmed cases and La Guaira with 14 infected.

For her part, the executive vice president of the Republic, Delcy Rodríguez, pointed out that the Presidential Commission for the Control and Prevention of Covid-19 has so far concluded that the number of recoveries exceeds the number of people infected and that this Tuesday it was decided to incorporate anticoagulants into the treatment protocol for coronavirus cases.

The president stressed that, in Germany and other countries, the debate continues on whether or not all citizens should wear a mask. He points out that in Venezuela that debate was held a long time ago, it was decided that the mask had to be obligatory and the popular power itself and the people made them on their own. He indicated that in those countries “time is being wasted” in the debate on the masks and there is even a call -in those countries- to reopen schools, high shools and universities in a very hasty way. He asks the rulers of those countries to reflect: “if their countries do not heal, it will be more difficult to heal the world,” he explained.

2,000 people who entered the country will return to their states this Thursday.
Approximately two thousand Venezuelans who entered the country through the border with Colombia, will return to their states of origin this Thursday, after being in quarantine and having undergone screening tests for Covid-19, Maduro said. These two thousand are part of the more than six thousand nationals who have already entered from the Colombian border. Many of them were victims of xenophobia, abuse and labor exploitation in other countries.

*Last Monday, Freddy Bernal, pointed out that the Venezuelans who return across the border are guaranteed a provision of food supplies and shelter, in order to fully comply with the quarantine – minimum 14 days – and thus avoid the spread of the coronavirus.

“5.8 tons of pork, 5.4 tons of beef, 25 tons of chicken and 60 tons of food have been distributed, exclusively to the 5,791 people we are serving at the Comprehensive Social Assistance Points (PASI)”, he indicated.

It should be remembered that, in addition, Venezuelans who enter through the border with Colombia, undergo mandatory rapid screening tests for Covid-19. Depending on the result, the PCR test is performed. If this is positive, the Venezuelan is treated at the CDI designated exclusively to serve Venezuelans who return to the country.