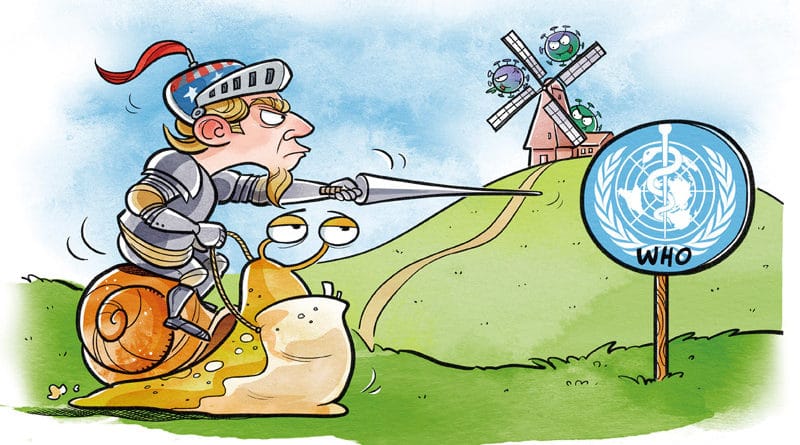 For decades, the United States has been antagonistic to the most important international organization on Earth – the United Nations. It is because the organization has periodically rebelled and refused to take direct diktats from Washington. Although greatly influenced by the West, the U.N. has always insisted on a certain degree of independence, for which it has been criticized, bullied and even directly ‘punished’ by several U.S. administrations. Budgets have sporadically been frozen, Member States intimidated, and the votes of many small countries outrightly bought to serve the interests of the West.

When intimidation did not work, and when the U.N. still insisted on acting independently, the United States regularly opted for direct action, as happened in 2018, when it left UNESCO, the United Nations Education, Scientific and Cultural Organization, slamming the door and leaving behind unpaid bills of more than one billion USD.

Now again, sparks are flying and threats, as well as derogatory statements are uttered with chilling arrogance and an air of superiority. This time the target is the WHO (World Health Organization), led by Dr. Tedros Adhanom Ghebreyesus.

The White House is doing all it can, to cover up its failure to contain the spread of COVID-19, the disease, which to date (10 April, 2020), has infected 491,358 citizens of the United States, killing 18,316, and forcing millions into the unemployment queues. Washington snaps at all those who dare to speak or write the truth: that it was China who first confronted and then defeated the coronavirus on its territory, saving countless lives and showing leadership and courage, before extending a helping hand, literally to all corners of the world.

Dr. Tedros has been working with Beijing since the very beginning of the COVID-19 outbreak, promoting its approach, suggesting that the United States follows China’s example.

However, Washington consistently refused to take advice from the U.N. health organization and from China. Instead, it triggered a shameless and deeply insulting smear campaign against both Beijing and, eventually, the WHO. We know the results: thousands of American people have died, unnecessarily.

As reported by the BBC on 4th April:

“The WHO approved a coronavirus test in January – but the US decided against using it, developing its own test instead. However, in February, when the testing kits were dispatched, some of them did not work properly, and led to inconclusive results.

Public health experts say the delay enabled the virus to spread further within the US.”

The White House accused the WHO, on several occasions, of being “China-centric”, which in the lexicon of the Western media translates as a “tremendous crime”, and “unwilling to replicate attacks against China, which originate in Washington, London, and other Western capitals”.

“The WHO really blew it. For some reason, funded largely by the United States, yet very China-centric. We will be giving that a good look.”

‘Giving that a good look’ means: threatening to cut funding to the WHO, first by approximately half, and soon, perhaps, fully.

If the U.S. stops funding the WHO, it would be a blow, but definitely not the end. Listening to the U.S. President, one would think that his country fully funds the U.N. health agency. That is not the case. The U.S. funding amounts to just over 10%. As reported by RFI:

Essentially, the White House is blackmailing the U.N. again. It is particularly disgraceful now, when millions of lives are in danger, and when the WHO is perhaps the most qualified international organization, in terms of its ability to fight the COVID-19 pandemic. It is stretched, overwhelmed, but fighting for the survival of millions, nevertheless.

Dr. Tedros snapped back at the U.S. meddling and criticism:

“The United States and China should come together and fight this dangerous enemy.”

A medical expert, a man who was trained to save human lives, Dr. Tedros did not realize that even during this awful time for our humankind, Washington would be putting its negative political agenda and its anti-Chinese campaign, first.

In fact, in order to cover up its grave mistakes, the White House began belittling the huge successes of its political adversaries, such as China, Russia and Cuba. Beijing, Moscow and Havana sent medical teams and essential equipment to the most affected countries in Europe and even to the United States, just to face cynicism and often ingratitude and dark sarcasm.

While China and Russia are putting up an internationalist and epic battle against COVID-19, Washington is increasing pressure on its victims, effectively killing people in Iran, Venezuela, Syria, and elsewhere, through its draconic and unjust sanctions and embargos. Absurdly, even one of the Russian companies, which recently sent ventilators to New York, is still officially under U.S. sanctions.

Washington has been also selfishly and ruthlessly snatching medical equipment that was originally destined for other, equally badly hit countries.

Washington’s anti-Beijing allies, particularly those in Taiwan, joined the spiteful campaign against Dr. Tedros, allegedly even insulting him for being “black” and a “negro”.

“WHO chief Tedros Adhanom Ghebreyesus said he had been subjected to racist comments and death threats for months.”

The WHO chief said the abuse had originated from Taiwan, “and the foreign ministry didn’t disassociate” itself from it.

Reacting to the attacks, United Nations Secretary-General António Guterres strongly defended Dr. Tedros and the WHO.

Using personal attacks against top experts, and even threatening to cut funding as a tool to muzzle the U.N., may backfire. Such an approach is increasingly resembling intimidation, and the world is watching. This is not how billions of people want to be governed. Not anymore. There are definitely much better alternatives.

This is an extremely complex historical moment for our planet; a moment when entire political and moral concepts are being re-written and re-thought.

Despite the malicious Western propaganda campaign, China and its allies are gaining recognition in all parts of the world. Their political systems are acknowledged as more successful, and more humane then those of the West, at least by many.