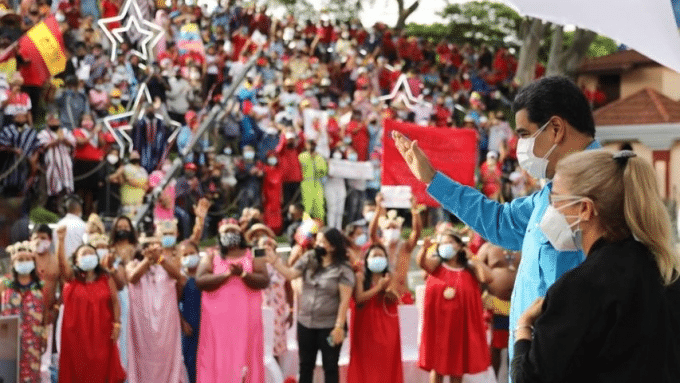 On Thursday, October 14, the President of Venezuela, Nicolás Maduro, sent a letter to the King of Spain, Felipe de Borbón, demanding respect for the memory of the ancestors of the American peoples, who, 529 years ago, were subjugated under the occupation of the Spanish empire, and suffered centuries of violence, genocide and destruction. Through his Twitter account, the Venezuelan president shared the letter in which he expressed his condemnation of the fact that Spain “intends to minimize and falsify the events that occurred during the so-called Conquest of America in the 15th century.”

In this regard, the Venezuelan Minister of Culture, Ernesto Villegas, retweeted the post with the message: “The Bolivarian Republic of Venezuela demands from the King of Spain a historical recognition of the genocide and ethnocide that depopulated a continent where between 70 and 90 million people lived, and alerts the Spanish people about the resurgence of fascism and supremacy.”

Below is the unofficial translation of the letter:

The present letter, which I address to you as the head of diplomacy of the Spanish State, is to express the indignation that as an Amerindian, multi-ethnic and multicultural people we feel in the Bolivarian Republic of Venezuela, when we see how 529 years later an event which, in the light of history and universal reason was one of the bloodiest conquests, continues to be celebrated.

It is unacceptable that in the XXI century a nation that prides itself for being civilized worships the worst of its past: robbery, pillage, racism and hate crimes, committed during more than three centuries of Spanish imperial occupation in the territory of Abya Yala.

The celebration of such events can only be understood by the countries that resisted the invasion as a vindication and reaffirmation of the most atavistic racism.

The arrival of Spain and the forced occupation of the American lands represented the most terrible physical and symbolic annihilation of entire peoples that the history of mankind remembers.

Our intention with this letter is to simultaneously raise a call of alarm to the Spanish people, to make an appeal to their historical conscience and their political reason, in the face of the resurgence of supremacism and fascism that takes us back to the darkest past of imperial Europe. With the emergence of extreme right-wing parties, discourses that attempt to minimize and falsify the events that occurred during the so-called conquest of America in the 15th century are becoming more and more common in Spain.

People continue to speak arrogantly of the “Hispanic Civilization” project, assuming that apart from Hispanicity there were no languages, cultures, civilizations, assuming as true the already obsolete prejudices of medieval ethnocentrism. Spokespersons of the neo-Phalangist tendencies refer to the events as the “Race Day,” and other more moderate ones use the insolent euphemism of the “Encounter of two Worlds.” Modern cynicism or outright ignorance? Whatever it may be, it is unacceptable both for the indigenous peoples still in resistance, and for the European people who pride themselves on being respectful of dignity and human rights.

From the brave denunciations of Friar Bartolomé de las Casas to the present day, there is ample documentation that highlights the cruel and violent dimension of colonization; violence and cruelty that are perpetuated in the attempts to whitewash, through propaganda, the vile killings and lootings.

The conquest in present day terms constitutes the greatest genocide and ethnocide, because it depopulated a continent inhabited by between 70 and 90 million souls, with their cultures, their political systems, their languages, their science, their religions, their institutions, which the conqueror never wanted to respect.

This year 2021, Venezuela celebrates the bicentennial of the Battle of Carabobo, a key event in which our nation expresses the strongest will of its independence, considering ourselves as children and heirs of our heroes and heroines.

As you will recall, Carabobo’s victory over the former Spanish empire marked the political birth of Gran Colombia, and it was not just the Spanish army that was defeated. Hernán Cortés died in Carabobo, as José Martí says in his decolonizing synthesis, and the millions killed by the sword and the greed of the invaders and colonizers, the millions of men and women subjected to slavery, were emancipated. In that field was buried the oppression that today is represented in the festive acts of so-called Hispanidad.

In Carabobo, three centuries of Indigenous Resistance reached its peak, whose uprising was led by Cacique Guaicaipuro in this valley, years after the invasion, and which spread throughout the continent, transcending ages until the present day. This letter is a faithful expression of that original cause.

It is not Columbus Day or Race Day or Discovery Day or Hispanic Day, it is the Day of Indigenous Resistance. This is much more than a change of name: it is a change of outlook, a spiritual change, a historical change to see the past and the future with different eyes.

Europe must recognize that its modernity and its vertiginous industrial, commercial and financial growth, that is, the rise of Western capitalism, had its foundations in a crime against humanity against the peoples of Indo-America and Africa, and in a material dispossession of their assets and riches that began on October 12, 1492. This is scientifically and testimonially demonstrable truth.

More than an apology, we want a rectification of the ideas and opinions that five centuries later seem more foolish and vile. What worries us is the neglect and minimization of these atrocious events that are at the origin of our current nations. We do not accept the trivialization and denial of the Indo-American genocide, which seems to us to manifest the danger and justification of new holocausts.

We love the people of Spain, we speak the same language: it was a Venezuelan, Andrés Bello, who enriched it with his grammar. Christianity found in indigenous spirituality a heritage that gave it uniqueness and richness. We enjoy their culture, which is in turn the result of Arab heritage and mixing, and we do so from our own. That is why we are not prepared to tolerate mockery, cynicism and historical falsifications.

With the Bolivarian Revolution, contemporary Venezuela undertook a journey inwards, towards its origins, and has resolved to build a decolonized future through the intercultural formula. This ethic allows us to contribute to humanity methods of civilizing dialogue, values ​​of a plural memory and a multiple identity.

Truth. Truth. Venezuela demands the truth, because we have known firsthand the destructive power of lies. We have enough documentary material throughout the Spanish-speaking universe for establishing a Truth Commission to determine an unbiased version of the conquest of America that could shut up the new obscurantisms and unmask what its institutions today want to hide: the bloodiest episode in the history of mankind.

Mexican President Andrés Manuel López Obrador, in his 2019 letter addressed to you, proposed the reconstruction of a “shared history” that, in keeping with the truth, would bring the peoples of Spain and Mexico closer.

We join in the demand for a sincerity in the historical truth that, recognizing the excesses, would allow a reconciliation of the peoples in their shared humanity. Indo-America carries a wound in its memory that still bleeds. We do not accept oblivion and indolence as a response.

Venezuela is, in its scale, one of the largest recipients of immigrants in the world. Among our 30 million inhabitants, we have welcomed 6 million Colombians, hundreds of thousands of other Latin Americans and people of the Caribbean, Arabs, Chinese, Spanish, Portuguese and Italians.

In over 500 years since the European invasion, we have refined a multiple and diverse race, broad and generous, a cosmic race, as José Vasconcelos would say, representative and spokesperson of all the races of the world.

“The blood of our citizens is different, let us mix it to unite it,” exhorted Bolívar in Angostura, in 1818. “Let us bear in mind that our people are not European, nor North American. Rather, it is a mixture of Africa and America, instead of an emanation of Europe: because even Spain itself ceases to be European because of its African blood, its institutions and its character. It is impossible to properly assign to which human family we belong.”

The Liberator was prophetic: Isn’t it true that today the Europe that looks from the “North of the Pyrenees” treats the Spanish people with the same contempt that it dispenses towards Africans, Arabs and Latin Americans?

A Hispanidad without recognition and forgiveness, without truth and moral compensation for crimes and dispossession, is an empty shell that only serves for the photograph of a club of right-wing presidents.

We aspire to an Interculturality, and this is only possible through respect and positive valuation of our differences.

As a Catholic, I am proud of the mettle of Pope Francis in admitting ecclesiastical excesses during European rule: but we are ecumenically united with other Christians, Muslims, the devotees of Chango and María Lionza, as well as with Buddhists, the Taoists and agnostics.

If we really want a reconciliation, let us have the level to do it in a multinational and multicultural brotherhood, with ties of spirit and blood. All this must happen, we insist, through the acceptance of historical truth, and shed light on that dark knot that unites us and separates us.

The 21st century is ripe for a Truth Commission on the European occupation of America from the 16th to the 19th century. In this way we would bridge the gap between the golden legend and the dark legend that will continue to divide us in infinite progression.

A commission led by CELAC and made up of shamans, anthropologists, archaeologists, human rights defenders, jurists, writers and intellectuals, representatives of all religions, among others, that allows us to measure the facts, accept them, repair them and incorporate them into the same history.

Today, October 14, Month of the Indigenous Peoples, Year 529 of Resistance and Struggle for Truth and Hope.

From our Indian side, republican and independent.

Featured image: President Nicolas Maduro and his wife and Deputy Cilia Flores during a public event for celebration of the Indigenous Resistance Day on October 12. Photo: Prensa Presidencial