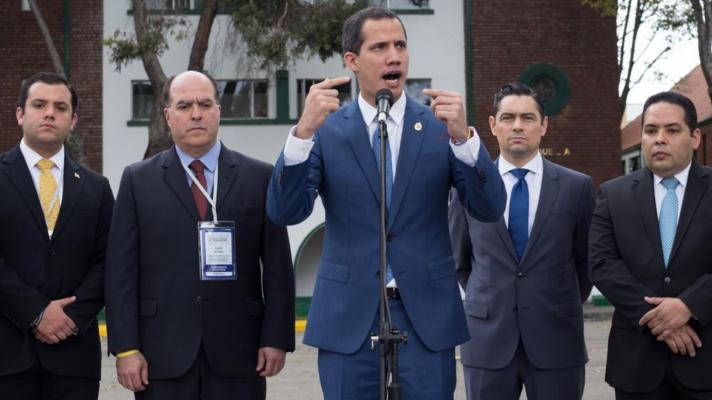 The following is a translation of the report of the Samuel Robinson Institute for October 14, 2021.

As a fallout of the recent scandals surrounding the Venezuelan company Monómeros, which was hijacked by Juan Guaidó in 2019 and is currently in a highly vulnerable position, the divisions intrinsic to anti-Chavismo have returned to the fore; this time, however, with a different content.

The Context
The intervention in Monómeros by the Superintendency of Corporations (a regulating body attached to the Colombian Ministry of Commerce) was followed by allegations of corruption from Humberto Calderón Berti and a series of improvised statements and decisions by the illegal board of directors imposed by Guaidó. All this seems to have ended definitively the honeymoon of the fake government which had depended on the looting of Venezuela’s public assets.

Borges vs. Guaidó
Faced with an imminent scandal, Julio Borges, leader of Primero Justicia party (PJ), who is directly linked to the corruption schemes surrounding Monómeros, decided to distance himself from the fake government and hold former deputy Juan Guaidó entirely responsible for Monómeros. In this way, from overseas, Borges tried to reduce the visibility of his participation in the embezzlement of Venezuelan assets in Colombia while trying to reposition himself politically.

Moving forward
Pressured by public opinion and by his own collaborators, Guaidó then tried to manage the situation by announcing a not very detailed “audit,” together with a barely defined “restructuring,” which did not really address the underlying problems of Monómeros. Consequently, Guillermo Rodríguez Laprea, general manager of Monómeros, was removed despite being illegally assigned to the position by Guaidó himself months ago.

More fuel to the fire
Far from mitigating the tensions, Guaidó’s damage control maneuvers had a multiplier effect. Borges questioned Guaidó’s announcements by stating that, “Out of nowhere and in a totally illegal and poorly done way, Guaidó announces that he, unilaterally, without any type of conversation, has restructured Monómeros without any prior investigation. This has led everyone to suspect and be angry about the whole situation, because the logical thing is to investigate.”

More conflicts
There are other factors involved in the confrontation. Former Colombian ambassador to the US and distinguished Uribista, Francisco “Pacho” Santos, asserted that Julio Borges should resign from his position as international coordinator of Guaidó’s fake government, and accused him of wanting to “overthrow Guaidó” and of “cohabiting with Maduro.”

Interests, only interests
The G4 coalition around the “Guaidó project” was part of a dynamic of interests, mostly mafia-like interests, the central core of which was the pillaging of public assets and access to international funds. Now that this dynamic has been broken by inequality in the distribution of the loot, the illusion of harmony has lost its effect and confrontations have emerged once more into an endless loop.

Borges’ calculation
Primero Justicia quickly joined the talks in progress in Mexico City and has launched its best players for the November 21 mega-elections, taking advantage of the paralysis of the Leopoldo López and Juan Guaidó group. Borges’ wager consists of accelerating Guaidó’s reputation crisis in order to take out a direct competitor, the Voluntad Popular party, within G4. This would allow PJ to take the helm of the opposition after the elections, depending, of course, on electoral results and the power quotas gained in it.

Featured image: The divisions in anti-Chavismo have returned to the fore, with Guaidó getting solely blamed for the Monómeros disaster. File photo.