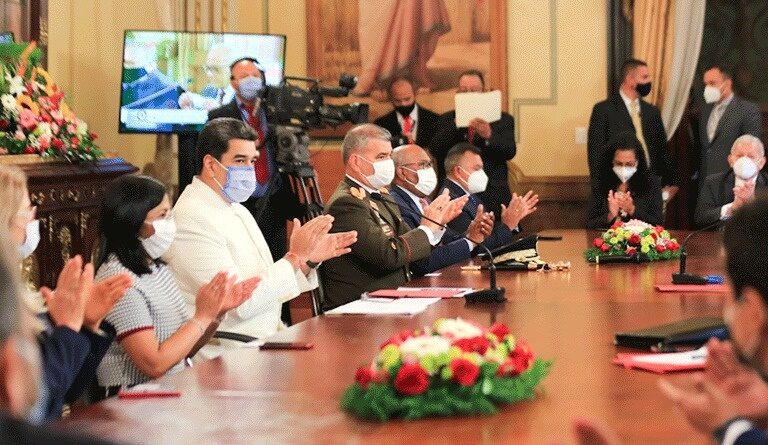 The President of Venezuela, Nicolás Maduro, placed himself at the command of the National Assembly to consolidate dialogue, democracy and inclusion in Venezuela.

The Head of State, who welcomed each of the opposition deputies, said “if we have learned anything, it is that we must live together, we must abandon useless confrontation, we must learn to speak the language of Venezuelans. Venezuela belongs to all of us.”

He recalled that it was on September 16, 2018, when after several attempts, it was possible to install a dialogue and begin to write “this story that ends with a happy ending: the election and constitutional inauguration of the legislative branch of the country.”

He recognized the opposition politicians, who despite having been demonized, had the courage to take that step on the right path towards dialogue and the search for solutions.

Likewise, he questioned the treatment that the international press gives to his mandate, and in this sense he stressed that it is not about the Maduro regime, but about the republican, constitutional and democratic regime of Venezuela which, he said, is “susceptible to perfecting and improving.”

In this regard, he said “my school is not the school of dictators, the School of the Americas. My school is the union, student struggle, cultural work in the neighborhoods. My school is Hugo Chávez Frías, who was also mistreated by that press and the West that believes itself to be the owners of the world.”

He stressed that this new political cycle that begins, “augurs for great steps of economic, social and comprehensive recovery.”

He considered it necessary to open an investigation into the $1.7 billion of humanitarian aid that the United States government gave to former opposition deputy Juan Guaidó.

“Where did that money go, who took that money?” Maduro said, commenting that hopefully the new United States Congress will investigate what happened with those resources.

Previously, a parliamentary commission headed by the president of the new National Assembly, Jorge Rodríguez, and made up of deputies Bernabé Gutiérrez, Javier Bertucci, Luis Romero, Timoteo Zambrano, Iris Varela, Didalco Bolívar, Hermann Escarrá and Génesis Garvett, handed over to him the official notification of the inauguration of the Venezuelan Parliament for the 2021-2026 term.

Upon receiving it, the Head of State referred to the effort, work, dialogue and dedication that has been required to reach this communication, which, he said, should be archived for history. The activity took place in the Simón Bolívar Room of the Miraflores Palace.