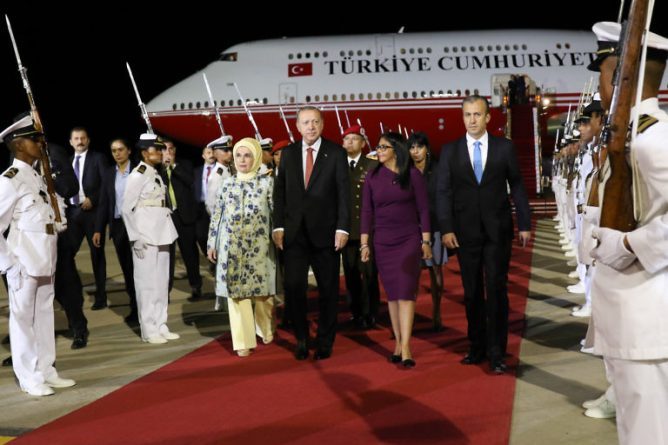 Last September, during the visit to Venezuela of the Turkish Foreign Minister Meylut Cavusoglu, he said that the meeting between the presidents of Venezuela, Nicolás Maduro and his counterpart Recep Erdogan, would take place after the G-20 summit in Argentina.

President Recep Tayyip Erdogan himself mentioned his intention to visit Venezuela in statements offered in New York, in October when he attended the 73rd General Assembly of the United Nations (UN). On that occasion he mentioned that he would probably come to the country after the summit of the Group of 20 (G20), between November 30 or December 1. Venezuela and Turkey have worked together on tourism, energy, among other areas. Recently both countries signed an economic-commercial agreement of cooperation and mutual benefit.

During the month of September both nations signed agreements in specific areas of agricultural production and tourism.

Erdogan has repeatedly declared his support for the President of the Republic, Nicolás Maduro, and all the people of Venezuela before the unilateral sanctions imposed by the United States government.

In mid-September, the Chancellor of the Republic of Turkey, Mevlüt Çavusoglu, visited Venezuela and assured that there are Turkish businessmen interested in investing in Venezuela because they have seen their potential, specifically in agriculture, tourism, construction, infrastructure, energy, mining , and in other areas that the Venezuelan Government requires the participation of these investors.

The airline Turkish Airlines announced that it will increase the frequency of its flights to Caracas to seven weekly flights; that is, a daily flight and also seven additional flights with freight from Turkey.

“That means that Turkish Airlines has discovered the potential that exists in Venezuela,” the Turkish foreign minister stressed at that time.

Venezuela and Turkey ratified their will and commitment to work together for the full development of their potential since early 2018 and the economic issues addressed in the visit of President Maduro by the Eurasian nation respond to the idea of strengthening mining relations, agriculture and tourism.