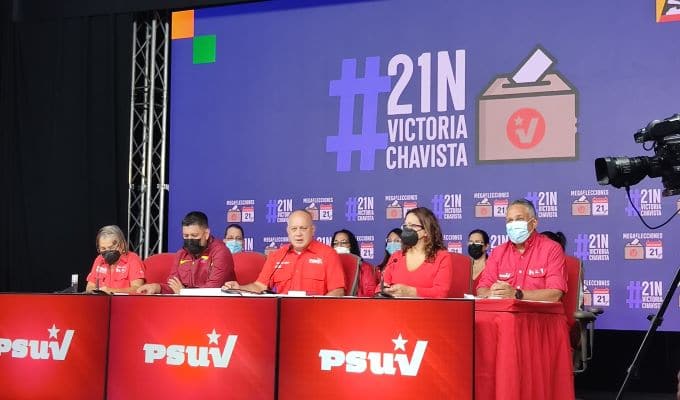 The United Socialist Party of Venezuela (PSUV) is ready to register all the candidates of the Great Patriotic Pole who will participate in the regional elections scheduled for November 21, when “the revolutionary forces will achieve a considerable electoral victory,” announced the president of the Electoral Commission of the red party, Diosdado Cabello, during a press conference offered this Friday August 27.

“Today, there are not only conditions for the November 21 elections, there is time for (the opposition) to prepare, and get ready, because on November 21 the revolutionary forces are going to beat them,” said Cabello.

The PSUV leader specified that electoral conditions have always been present in Venezuela. However, he pointed out that some sectors of the opposition have only recognized the electoral results when they win.

“There is a clear unity in the Bolivarian Revolution. From here, as we said, we have emerged stronger. I ask all those comrades who participated in the primaries of our party to join us once and for all, to accompany the comrades who are our candidates,” urged Cabello.

He explained that, according to the request by the President of the red party, Nicolás Maduro, the pre-candidates who managed to reach 95% of the votes during the primaries elections won, and their victory has been respected, so as of this August 27, the Simón Bolívar Great Patriotic Pole (GPP) presents its candidates, heading for a sizeable electoral victory on November 21.

“The United Socialist Party of Venezuela, the Great Patriotic Pole, is strictly complying with all the instructions given by the National Electoral Council,” said Cabello.

The leader of the PSUV said that this process of mega-elections of governors, mayors, legislators, and councilors, which will take place on November 21, is unique to the the Bolivarian Revolution, in which the people are vested with the power to express their wishes.

He stressed that this Saturday, the list of candidates will be delivered to the National Electoral Council to comply with the established schedule: “We will be attentive to hear to what the people want,” said Cabello.

At the same time, he reminded the population that they must take action against COVID-19 during the upcoming electoral processes.

In another part of his statements, Cabello regretted the suffering of the people of Mérida due to the torrential rains in the state. “We send all our solidarity, affection, and respect to the people of Mérida for everything that has happened due to the rains, and to the other [affected] states as well,” said Cabello. “The youth of the Party has been deployed to help.”