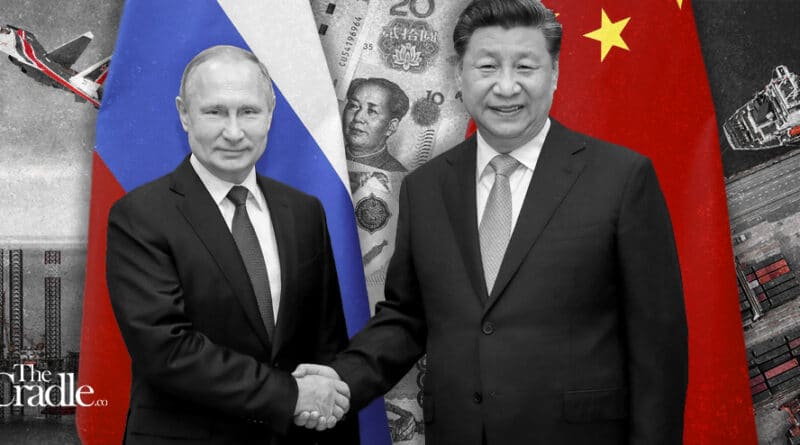 Vladimir Putin got straight to the point. At the opening of his one hour and fourteen minute video conversation with Xi Jinping on 15 December, he described Russia-China relations as “an example of genuine inter-state cooperation in the 21st century.”

Their myriad levels of cooperation have been known for years now – from trade, oil and gas, finance, aerospace and the fight against Covid-19, to the progressive interconnection of the Belt and Road Initiative (BRI) and the Eurasia Economic Union (EAEU).

But now the stage was set for the announcement of a serious counter-move in their carefully coordinated ballet opposing the relentless Hybrid War/Cold War 2.0 combo deployed by Empire.

As Assistant to the President for Foreign Policy Yuri Ushakov succinctly explained, Putin and Xi agreed to create an “independent financial structure for trade operations that could not be influenced by other countries.”

Diplomatic sources, off the record, confirmed the structure may be announced by a joint summit before the end of 2022.

This is a stunning game-changer in more ways than one. It had been extensively discussed in previous bilaterals and in preparations for BRICS summits – mostly centered on increasing the share of yuan and rubles in Russia-China settlements, bypassing the US dollar, and opening new stock market options for Russian and Chinese investors.

Now we’ve come to the crunch. And the catalyzing event was none other than US hawks floating the – financially nuclear – idea of expelling Russia from SWIFT, the messaging network used by 11,000+ banks in over 200 countries, as well as financial institutions, for rapid money transfers worldwide.

Cutting off Russia from SWIFT would be part of a harsh new sanctions package developed in response to an ‘invasion’ of Ukraine that will never happen – mainly because the only ones praying for it are professional NATO warmongers.

That amounts to a serious game-changer for the entire Global South – as scores of nations yearn to be released from a de facto US dollar dictatorship, complete with recurring Fed quantitative easing circus packages.

Russia and China have been experimenting with their alternative payment systems for quite a while now: the Russian SPFS (System for Transfer of Financial Messages) and the Chinese CIPS (Cross Border Interbank Payment System).

It won’t be easy, as the most powerful Chinese banks are deep into SWIFT and have expressed their reservations about SPFS. Yet, they will have to inevitably integrate prior to the launch of the new mechanism, possibly in late 2022.

Once the most important Russian and Chinese banks – from Sberbank to the Bank of China – adopt the system, the path opens for other banks across Eurasia and the Global South to join in.

In the long run, SWIFT, prone to non-stop American political interference, will be increasingly marginalized, or restricted to Atlanticist latitudes.

Bypassing the US dollar, on trade and all sorts of financial settlements, is an absolutely central plank of the ever-evolving Russia-China notion of a multipolar world.

The road will be long, of course, especially when it comes to offering a solid counterpoint to the US-controlled global financial system, a maze that includes the humongous investment houses of the BlackRock, Vanguard and State Street variety, with their interlocking shareholding of virtually every major multinational company.

Yet a SWIFT escape will rapidly gain momentum, because it is inextricably linked to a series of developments that Putin-Xi touched upon in their conversation, the most important of which are:

1. The progressive interconnection of BRI and EAEU, offering expanding roles to the BRICS-run New Development Bank (NDB) as well as the Asia Infrastructure Investment Bank (AIIB).

2. The increasing geopolitical and geo-economic reach of the Shanghai Cooperation Organization (SCO), especially after the admission of Iran in October.

3. And crucially, the upcoming Chinese presidency of the BRICS in 2022.

China in 2022 will invest deeply in BRICS+. This expanded BRICS club will be linked to a development process that includes:

1. The consolidation of the Regional Comprehensive Economic Partnership (RCEP) – a massive East Asia trade deal uniting China, the ASEAN 10 and Japan, and South Korea, as well as Australia and New Zealand.

Anchoring West Asia
Yaroslav Lissovolik, one of the world’s leading experts on BRICS+, argues that it’s now time for BRICS+ 2.0, operating in a system that opens “the possibility for bilateral and plurilateral agreements to complement the core network of regional alliances formed by BRICS countries and their respective regional neighbors.”

So if we’re talking about a major qualitative jump in terms of economic development across the Global South, the question is inevitable. What about West Asia?

All these interconnections, plus an escape from SWIFT, will certainly profit the China-Pakistan Economic Corridor (CPEC), arguably the flagship BRI project, to which Beijing plans to annex Afghanistan.

CPEC will be progressively connected to the future Iran-China corridor via Afghanistan, part of the 20 year Iran-China strategic deal in which BRI projects will be prominently featured. Iran and China already trade in yuan and rials, so settlements between Iran and China in a non-SWIFT mechanism will be a given.

What happened to Iran is a classic example of SWIFT becoming hostage of imperial political manipulation. Iranian banks were expelled from SWIFT in 2012, because of pressure from the usual suspects. In 2016, access was restored as part of the JCPOA, clinched in 2015. Yet in 2018, under the Trump administration, Iran was once again cut off from SWIFT.

None of that will ever happen with Iran joining the new Russia-China mechanism.

And that leads us to the interconnection of China’s BRI expansion in Iran, Iraq, Syria, Lebanon and Yemen. The reconstruction of Syria may be largely financed via the non-SWIFT mechanism. Same for China buying Iraqi energy. Same for the reconstruction of a Yemen possibly hosting a Chinese-owned port, part of the “string of pearls.”

Saudi Arabia, the Emirates and Israel may remain in the US financial sphere of influence, or lack thereof. And even if there is no BRICS nation anchoring West Asia, and no regional integration economic agreement on the horizon, the role of the economic integrator is bound to be eventually played by China.

Both BRI and the EAEU will get a tremendous boost by bypassing SWIFT. You simply can’t go multipolar if you trade using (devalued) imperial legal tender.

BRI, EAEU and those interlocking economic development agreements, combined with digital technology, will be integrating billions of people in the Global South.

Think of a possible, auspicious future spelling out cheap telecom delivering financial services and world market access, in a non-dollar environment, to all those who have been so far cut off from a truly globalized economy.