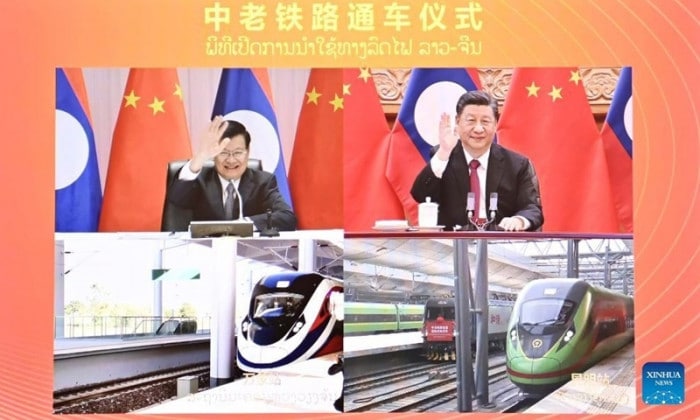 The 1,035-kilometer-long China-Laos Railway, a signature project under the China-proposed Belt and Road Initiative, officially went into full operation on Friday, catapulting the landlocked Southeast Asian nation into a Chinese standard-powered modern railway era that honors China’s promise of enabling inclusive growth along the BRI routes.

The opening of the China-Laos Railway will make Laos’ dream of becoming a land-linked hub come true. China will ensure the maintenance and security of the railway and build high-quality, sustainable and people-friendly economic belts along the route, President Xi told Thongloun via video link.

Xi stressed that both China and Laos adhere to the leadership of the Communist Party and the socialist orientation, which is the essence of their bilateral relations. The two sides should jointly safeguard the political and institutional security of China and Laos.

Xi said serving the people is the common purpose of the two parties, and the relationship between China and Laos should also emphasize the people’s supremacy to benefit the people of both countries more.

The first train of the China-Laos Railway left on Friday afternoon soon after the cross-border railway was officially put into operation. Among the cargo loaded on the train were potash products manufactured by a China-Laos joint venture named Sino-Agri International Potash Company, according to the Xinhua News Agency.

The thrill of getting on board new bullet trains in Laos, where locals’ impression of railway had long been underwhelmed by a 3.5-kilometer run-down railway connecting Laos’ capital Vientiane and Lao’s border with Thailand, is seen as effectively silencing unfounded Western criticism over BRI-enabled benefits, according to regional affairs watchers and those participating in the dream-come-true project.

New chapter in Laos’ history
The China-Laos Railway, the biggest public project in Laos’ history, links Kunming of Southwest China’s Yunnan Province with Laos’ capital Vientiane, including a 106-kilometer section from Kunming to Yuxi in Yunnan with a designed speed of 200 kilometers per hour, which had already been put into operation in December 2016.

The Yuxi-Mohan section was built by China Railway Kunming Group, while the Mohan-Vientiane section, largely within Laos, was built by a China-Laos joint venture.

As a landmark project of the BRI as well as China-Laos friendship that entirely adopts Chinese standards, the railway will provide strong support for accelerating the completion of the China-Laos Economic Corridor and building a China-Laos community with a shared future, read the China Railway statement.

The China-Laos railway is envisioned to directly boost cargo connectivity, turning Laos from a landlocked nation into a logistics center in the Southeast Asian region, facilitating interconnectedness between not only China and Laos, but also between Laos and ASEAN and between China and ASEAN, Gu Xiaosong, dean of the ASEAN Research Institute of Hainan Tropical Ocean University, told the Global Times on Friday.

The railway will be a big boost to Laos’ economy, Gu said, expecting commodities hailing from Southeast Asia to be shipped to China via Yunnan before being exported to Europe through China-Europe freight trains for there to be wider-ranging connectivity between the two continents.

More investments are expected in Laos after the railway opens, as businesses will be promoted, the expert said.

The operation of the China-Laos railway sparked hopes for better regional connectivity.

A source close to the development of the Thailand-China High Speed Rail, currently under construction, told the Global Times on Friday that roughly 5 percent of the railway’s first leg has been completed as of this week.

China’s national broadcaster CCTV reported in March that the first 251-kilometer leg connecting the Thai capital, Bangkok, and Nakhon Ratchasima, better known as Korat, in northeastern Thailand, is expected to be completed and open to traffic in 2026.

Work has begun on eight bid segments totaling 140 kilometers, according to the source.

“Business executives are optimistic that the railway will turn Laos into a major transport hub including the route between Southeast Asia and Europe, given that the time it will take to transport freight by rail will be reduced threefold to just more than 10 days,” according to Vientiane Times.

Prior to the availability of the new railway, many average folks in Laos barely had a chance of taking a train trip, with the 3.5-kilometer railway that placed Laos fourth to last on a global ranking of 146 countries and regions for railways – according to media reports – falling short of local needs for modern rail technology.

Laos is an underdeveloped economy that primarily relies on agriculture, and the China-Laos Railway will be capable of handling cargoes of vegetables and fruits from not only Laos, but neighboring countries such as Thailand, Vietnam and Cambodia, to China, Li Jiye, director of the marketing and planning division of the freight transport department at China Railway Kunming Group, told the Global Times.

The railway connects Laos with “not only China, but the entire BRI network,” the World Bank said in a report in 2020. It is estimated to lower transport costs by some 30-50 percent depending on the method of calculation, and is expected to increase trade between China and Laos to 3.7 million tons by 2030 from 1.2 million tons in 2016, the World Bank said.

BRI efforts speak louder than noises
The actual train experience is seen to effectively silence the noises with ulterior motives that habitually resort to unfounded claims of “debt trap” and are evilly intended to smear the BRI, experts said.

Western countries do not understand the current development mode of emerging countries, which is different from how they developed, Xu Liping, director of the Center for Southeast Asian Studies at the Chinese Academy of Social Sciences in Beijing, told the Global Times on Friday.

Such hype was hardly a scarcity on Western media that has long spared no effort to downplay the benefits of the BRI.

“Laos might be forced to take over repaying the joint venture’s full $3.5 billion debt to keep the line running if the company defaults and Chinese partners choose not to put in more money,” the Associate Press reported Thursday, citing a report for AidData, a research project at Virginia’s College of William & Mary.

That equals to nearly a fifth of Laos’ economic output in 2020, the report claimed.

“The saying of ‘debt trap’ is out of misunderstanding by Western countries. Meanwhile, the operation mode of the railway projects initiated by China is different from the ‘traditional’ Western mode,” Xu said.

China opened supporting industrial parks and logistics parks along the railways, which will greatly improve the economic level of the areas covered by the railway network, while Western railway companies mainly make money by selling tickets to passengers, according to Xu.

“I don’t look at it as China trying to bankrupt Laos… it’s not a Trojan Horse strategy. I think it’s going to be a win-win situation,” the Bangkok Post reported on Friday, citing Bangkok Bank chief economist Burin Adulwattana who said that the project could be an economic “game changer.”

Moreover, the China-Laos Railway has conscientiously readied itself for the full operation in the face of the still-raging COVID-19 pandemic, resoundingly relieving worries that the virus situation in Laos might cast a cloud over the land railway’s operations.

In terms of epidemic prevention and control, the China-Laos railway will guarantee no direct personnel contact and carry out strict disinfection and sterilization treatment on cargo, according to Li at China Railway Kunming Group.

Chinese drivers and crew members will park the train in the designated area in Laos and then return to China with the locomotive, and staff members from Laos will drive the train away. There is no direct contact between the two sides, according to Li.

“Besides Customs routine disinfection of cargos and goods, railway departments also have corresponding measures and preplans. We have the confidence to do a good job in epidemic prevention and control,” said Li.

That the railway was greeted with a thundering welcome in Laos also speaks convincingly of the Lao people’s eagerness for the dream project.

“This ceremony marks a monumental and historic milestone in the development of modern infrastructure for Laos. It’s a proud moment for the Lao people to realize this dream,” said Thongloun, as quoted by the Laotian Times.

Thongloun described the railway as a wonderful gift for the Lao people on the occasion of Lao National Day that fell on the previous day.

For Vou Chanthaxay, 31, a local worker at Yunnan Rubber Investment Company, the railway has already brought considerable changes to himself and his hometown, according to Xinhua.

“On this special day, I made a wish that I can travel by this railway to visit China with my family some day,” said Vou.