It is said that all comparisons are odious, but at the same time they are inevitable. In the case of Colombia and Venezuela, the comparison between the political systems of the two countries is constantly made by the Colombian political class, and is backed up by the cartels that form its media corporations and its powerful entertainment industry, which insist without allowing room for doubt that while Colombian democracy is old, strong and in good health, Venezuela has degenerated into a dictatorship.

This caricature is thoughtlessly repeated even by broad sectors of the Colombian opposition out of ignorance, fear, or laziness in critically analyzing the propaganda with which they are bombarded daily and, under this veil, it would be impossible to trace the course of the deep transformations that the country needs.

The media war against the Bolivarian Revolution that has Miami, Madrid and Bogota as its axis, the lawfare under construction against President Nicolás Maduro himself and the political guidelines emanating from the United States that sustain that propaganda, derive from the complex geopolitical context generated by the global capitalist crisis, the mortal wound of the unipolar world and the consequent relaunching of the Monroe Doctrine on Our America.

That is why we have decided to make this comparison starting from the statement that breaks with what is usually said: neither is Colombia as good as it is portrayed nor is Venezuela as bad as it is said to be.

With this counter-hegemonic intention, we do not intend to say that Venezuelan democracy is perfect because, like any social process, the Bolivarian Revolution is imperfect and can always be made better.

Today, the seriousness of this belief, so deeply installed in the Colombian public opinion, takes more importance in view of the events of this week, when Minister of Defense Diego Molano once again made statements aiming to generate a binational conflict, since one of his central arguments is that in Venezuela there is a dictatorship and in Colombia a democracy worthy of exporting.

At this moment in which uribismo knows it has lost, since two decades of executive power are about to come to an end within only five months, either by the expected triumph of the progressive and leftist sectors that have united in the Historical Pact, or by the triumph of other center-right and right-wing alternatives that respond to more traditional interests of the Colombian oligarchy, all far from Uribe; only the worsening of the internal conflict and the threat of an international conflict could perhaps change the result that already seems imminent. Therefore, it is once again an urgent task to defeat the pro-war language of the Uribe government.

On this side of the border, the affirmation that in Venezuela there is a dictatorship while in Colombia there is an exemplary democracy is endorsed by the Venezuelan opposition, legitimizing it in some popular sectors with the permanent support of transnational media corporations and the Colombian entertainment industry that is widely disseminated through social networks.

Having explained the reasons for this analysis, which is made in defense of both peoples and in pursuit of peace, we provide nine points from which to begin a comparative analysis of the health of democracy in both countries.

It is important to clarify that the following comparison focuses on the actions of the States and their governments, since there are undoubtedly real and nourishing experiences from the Colombian popular organizations that are advancing in the construction of true democracy.

The nine points proposed for the comparative analysis are as follows:

1. Relationship with the United States as the center of the capitalist empire
Colombia is a State subordinated to the United States. This implies an absolute surrender of its natural, mining and energy resources, its great labor force and the concession of its regional geostrategic importance to convert the country into a center of accumulation by dispossession, the main military enclave of the United States and one of the two enclaves of drug trafficking in the continent. US interference in internal affairs is absolute and the word “sovereignty” has disappeared from political speeches, even from the so-called progressivism, remaining only in the minority voices of the true left.

The Venezuelan State, for its part, is an insubordinate State, from its own Bolivarian doctrine, historically confronted with the Monroe Doctrine. This insubordination has cost it a political, economic and even military siege from the Northern power. Harassment that in 2015 reached the extreme of declaring it “an unusual and extraordinary threat” to the security of the United States. That executive order has sustained a brutal blockade, with serious consequences for the Venezuelan people and is the root of the emigration phenomenon.

2. Political power of the oligarchies
Political power in Colombia has been in the hands of the most economically powerful families in the country for about a century and a half, which increasingly turns it into a plutocracy. With the aggravating factor that, in the last three decades, this oligarchy has been intertwined to a greater or lesser degree with drug trafficking and paramilitarism.

On the other hand, only 22 years ago, the Bolivarian Revolution broke out, and with it, the Venezuelan oligarchy that had traditionally held political power in the twentieth century and most of the nineteenth century, was displaced from political power.

3. Armed conflict
Colombia is a country at war. It is immersed in a social and armed conflict that remains unresolved and is once again tending to worsen. The democratic solution would be the political and negotiated solution that broad sectors of the Colombian people have been demanding, however, the oligarchy’s bet has been on a military solution with which it seeks to pacify the people and win the war, that is to say, it bets on pacification which is very different from peace.

On the contrary, Venezuela remains at peace despite the military siege by the United States, the paramilitary invasion of Venezuelan territory from Colombia, the incursion of mercenaries and the repeated execution of terrorist operations for territorial control popularly known as guarimbas. What is most relevant for this comparison is that in the face of the violence generated by the last guarimbas in 2017, President Maduro resorted to the maximum expression of democracy which is the call to Constituent Power. The day after that call the sectors that were promoting violence demobilized and no similar operation has taken place again since then.

4. Communicational hegemony vs. counter-hegemonic communication
Colombian media corporations are in the hands of three families which are among the four richest in the country, so that, despite occasional disputes of interests, the narrative is unified in defense of oligarchic power, in favor of the world capitalist system and imperialism. The alternative and popular media are permanently attacked and persecuted, and hence communicational hegemony of the media corporations is overwhelming.

5. Land ownership
Although the latifundia is historical throughout Our America and particularly in the two countries in question, in Colombia, in the last six decades, the peasantry has been dispossessed of nearly eight million hectares in a coordinated action among large landholders, transnational companies, drug traffickers, military forces and, above all, paramilitaries.

In Venezuela, thanks to the enactment of a new land law during the government of President Hugo Chávez, close to 6 million hectares have been rescued and expropriated from large landowners. Most of these lands, with evident critical knots and some setbacks in recent years, have been awarded to peasants.

This means that while in Colombia the tendency is to concentrate land ownership, in Venezuela a process of deconcentration of land ownership has begun.

6. Uses of language in the National Constitutions
Venezuela has the first constitution in Spanish in the world that used inclusive language, that is, written by and for all its citizens—men and women. Although the current Constitution of Colombia was also the product of a more or less recent Constituent Assembly, it continues to use exclusionary language in which only the masculine forms are used, and it does not take into account the great struggles of Colombian women for inclusion.

7. Respect for human rights
Despite the very questionable decision of the International Criminal Court to close the preliminary examination of the Colombian State before even moving on to the investigation phase and, on the contrary, to open an investigation against the Venezuelan State, in Colombia there are reasons to affirm that the violation of human rights is State policy.

The genocide committed in Colombia against social leaders, human rights defenders, signatories of the most recent peace agreement, educators, trade unionists, among others, implies ethnocide and also a class-based juvenicide.

Between January 1 and December 2, 2021 alone, 162 social leaders and 44 former signatories of the agreement have been victims of this genocide, and 90 massacres have been committed. To this must be added the terrible images that circulated around the world of the brutal police and para-police repression during the National Strike earlier this year in Colombia.

In Venezuela, on the other hand, where occasionally there have been cases of human rights violations, there is no record of any massacre this year. In fact, in social media, only one alleged massacre was reported at the beginning of the year, which even the international media reported within quotation marks since it took place in the context of a police operation that broke up a criminal gang and in which there are many elements to believe that these were deaths during a confrontation. There is also no record of any assassination of social leaders. It is worth clarifying that in the few occasions in which these murders have occurred, the victims are generally sympathizers of the Bolivarian Revolution.

What is certain is that the occasional incidents of human rights violations by state security forces—which are not justifiable just because they are few in number—and the fact that a large part of them are investigated by the Venezuelan Attorney General’s Office, contribute to the affirmation that the defense of human rights is a policy of the Venezuelan state.

8. Human Development Index
This index, defined as an instrument that measures the average progress of a country in terms of basic human capacity represented by life expectancy, educational level and per capita income, is measured by the United Nations Development Program (UNDP), which presents each year a ranking of 189 countries, the first being the country with the highest index and the last with the lowest.

In recent years Venezuela has always been above Colombia in this index, although it is worth noting that Cuba has been above both in the same period. Only after the blockade of Venezuela in 2015 did it begin to fall in that ranking and, despite the harsh economic and social situation it faces today, it was only placed below Colombia in the last two reports of 2019 and 2020. The reason for this fall, as explained by the UNDP itself, is mainly due to the fall in per capita income.

9. Voting system
This point of comparison we have discussed on several occasions and we will illustrate it again with a table first published in 2018, given that neither of the two systems has undergone modifications since then. 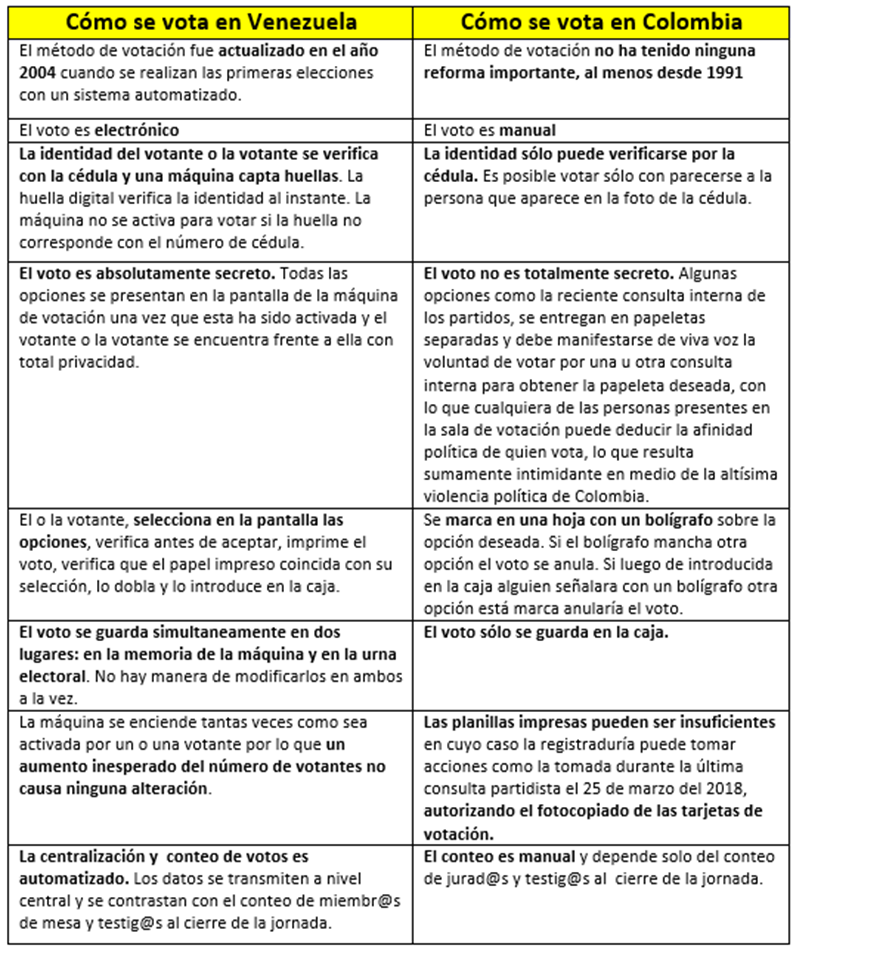 This comparison is made based on my experience that my dual nationality has allowed me to vote in elections of both countries and to participate as a table member and electoral witness in the elections of the two countries.

These are some of the elements with which we propose to deepen the debate on the true meaning of democracy and raise two complementary questions to the title of this article: What is democracy in the 21st century? Where is there a true democracy?

Featured image: Venezuela and Colombia—which country is a democracy, and which one is a dictatorship? Photo: Carlos García Rawlins / Reuters