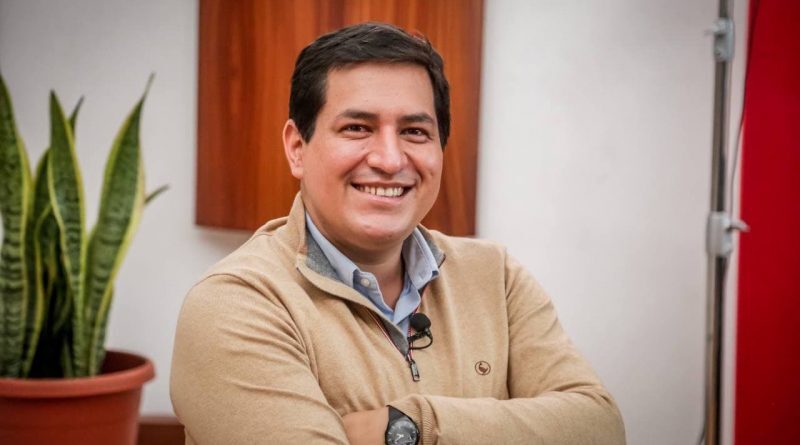 We spoke to Andrés Arauz, former Presidential candidate in Ecuador for the Revolución Ciudadana (Citizens’ Revolution). Andrés won the first round, with an advantage of more than 10 points over second place candidate, the neoliberal banker Guillermo Lasso. However, many liberal voters who backed third place Yaku Perez in the first round, cast a null vote or swung for Lasso in the second round, granting victory to the right.

Andrés is also an expert economist. At just 20 years old, he began working at the Central Bank and would go on to take senior roles in Rafael Correa’s economic management team. We discuss Latin America’s fragile economic recovery and the situation in his country under the new government of Guillermo Lasso.

How do you see the different approaches to economic reactivation in Latin America? Some like Bolivia are opting for public investment, while others are sticking old neoliberal recipes.
Public investment is the key to kick-starting our economies in the region, however, some countries are sadly taking advantage of the crisis caused by the pandemic to deepen neoliberal policies; cutting taxes for the rich, slashing public services, privatization, mass layoffs in the public sector, and more.

Another aspect of this moment is that we’re seeing Central Banks taking a new leading role, in most countries for the past year, Central Banks have been injecting cash into the economy, even in Brazil where the national government doesn’t believe in public investment. the Central Bank provided the state with crucial funds to keep public infrastructure and services afloat. Nevertheless, there are new risks being presented for developing countries because the US is discussing the possibility of raising interest rates and that would really put the breaks on economic growth for our countries in the south, so we have to prepare defensive measures against those who want to turn this nascent recovery into a conflict.

Here in the Trópico, we remember you from when you came with Evo for his big welcome home rally in Chimoré! What is the importance of Bolivia for movements in Ecuador? Is Bolivia’s economic model studied in other countries?
Yes! I have great memories of last November when Evo returned home, we had a wonderful day there and we had really important discussions with him. We talked about Latin American unity, but also about unity between social movements. Sadly, in my country, there is still a split between the progressive forces and the indigenous movement, and I think in Ecuador Evo can really help us to reconcile and unite under a common force and take back control of the country so as to return hope and opportunities to the people.

On the economy, we’ve always sought to apply many of the measures that exist in Bolivia; Public and social investment as the motor of the economy, nationalization of strategic industries, the creation of new state companies that can propel development, a long-term vision for use of natural resources like lithium. This economic model that Bolivia has built is studied in universities throughout Latin America and beyond because of its evident success, despite the interruption and crisis that it faced temporarily under the coup. The coup installed the classic right-wing model in the region which consists of; Destroying public investment and state industry as economic actors, generating poverty and unemployment, maintain power through clientelistic relationships of corruption with the leading sections of the oligarchy.

In Ecuador, President Guillermo Lasso has enjoyed the support of a fawning press both domestically and internationally. What’s the truth behind all the puff pieces that present his government as a roaring success?
Well, anyone who comes in after Lenin Moreno would compare favorably, his government brought ruin economically, politically, corruption exploded, the very social fabric of society collapsed. Guillermo Lasso meanwhile has made some intelligent moves compared to Moreno. During the campaign, Lasso said that he’d only work with the United States and depend only on them for vaccines, but in government, he’s been more pragmatic and has pursued relations with Russia, China, Mexico, and Argentina, so as to secure vaccines for the population. Now, 65% of Ecuador’s vaccines have come from China! Despite the fact that he used to attack China. Thanks to public investment and Chinese backing, the vaccination campaign has been going well and that has improved many people’s impression of him.

The worst aspect of Guillermo Lasso’s short period in the presidency has been the return of Ecuador to the International Center for Settlement of Investment Disputes (ICSID), this is essentially the high court of the World Bank. This institution allows transnational corporations to sue national governments and always leads to states being forced to privatize public industries and hand over control of key industries such as mining, water, electricity, telecommunications, highways, etc. Embracing the ICSID is an extremely worrying sign for the future.

What are some proposals from your campaign that could’ve helped to really rebuild the economy after the collapse under Lenin Moreno?
One proposal of ours was cash transfers to the population who’d been affected by the pandemic restrictions. The purpose of this was to kick-start internal demand at a popular level because it’s from that base that the whole economy can start standing again. We would’ve rehired all the health workers that lost their jobs during the pandemic due to Lenin Moreno’s austerity measures. We proposed a project of $180 million to install internet points in every remote area of the country and thereby turn connectivity into a human right.

Natural resources are also important, our plan was to roll out a national project to make electric cars, taking advantage of the hydroelectric resources in Ecuador. We want to make that transition to electric transport with Bolivian lithium batteries! When I visited Bolivia I saw the lithium processing plants and the huge potential they have, we need a joint state company to produce these cars and batteries.

RELATED CONTENT: Neoliberal Model Takes Hold in Ecuador at the Hands of Lasso

This is our vision for an ecological, democratic, popular, transition towards an economic model that can give opportunities to people. Latin America has a long way to go, I think improving public education in science and technology is key for this. We want to see UNASUR launch an Erasmus-style scheme so that students can spend time in other South American countries and share experiences, we’d want to see 1 million scholarships for this so working-class Latin Americans can access it. These are real tangible solutions to rebuild the economy and to unite our peoples, regional integration can’t only be at a state level, it should also be at an organic level. We are very optimistic that in 2022, there will be big changes in Latin America that will allow these dreams to become reality.

What are the prospects for the Ecuadorian left after suffering years of brutal persecution by Lenin Moreno against the opposition?
Throughout the last four years, there was has been a high-powered smear campaign against Rafael Correa and the Citizens’ Revolution, the campaign has been led by every single section of Ecuador’s media, it’s bombarded the population all day every day and so of course it’s affected us. Another weakness we have is the demographic changes in Ecuador. Almost 40% of the electorate now is less than 35 years old, which means that they never knew the old Ecuador before the Citizens’ Revolution. Finally, the main problem we have is the lack of unity and reconciliation between the progressive movement and the indigenous movement. Unity between those two forces has been the historic factor that secures victory for the people’s movement for national liberation.

These are our challenges. With the weight that Bolivia has as a leader in the region in this regard, I hope Bolivia can help us achieve that unity that will allow us to seize back the future.