Venezuelan Paralympic athletes being received as heroes. Lisbeli Vera the top medalist in front of the mic. Photo courtesy of Conviasa.

This Thursday, September 9, the delegation that represented Venezuela at the 2020 Paralympic Games held in Tokyo landed in the country and was welcomed by its people as heroes.

With a red carpet prepared for them by the Venezuelan government, several Olympic athletes and medalists were waiting also, along with friends and relatives, to welcome the Paralympic delegation. Olympic athletes including karate master Antonio Diaz and BMX biker and Olympic silver medalist Daniel Dhers were in attendance.

Parathletes Lisbeli Vera and Linda Pérez led the Venezuelan Paralympic delegation that arrived in Maiquetía, in La Guaira state, in the company of sports authorities such as Minister Mervin Maldonado, who has been supporting the delegation from Tokyo.

Upon her arrival, the double gold and silver winner in athletics, Lisbeli Vera, stated that she felt happy and proud to return to her country. “I have no words to express how happy I feel,” she said, “and now I tell you that I honored Venezuela, I honored my flag, and all my people from San José (Merida state) who have been supporting me. I am very happy, super proud!”

For her part, Clara Fuentes (bronze medalist in paralympic powerlifting at Tokyo) said she felt very proud also, and emphasized the beauty of Tokyo, the culture and the people. She sent a message to people with disabilities: “everything is possible for a willing mind.”

Escorted by fighter jets while entering Venezuelan airspace
President Nicolas Maduro and the Minister for Defense, Vladimir Padrino, also welcomed the delegation with posts on their respective social media accounts. They noted that the Conviasa flight that brought the athletes from Japan was escorted by Venezuela’s Russian-made Sukhoi Su-30MK2 fighter jets. 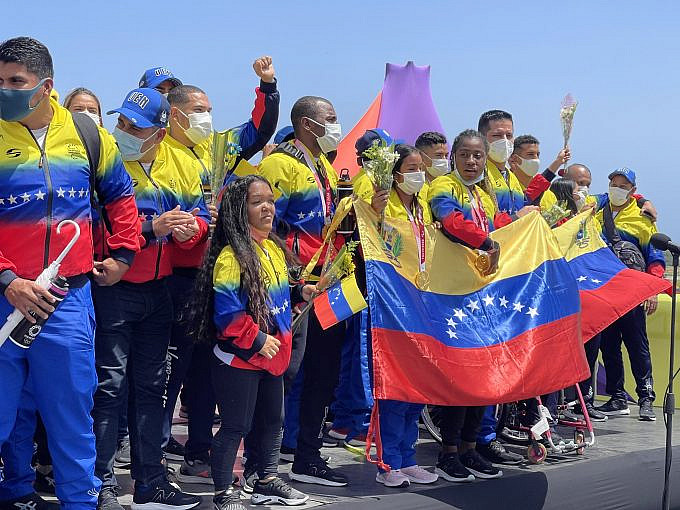 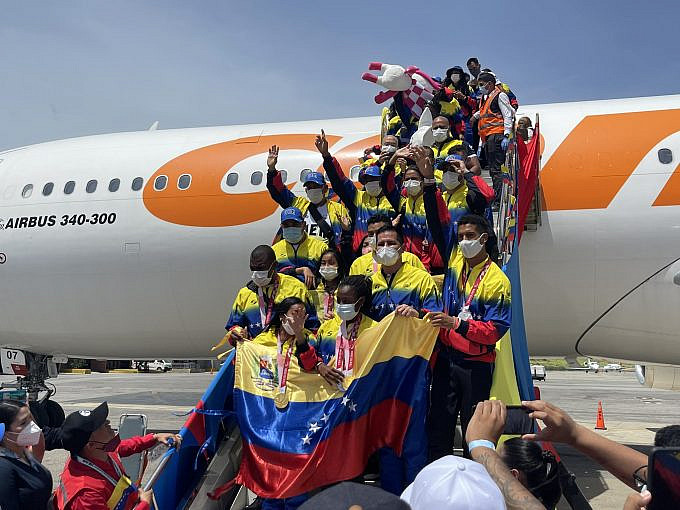 Meeting President Maduro
Immediately after arriving to Caracas the bus that brought the delegation was received by President Nicolas Maduro at Miraflores Palace.

The head of state delivered the Francisco de Miranda Order to the athletes, in its 2nd Class, “Precursor,” and in its 3rd Class, “Official,” to the athletes who participated in the historic Tokyo 2020 Paralympic Games.

“A flag full of victories, of success,” said Maduro upon receiving the national tricolor from the hands of the Paralympic athletes. “I receive it with great pride from the hands of Lisbeli, Vera, and Abraham Ortega.” Venezuela has now achieved a total of 24 medals in the Paralympic Games, noted Maduro, of which 23 have been obtained during the Revolution, including 13 medals in the last eight years.

President Maduro also reported that the national games will be resumed in December 2021, and the paranational games in March 2022. He also called on communities and students to promote athletics in their respective communities.

Featured image: Venezuelan Paralympic athletes being received as heroes. Lisbeli Vera, the top medalist, is in front of the mic. Photo courtesy of Conviasa.