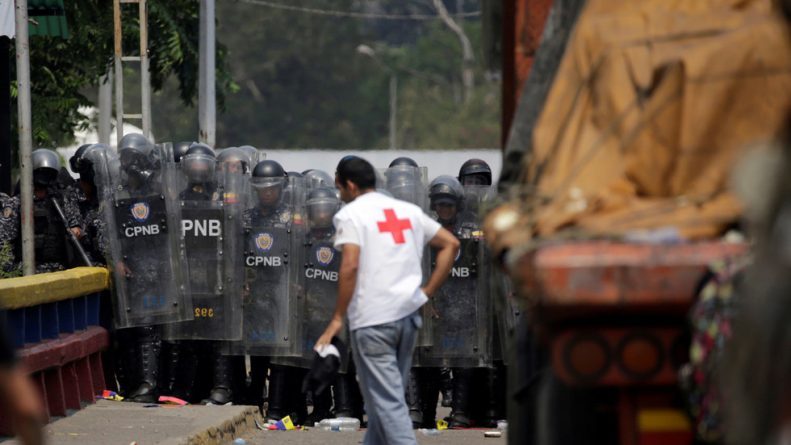 The largest international aid organization has demanded that activists at the Venezuela-Colombia border not use the insignia of the Red Cross, which isn’t participating in what Caracas has dismissed as a US “propaganda show.”
The Red Cross learned that some “people not affiliated” with the agency are trying to disguise themselves as aid workers to smuggle cargo for Venezuela’s opposition across the closed frontiers.

“They might mean well but they risk jeopardizing our neutrality, impartiality & independence,” the International Federation of Red Cross and Red Crescent Societies said.

We’ve learned that there are some people not affiliated w/ @cruzrojacol & @CruzRojaVe wearing Red Cross emblems at Colombia-#Venezuela & Brazil-Ven border.
We urge them to stop doing this. They might mean well but they risk jeopardizing our neutrality, impartiality & independence

Earlier, Venezuelan Foreign Minister Jorge Arreaza stressed that the UN and the International Red Cross are not participating in the “propaganda show” staged by the United States. “It is clearly an action with political objectives, it could never be described as a humanitarian action,” he said on Twitter, accusing the governments involved in the US plot of violating the principles of the UN charter.

The government of Nicolas Maduro has sealed off the borders with neighboring Colombia, Brazil and the Dutch island of Curacao, trying to prevent US shipments from entering the Latin American State. Caracas denounced the ‘aid’ as a highly-publicized attempt to foster division and chaos, and possibly to use it as a cover to smuggle arms to the country’s opposition.