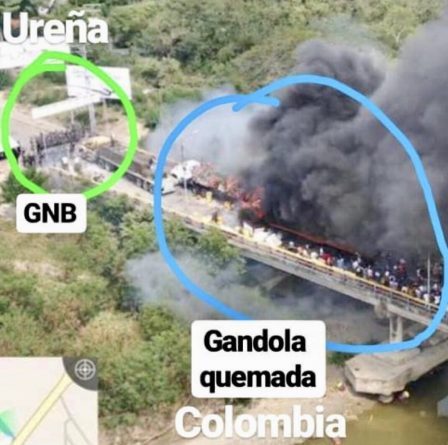 Today President Nicolas Maduro decided a complete brake of political and diplomatic ties with Colombia, that’s a result of the most outregoust act of disrespect of Venezuelan soberaignity and international law in the whole history between Venezuela and Colombia.

The day started with a staged operation in the Simon Bolivar bridge where three very well synced military defectors ran their armored vehicles over a crowd and thankfully were not able to kill anyone. They were also unaware about the cameras of Telesur that filmed the whole false positive.

The second false positive of the day was in the border bridge of Ureña where two trucks were burned under unclear circunstances trying to force the so called “humanitarian aid” into Venezuela which is an act of war allowed by Colombian authorities.

The circumstances of the burned trucks are not completely clear but at this time of the day some videos and photos have shown Colombian paramilitary agitators next to the trucks with containers of gasoline, truck drivers with red cross shirts that forced the Red Cross to clarify that they were not involved in that operation, and aerial video footage during that part of the day.

Even though the cause of the fire might be multiple: molotov cocktails from terrorist activists in the Colombian side or a tear gas can launched from the Venezuelan National Guard to protect themselves from the agression coming from Colombia, the photo below is more that clarifying in terms of what happened and WHERE.

We are sure that new videos and photos will come out in the next hours and we are planning to update this post in that sense. Meanwhile, it is important to show a series of tweets from Telesur’s Madeleine Garcia on this controversial situation. Later during the night the PSUV leader, Freddy Bernal, updated the Venezuelan people with a report broadcasted on national television about multiple skirmish allover the border control points with Colombia that were heroicly repeld by Venezuelan law enforcement officers with 42 people wounded, 3 of them with shout guns and two burned alive. In parallel, during the whole day the Colombian goverment made a show to present the defection parade of some military and police Venezuelan officials that didn’t reach the couple of dozens and was the best they could do after a week of threats, pressure and being bought from all levels: starting at the top with the White House to the lower level being the Casa de Narino.

On Sunday afternoon the Minister for Communication and Information of Venezuela, Jorge Rodriguez presented evidence of molotov cocktails being throw by paramilitary criminals from the Colombian side of the border, reaching the trucks. This can be seen in the tweet below: