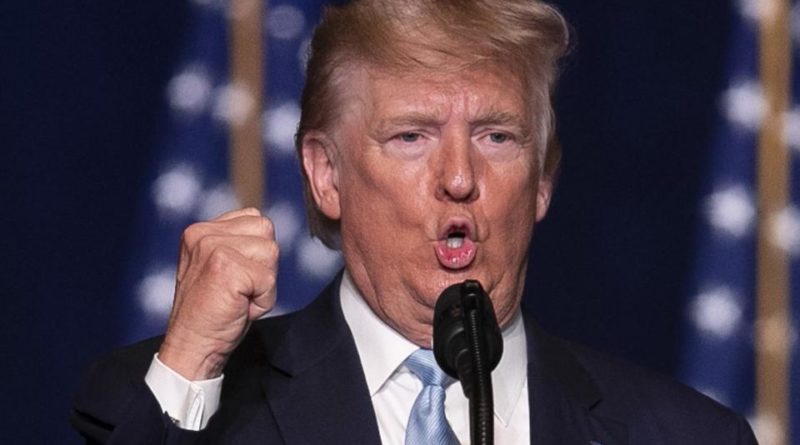 Wars often reverse the declining popularity of presidents. A new war appears on the horizon caused by Washington, which invokes the usual pretexts.

One of the first lessons they teach in every course about the political system in the United States is that wars often reverse the declining popularity of presidents. With a Donald Trump approval rate (photo) of 45 percent in December 2019 and the “twin deficits” (commercial and fiscal) growing out of control, like the public debt and a threat of impeachment against the White House, advisers have probably recommended that the president appeal to the traditional resource and start a war (or a high-impact military operation) to rebuild his popularity and place it in a better position to face the November elections.

This would be a plausible hypothesis to explain the immoral and bloody attack that ended the life of Qassem Soleimani, certainly the most important Iranian commander. Washington officially reported that the operation was explicitly ordered by Trump, with the cowardice that is traditional among White House tenants, fans of dropping bombs thousands of miles away from Pennsylvania Avenue and annihilating enemies or suspected terrorists from drones driven by some morally and psychologically deranged youth from some cave in Nevada. That same press was in charge of presenting the victim as a heartless terrorist who deserved to die that way.

RELATED CONTENT: US: Thousands Take to Streets in More Than 70 Cities Across US to Protest Trump’s “Reckless Acts of War” Against Iran (+UK)

With this criminal attitude the situation in the Middle East gets extraordinarily tense, to the satisfaction of the neo-Nazi regime that governs Israel, the barbaric monarchies of the Persian Gulf and the scattered gangsters of the defeated – thanks to Russia – Islamic State. The perverse calculation is that in the next few days the popularity of the New York tycoon will begin to rise once the United States propaganda machinery is put in motion to blunt, for the umpteenth time, the population’s “consciousness”. As we said above, this appeal to war was routinely used in the history of that country. As last year noted by former President James Carter, the United States was at war for 222 years of its 243 years of independent life. This is no coincidence, but it is due to the disastrous belief, deeply rooted after centuries of brainwashing, that the United States is the nation that God has placed on earth to carry the flags of freedom, justice, democracy and human rights to the most remote corners of the planet. It is not a question of making a timely accounting of the wars started to help (US) presidents in distress, but it is appropriate to bring up a recent case that also involves Iraq and whose outcome was different than expected.

Indeed, in 1990 President George HW Bush (Bush Sr.) was in trouble in the face of his re-election. The “Just Cause” operation, a sweet name to designate the criminal invasion of Panama in December 1989, did not have the desired effect since it did not have the volume, complexity and duration necessary to exert a decisive impact on public opinion.

Later, the Washington Post ran on its front page (16-X-1990) that the president’s popularity collapsed and commented that “some Republicans fear that the president feels forced to initiate hostilities to stop the erosion of his popularity.” Predictably, the Democrats triumphed in the midterm elections of November 1990. Bush got the message and opted for the old appeal: he doubled the US military presence in the Persian Gulf but without declaring war. Shortly after the statement of one of Bush’s top advisors, John Sununu, leaked, saying, in words that fit as a ring to a finger to understand today’s situation, that “a short and successful war would be, politically speaking, gold mine for the president and would guarantee his re-election.”

The invasion of Iraq to Kuwait offered Bush the elder that tray: go to war to “free” little Kuwait from the yoke of his arrogant neighbor. In mid-January 1991, the White House launched the “Desert Storm” operation – which, unfortunately, Argentina’s government of Carlos S. Menem supported – against Iraq, a country already devastated by economic sanctions and its long war with Iran, and against a ruler, Saddam Hussein, previously demonized unspeakably by the lying world media oligarchy with the unforgivable complacency of the “Western democracies.” But, contrary to what was expected by his advisors, Bush Sr. was defeated by Bill Clinton in the November 1992 elections. And Clinton did so with four words: “It’s the economy, stupid!” Who could assure that a similar outcome could not be repeated this time?

This, of course, said without the slightest hope that an eventual Democratic successor of the New York satrap may be more favorable, or less dire, for the future of humanity. However, what we are sure of is that the “international order” built by the United States and its European partners exhibits an advanced state of rot. Otherwise the complicit silence or the hypocritical condemnation, when not the open celebration, of the White House allies and the “free press” in the face of a crime perpetrated against a high military chief – not of an alleged incognito “terrorist” – from a member country of the United Nations ordered by the president of the United States and in open violation of international legality and, even, of the Constitution and laws of the United States. A new war appears on the horizon caused by Washington, which invokes the usual excuses to cover up its insatiable imperial ambitions. The “military-industrial complex” celebrates with champagne while the world shudders at the tragedy ahead.