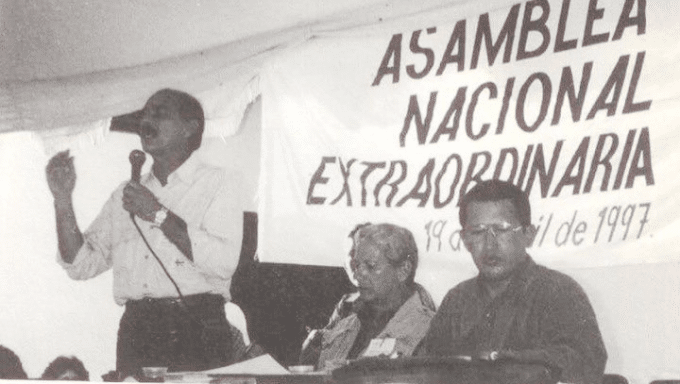 On Friday, October 1, Venezuelan President Nicolás Maduro, reported of the death of well-known revolutionary leader William Izarra. In his Twitter account, the president wrote: “My deepest regret for the parting of William Izarra, a great and loyal comrade in the revolutionary struggle, friend of our Commander Hugo Chávez. I send my heartfelt condolences to his family, friends and dear ones. Hasta la Victoria Siempre William!”

The Minister for Foreign Affairs, Félix Plasencia, also expressed his condolences. “We regret the sad passing of Commander William Izarra, Ambassador of Venezuela to the Democratic People’s Republic of Korea [North Korea] and former Deputy Minister of Foreign Affairs for Asia. A full-fledged human being, a patriot and a committed militant. Our condolences to his family and friends,” wrote Plasencia on his Twitter account.

The Minister for Culture, journalist Ernesto Villegas, expressed his grief for Izarra’s death. “He has left a mark, and his work continues to burn like a beacon in the complexities of time. My condolences to his wife Yurani, his son Andrés and other family members. Honor and glory!”

Although the cause of death was not disclosed nor was it specified if he was in Venezuela or in North Korea, journalist Jessica Sosa reported that Izarra was ill with COVID-19. “I came to know a few days ago about William Izarra’s COVID. However, in his WhatsApp status he kept calling upon everyone to study Bolivarian socialism. How painful that he has left, though he fought to the end. How sad.”

Izarra was appointed by the National Assembly on May 27 as Venezuela’s ambassador to North Korea. For many years after quitting his post as Deputy Minister of Foreign Affairs, he had dedicated his life to the development of PSUV cadre base.

William Izarra was born in Maracay on May 7, 1974. He was a military man who graduated from the Military Academy of Venezuela, and also received a degree in Education from the Central University of Venezuela (UCV), a Masters degree on Planing from Harvard University, and a PhD on Development Sciences at CENDES. He was a professor in postgraduate programs at various educational institutions both in Venezuela and in other countries.

The 74-year-old revolutionary leader was a founding member and first national director of the Fifth Republic Movement (MVR). He joined the Revolutionary Patriotic Front after the events of February 27, 1989.

Izarra was also the founder of the Ideological Training Center (CFI), and promoted the formation of the Bolivarian Socialism Research Institute (IISB).

He also served as a professor at the Air Force College; professor of undergraduate and graduate university education; deputy minister of Foreign Affairs for Asia, the Middle East and Oceania; director of ideology of the Maisanta Nacional Command; senator of the former National Congress, among other responsibilities.

After news of Izarra’s passing spread, social media was filled with messages of regret and condolences, with many commending his work as a defender of the Bolivarian Revolution, for being on the frontlines, consistent with Chavista principles and always connected to the common people of the country.

Featured image: William Izarra speaking at a political event, with Hugo Chávez on stage, in April 1997, a few months before Chávez was elected for the first time as president of Venezuela. File photo from Alba Ciudad.