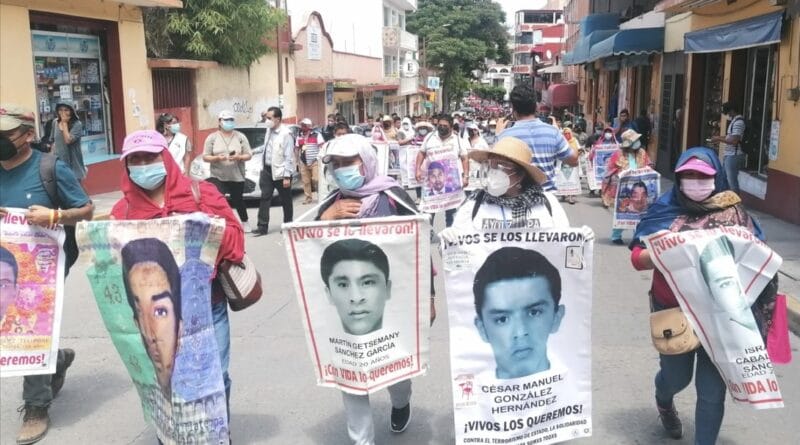 Almost seven years after the forced disappearance of 43 students of the Rural Teachers’ College in the town of Ayotzinapa, Mexico, the struggle for truth and justice continues as the investigation proceeds slowly

On September 21, five days before the seventh anniversary of the forced disappearance of 43 students of the Rural Teachers’ College in the town of Ayotzinapa, Mexico, the federal authorities revealed new evidence in the case, which contradicted the official version of the truth presented by the previous government.

At a press conference, the special prosecutor for the case, Omar Gómez Trejo, and the Undersecretary for Human Rights, Alejandro Encinas Rodríguez, reported that the search for evidence in the La Carnicería ravine located in Cocula town, in the state of Guerrero, had concluded. They reported that in the past two years of investigation in the ravine, located 800 meters from the Cocula garbage dump, around 200 human skeletal remains were discovered in an area of 8,000 square meters. They reported that the DNA samples from skeletons, whose results were recently known, matched Jhosivani Guerrero de la Cruz and Christian Alfonso Rodríguez Telumbre, two of the 43 students who disappeared on the night of September 26, 2014.

This new revelation refuted the “historic truth” of the case narrated by the then-government of far-right president Enrique Peña Nieto. Nieto’s administration claimed that some corrupt policemen attacked and arrested the students in Iguala city, Guerrero, for local interests, they then handed the students over to a group of drug-trafficking assassins, the Guerreros Unidos Cartel, who then supposedly killed them, incinerated their bodies in a landfill in the mountains and disposed of theirs remains in the nearby San Juan River.

Prosecutor Gómez and Undersecretary Encinas told the media that the authorities were able to get to the place and begin the search with the help and collaboration of different witnesses, and the confession of one of the participants of the crime. They informed that during the investigation, they found that there were several controlled fire points in the area where cremation was carried out. They reported that in the coming days, the investigation would expand to other municipalities and all the facilities where controlled cremations could have been carried out would be inspected. They also said that the Attorney General’s Office would open an investigation against the experts who previously investigated the case and manipulated the evidence.

The officials pointed out that the area in which they had worked since November 2019 is not the same that was reported as being investigated during the administrations of former attorney generals Jesús Murillo Karam and Arely Gómez González. This was confirmed by the members of the Commission for Truth and Access to Justice for the Ayotzinapa case, the Special Unit for Investigation and Litigation and the Interdisciplinary Group of Independent Experts (GIEI), who joined Gómez and Encinas on a tour of the La Carnicería ravine on Tuesday, A member of the GIEI, Ángela Buitrago, recalled that the report they received during the previous investigation does not coincide with the place where the remains of the students were found.

The special prosecutor emphasized that these findings open a new line of investigation. “The place where we are is vindicating a lie that was told at the time. We have been investigating for two years, and the fact of finding a different place for something that had supposedly been done in Cocula landfill and in the San Juan River opens up a completely different great line of investigation,” said the prosecutor.

Gómez added that due to the irregularities committed in the investigation in 2014, one of the main lines of investigation that remains open is that the first evidence, the bag that supposedly contained the remains of the students, found in the San Juan River could have been planted by the officials of the previous authorities.

Meanwhile, the undersecretary stressed that “it is not conclusive information in any way, it is a part of the investigation that is being developed and the searches will continue.”

The parents and family members of the victims and human rights organizations, who never believed the narrative of Nieto’s government and alleged that the federal government and the security forces were directly involved in disappearing the students, held a peaceful march in Chilpancingo city on Tuesday, demanding truth behind the cover-up and justice for their loved ones. On Wednesday, they demonstrated in front of the Attorney General’s Office, demanding the arrest of government officials and police officers allegedly involved in the massacre. They announced that they would continue to mobilize in different cities until September 26 and end their protest actions with a massive march in the capital Mexico City.

Seven years have passed since the mass disappearance of the students from the Rural Teachers’ College, three years have passed since the establishment of the truth commission by the ruling government of president Andrés Manuel López Obrador, but little progress has been made towards the road to justice due to the tampering of evidence and manipulation of truth by former authorities.

Students and human rights organizations, who alleged that the students from Rural Teachers’ College, known for its left-wing activism, were selectively targeted for opposing a neoliberal education bill proposed by Nieto’s government in 2013, have also called on the government to expedite the investigations.