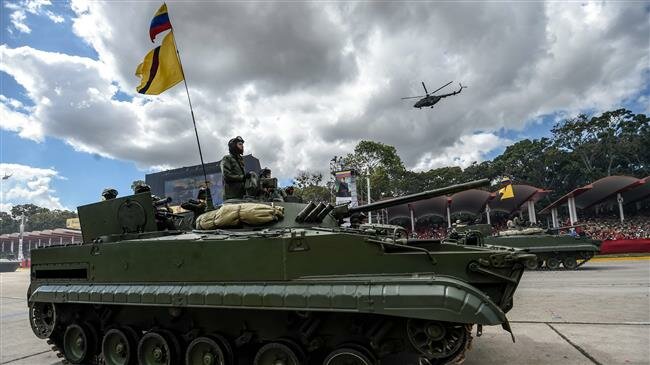 Russia says its troops and military experts in Venezuela are helping the Latin American state prepare itself and maintain its combat readiness in the face of the US’ “threat of the use of force”.

“The Venezuelan government has been in a state of anxious anticipation since the US has repeatedly threatened to use force against the country,” Russian ambassador to Caracas Vladimir Zaemsky told AFP in an interview in Moscow.

He said “in these conditions they need to be sure that the weapons they have are in a functioning state.”

According to Zaemsky, Russian military experts are there to train the Venezuelans “in maintaining combat readiness of their equipment and teach them how best to use it.”

The Russian envoy said the troops are legally allowed to be there under an agreement signed between the two countries in 2001.

US President Donald Trump says “Russia has to get out” of Venezuela and warned that “all options” were on the table to force Russia out of the region. Russia has dismissed the US threats, defending its move in dispatching military “specialists” to Venezuela.

In recent months, tensions have increased between Caracas and Washington with the US imposing sanctions on Venezuelan President Nicolas Maduro as well as his government.

RELATED CONTENT: The Central Bank of Russia Sends its US Assets to China

In January, the US took the lead in recognizing opposition leader Juan Guaido as Venezuela’s president after the head of the opposition-ruled Congress named himself the country’s interim chief executive.

The US has several times threatened to take military action to oust Maduro’s government since the deepening of the politico- economic crisis in the country last year.

A small number of renegade soldiers led by Guaido staged an attempted coup d’état against Maduro’s government last month. But the bid quickly failed, and many of the putschists have taken shelter at foreign embassies in Caracas. Others have been arrested or gone into hiding.

In his interview with AFP, the Russian ambassador said despite the country’s military presence in Venezuela, Moscow believes in a peaceful way of resolving the crisis, through “dialogue and the search for compromise”.

He said Moscow welcomed mediation efforts undertaken by Norway, where both the Maduro government and the opposition sent delegations.

“It is very good that these talks are taking place,” Zaemsky said.

But he blamed US-backed Guaido and an opposition “influenced by radicals” for stalling the dialogue in Venezuela.

Back on May 17, President Maduro declared the beginning of negotiations with the US-backed opposition in the Norwegian capital, Oslo, in an effort to resolve the political stalemate.

The talks have begun nicely to move toward agreements of peace, agreement and harmony, and I ask for the support of all Venezuelan people to advance on the path of peace,” Maduro said while addressing some 6,500 troops.

Norway, which referred to the talks as “exploratory discussions,” started the mediation to bring to an end a months-long crisis.