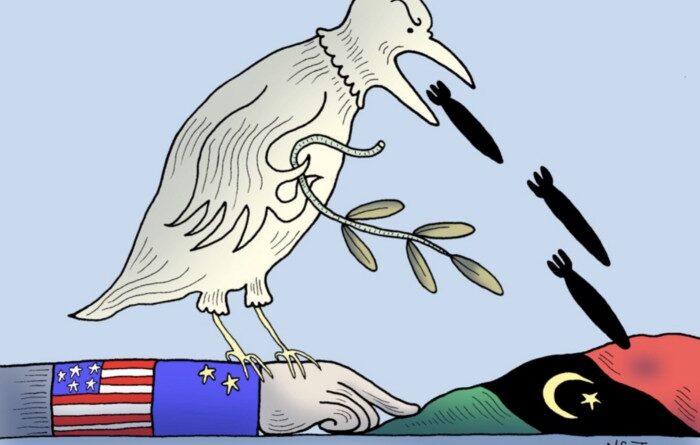 It’s notable how pretty much the only cinematic exposure that Americans have gotten to Libya and the DPRK during the last decade has been in the form of two comedies which are designed to paint an utterly cartoonish and extremely biased picture of the nations they’re referencing: Sacha Baron Cohen’s 2012 film The Dictator and the 2014 Seth Rogen/James Franco film The Interview. Both serve to give Americans a sense of thorough detachment from the geopolitical realities surrounding these two countries, and to therefore make the propaganda the U.S. empire produces about them feel unquestionable in the minds of the public.

The Dictator has Cohen playing a goofy, bearded, brutal despot who rules over a fictional country in northern Africa, and decides in the end to hold elections that are rigged in his favor. The Interview has two American reporters who are recruited by the CIA to infiltrate north Korea and assassinate Kim Jong Un under the pretense of holding an interview. The over-the-top ridiculousness of the ways Gaddafi and Kim are poked fun at in these films (Cohen’s Gaddafi caricature is dead set on attacking Israel with nuclear weapons, and in The Interview Kim Jong Un deceives the naive infiltrators by putting fake fruit in a supposedly well-stocked grocery store) come with the core implication of political satire: that the mocking is being directed at a reality which is so undeniably serious that laughing is our only recourse.

But like 2004’s animated comedy Team America: World Police, where the protagonists fight against a portrayal of Kim Jong Il who feeds WMD investigators to sharks, the humor comes from the falsehoods and deep ignorance that the filmmakers presume the audience to share with them. In both Team America and Interview, the deeply democratic socialist society that the DPRK has built following America’s genocidal war against the country is reduced to a racist caricature of a third world dictatorship. In Dictator, the Pan-Africanism that Gaddafi based his governing model upon and the great material prosperity within Libya that resulted from this was portrayed through the same kind of shallow propaganda.

RELATED CONTENT: US Role in Assassination of Iranian Scientist

And the wildly misleading messages of these films were accepted without any criticism by American reviewers like David Edelstein, who wrote about The Interview with total seriousness: “It would be hilarious if it weren’t so tragic — and in The Interview it’s hilarious and tragic. This is an insane country.” In the same paragraph, Edelstein ranted about the DPRK’s internal propaganda, not seeing the irony in the fact that The Interview was itself produced under the guidance of the CIA and the State Department as part of a campaign to get the public on board with an imperialist-led coup within the DPRK.

Why has my mind suddenly come back to these films? Because as Sacha Baron Cohen has made another big mark upon American popular culture during these last few months with his Borat sequel, the horrific imperialist machinations that he and other filmmakers in his vein have helped legitimize have continued to be absent from any mainstream discourse. Which I find sadly ironic, because while Borat Subsequent Movie Film is largely about Cohen goading Americans into agreeing with shockingly racist statements to show how benign bigotry is in America, our imperialist cultural hegemony has rendered benign the reprehensible foreign policy actions Cohen has helped manufacture consent for.

The year before The Dictator was released, the U.S. and France invaded Libya, had Gaddafi be captured and brutally executed by terrorists, and turned what had been Africa’s wealthiest democracy into a failed state which is now overrun by slave trading and civil war. The Obama administration marketed this half-baked regime change war by fabricatingsome atrocity stories which were pinned on Gaddafi, and then Libya left the American public eye apart from Cohen’s “satire” about it. The only thoughts that Cohen left the public with in regards to Libya were a vague “oh, I guess it’s good that the real life version of this guy was taken out,” only a milder version of Hillary Clinton’s “We came, we saw, he died” comment regarding Gaddafi’s murder.

One of the only times The Dictator has been brought up throughout this year’s discussions about Cohen is in the recent Borat analysis from the popular reviewer Lindsay Ellis, who’s said that Cohen “doesn’t really take authoritarianism seriously” in reference to his statement that “I had always found Colonel Gaddafi hilarious.” These are the kinds of vapid assessments that Americans now tend to make about the nation that Washington tore to shreds nine years ago.

RELATED CONTENT: Libya: Before and After Muammar Gaddafi. Dramatic Collapse in the Standard of Living

I get the sense that The Interview ended with Kim Jong Un getting blown up by a rocket, whereas The Dictator allowed its Gaddafi character to live, because the CIA is furious that the U.S. still hasn’t been able to do to the DPRK what it did to Libya. Since the DPRK outmaneuvered Washington and permanently attained nuclear weapons, regime change within the country has objectively been out of reach, with the pro-imperialist intelligentsia only being able to engage in far-fetched fantasies about the country eventually collapsing due to its own supposed ineptitude. So the centers of imperial propaganda continue to demonize Kim Jong Un, waiting for some opening for conquering the upper half of the Korean Peninsula that in all likelihood will never come.

Similar situations have emerged surrounding Venezuela and Syria, whose anti-imperialist leaders still haven’t been ousted after many years of regime change attempts. Maduro and Assad will also still be reliably vilified; it’s probable that the Biden administration will try to pin more chemical attacks on Assad, and that Maduro will again be falsely accused of electoral fraud as part of a renewed coup effort. And the Venezuelan and Syrian people will still be attacked with deadly sanctions. In the case of the DPRK, it looks like these sanctions are set to tighten even more, since Biden’s team plans to break off recently established diplomatic ties with Kim Jong Un while stepping up the economic embargo that deprives the DPRK’s people of many essential resources.

Throughout this return to the smarter imperialism of the Obama era, we’ll probably continue to see U.S. comedians putting out material that “satirizes” these leaders who the U.S. still has yet to murder. Maybe sometime in the next few years, Cohen will make himself up to look like Assad and do “gas ‘em up” jokes, which will earn him critical acclaim for his “dark humor.” All the while, the engines of Biden’s economic warfare will keep turning, and harming the people who the empire supposedly wants to help.