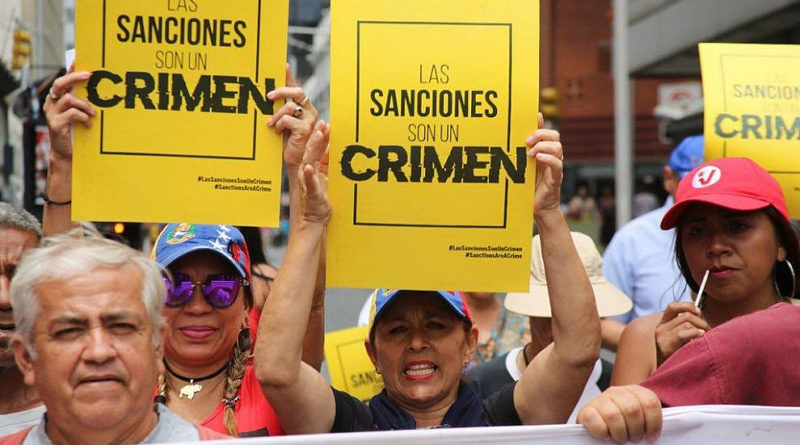 In discussing the issue of “sanctions” there are two main points that need to be made. One is the use of the correct terminology when referring to the government actions that the US, Canada and the EU take in order to achieve regime change. The second is of course the impact that those actions have.

The blame of imposing “sanctions” falls fully on the US government as it currently applies them to 39 countries! However, throughout, when I refer to the US “sanctions”, particularly in the Venezuelan context, I also mean to include Canada as well as the EU as willing accomplices and accountable perpetrators.

First of all I would like to correct the terminology that is used. We often are co-opted into the use of the language of the empire but we have to be alerted to the fact that empires write history based on their “vision” of the world as conquerors.

When the empire and the colonial powers to which we have referred above put words in our mouths, they also aim to put thoughts in our minds. This will certainly mislead our perception of the facts.

For example, it is almost inevitable to see references to Cuba in the corporate media as “communist-run Cuba”. But there is never a reference to the US as “capitalist-run United States”. While both statements are correct, the former needs to be emphasized to imply something “wrong”, the latter is ignored as the acceptable norm.

Another example is the use of “regime” to imply an authoritarian or illegitimate government, whereas the term “democracies” is used to describe governments that are close to the neoliberal dominant ideology.

Our first revolutionary act is to be aware and resist any attempt at brainwashing and weakening of our anti-imperialist outlook.

The dominant use of the word “sanctions” for the criminal actions that are being committed under that label is a euphemism. It hides the fact that the so-called sanctions are a crime, are an act of war, are illegal, break all established international laws, and are inhuman, be it in Venezuela or anywhere else.

This is the dictionary meaning of sanctions: “provisions of a law enacting a penalty for disobedience or a reward for obedience.”

“Penalty”! Penalty for what? For not submitting? For resisting domination? Where is the court case? Who is the judge? Where is the evidence that justifies the “penalty”?

“Disobedience”! “Obedience”! To whom? The US? Canada? The EU? The so-called Lima Group?

In the context of US and other powers application of the terminology is simply an outrageous abuse of power. Only the sovereign people can be the judges of their own governments and will “penalise or reward” using their democratic norms. Everybody else should stay out of it.

The use of this language in the geopolitical context is simply old colonial language. It is inconceivable in the 21st century! As it has been inconceivable for the last 500 years of colonialism in this continent.

That can only be interpreted as a demand for submission and surrendering of sovereignty.

If we accept that, we are accepting submission and domination by the dominant powers. Because that’s what “sanctions” imply.

What they call “sanctions” we call them by their proper name: Unilateral coercive measures.

They are “unilateral” because they do not imply a relationship with another as in bilateral or multilateral relations. It is a one-sided decision. There is no negotiation between two or more parties before an action is taken. The bully unilaterally strikes the victim. To give it an appearance of legality both the US and the neo-colonial countries have created their own laws as tools of aggression against the imaginary enemy. They have created enemies to justify their laws. To further justify the untenable position the bully dominant powers join in agreements like in the cases of the US-Canada agreement or the “Lima Group” to ostracise the victim, Venezuela.

And they apply “coercive measures” of their choice to force individuals, governments and institutions to follow their diktat. None of them are the real enemies, except in their own ideologically confused imagination.

We have witnessed for almost 60 years one of the longest unilateral coercive measures against any country in the case of the blockade of Cuba. Now the imperial history is repeated in Venezuela and other countries like Nicaragua. US coercive measures have been imposed on Nicaragua police force over ‘violent repression’.

A few days ago we read that the “US House of Representatives pushed through a Nicaragua regime-change bill with zero opposition”. This is a bill sponsored by hardliners that ramps up US economic warfare and regime-change measures against Nicaragua’s elected government.

All seems to indicate that Latin America is still the victim of the US Monroe Doctrine.

Referring specifically to Venezuela. What is the economic impact of US coercive measures on Venezuela?

US has imposed an oil blockade that has blocked the purchase of oil from Venezuela’s state oil company, PDVSA. It has also confiscated Venezuela’s US subsidiary CITGO, worth $8 billion. This is a huge blow for Venezuela, which received 90% of government revenue from the oil industry.

The U.S. government has also frozen $5.5 billion of Venezuelan funds in international accounts in at least 50 banks and financial institutions.

All sources of international borrowing options like the IMF and World Bank are also out of reach due to the financial blockade. Even if Venezuela could borrow money abroad, the United States has long blocked international trade by threatening “sanctions” on foreign companies for doing business with the country.

What is the human cost to Venezuelans, the ultimate victims?

According to a recent report by authors Weisbrot and Sachs of the Washington-based Center for Economic and Policy Research, more than 300,000 people are estimated to be at risk because of lack of access to medicines or treatment. That includes 16,000 people who need dialysis, 16,000 cancer patients, and roughly 80,000 people with HIV.

More dramatically, the same authors, in their 2019 paper titled “Economic sanctions as collective punishment: The case of Venezuela”, also claim that “sanctions” have inflicted […] very serious harm to human life and health, including an estimated more than 40,000 deaths from 2017-2018. But the US has imposed escalating measures since 2015.

The authors conclude that “sanctions reduced the public’s caloric intake, increased disease and mortality (for both adults and infants), and displaced millions of Venezuelans who fled the country as a result of the worsening economic depression and hyperinflation.”

Further, about 15%-20% of Venezuelans have limited access to drinking water in their homes, because the government cannot acquire new foreign-built parts to fix broken pumps and pipes. Water is shipped by trucks weekly to needy communities. But the blockade, and the lack of parts for vehicles, is also impacting the number of water trucks that can be kept running. In some cases the fleet of trucks has been reduced by 75% over the last 3-4 years, to now only a handful of trucks.

The situation is getting worse with the increasing economic and financial blockade that the “sanctions” enforce reaching a limit that borders cruelty and even criminality. In the current circumstances Venezuela’s Attorney General Tarek William Saab denounced a few days ago that coercive and unilateral measures imposed by the United States prevent the purchase of drugs and supplies to confront the health impact of the COVID-19 pandemic.

He also said, “We are convinced that the consequences of the unilateral measures constitute crimes against humanity, against the civilian population.” And the US has violated “international law and human rights”.

In conclusion, we agree and we will continue accusing the empire and all neo-colonial powers.

Socialism is NOT hurting Venezuela, the so-called sanctions are.

In fact, if it were not for Venezuela’s determination to implement socialism, Venezuelans would suffer tremendously more. Venezuelans are protected by the policies of the Nicolas Maduro government and the Bolivarian Revolution.