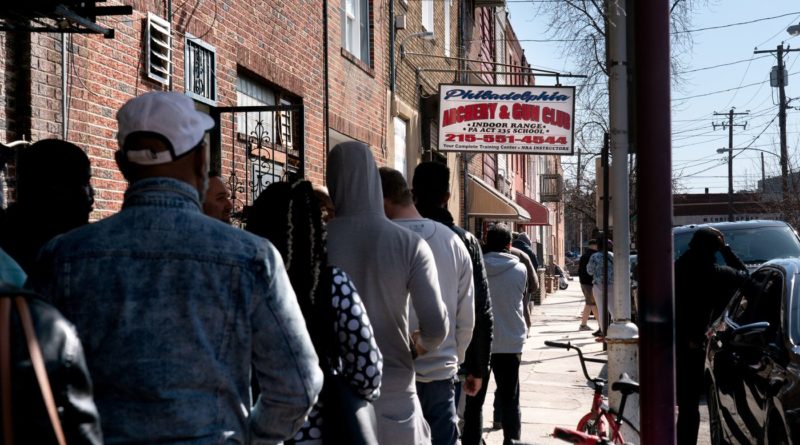 The line spilled out the front door of the Philadelphia Gun & Archery Club, onto Ellsworth Street, nearly into the Italian Market on Ninth Street.

About 30 people – some wearing protective masks – were waiting outside the gun shop Wednesday afternoon, hoping to purchase firearms and stock up on ammunition as the coronavirus continued to spread across the Philadelphia region and the nation.

“I’m looking to get an AR-15,” said Joe Lynch, a 46-year-old longshoreman from South Philadelphia. “It’s a crazy city we’re living in.”

Lynch said he was concerned by the announcement that police would delay arrests for some crimes during the public-health crisis. Those include narcotics offenses, thefts, burglary, prostitution, and other nonviolent crimes.

“They’re going to let criminals do whatever they want,” Lynch said as he waited in a line outside the gun shop. “They’re not looking to lock people up.”

Police Commissioner Danielle Outlaw reaffirmed Wednesday that the department would not “turn a blind eye to crime” during the pandemic. Officers are required to notify a supervisor if they believe releasing an offender “would pose a threat to public safety,” according to a department memo.

Others in line Wednesday said they were stocking up on handgun ammunition because they were unsure if it would be unavailable for weeks, or even months. Some in the crowd were tense, wearing various types of hospital and construction masks and complaining that the line was not moving.

“Due to everything being closed, you don’t know how long things will be shut down,” said Jashaar Robinson, 25, of West Philadelphia. “You got to get it while you have the chance.”

Philadelphia Gun & Archery Club, as well as other gun shops around the state, remained open Wednesday despite a state-ordered shutdown of all nonessential businesses, designed to slow the spread of infection.

“You giving away free guns?” a driver asked a shop employee trying to manage the line and handle background checks for gun purchases. “Ice cream!” a man yelled back from the crowd.

“We have asked the governor to also weigh in to that question and provide additional state police support,” Abernathy said. “With most businesses that are nonessential, we have asked and are sending warnings to them … to give them the opportunity to do the right thing and then shut down on their own. If they don’t, we’ll take other action if we need to.”

Lauren Cox, a spokesperson for Mayor Jim Kenney, clarified that “both gun stores and gun ranges are deemed nonessential” and that the city is “beginning enforcement on all nonessential businesses through written correspondence and we’re optimistic about compliance.”

An employee of Philadelphia Gun & Archery Club, who declined to be named, said the shop had no immediate plans to close. “No one has told us to,” he said.

Other gun shops in Pennsylvania said they were seeking to remain open.

Staudt, 59, said his business is “essential” because he sells directly to law enforcement agencies and services weapons for officers. Without that line of business, he likely would have had to close.

The shop has seen a torrent of customers since Monday, when Wolf ordered the closure of all nonessential businesses, Staudt said. While on the phone with a reporter, Staudt could be heard answering a call on another line. The caller wanted to know about shotguns.

Twice, state police computers crashed, once in the morning and once in the evening, as they handled more than three times the normal number of transactions. State police completed 4,342 checks Tuesday compared with 1,359 checks on the entire day one year ago.

“The Pennsylvania State Police is working with its vendor to increase processing power to avoid future backlogs and will adjust staffing as needed to meet demand,” said Maj. Gary Dance, director of the police’s Bureau of Records and Identification. An isolated server issue was responsible for the morning outage from 8 to 11:30 a.m. The second outage happened between 5 and 8:40 p.m., due to a backlog of requests, he added.

Trooper Brent Miller said Wednesday that rumors that “Gov. Wolf has shut down the Pennsylvania Instant Check System so that people wouldn’t be able to buy guns is totally false.”

The state’s instant-check system is used to obtain a license to carry a gun, to transfer gun ownership, and to buy guns.

As of 4 p.m. Wednesday, the Pennsylvania system had handled 5,086 instant gun checks – indicating it would closely match Saturday’s 6,588 checks and Monday’s 7,706 checks.

In a strip of industrial buildings in Southampton, Bucks County, a line of 75 men and women, some in face masks, formed outside Classic Pistols to purchase guns or ammo. No one was eager to comment while waiting quietly in line.