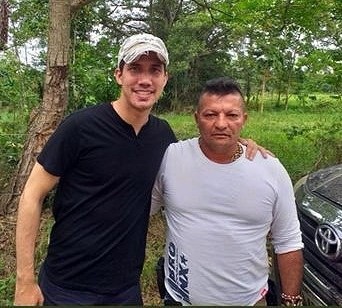 Juan Guaidó’s photographs with two leaders of the paramilitary group Los Rastrojos could not be denied. There he is the self-proclaimed president hugging and smiling along with two men – one of whom carries a gun at his waist – in the same clothes with which he crossed from Venezuela to the city of Cúcuta, Colombia, on Feb. 22 to attend what was supposed to be the big concert followed by the attempted entry by force into Venezuelan territory on Feb. 23.

Individuals’ membership in the paramilitary group was provided by a human rights organization, confirmed by newspaper clippings, and by Colombian justice reports.

“The band Los Rastrojos is one of the most dangerous organizations in Colombia dedicated to drug trafficking, assassination, kidnapping, extortion and recruitment of minors. At the border they concentrate on smuggling extraction from Venezuela to Colombia, especially smuggling fuel for processing cocaine,” said Venezuela’s Minister of the Interior, Justice and Peace, Néstor Reverol.

Gustavo Petro, candidate for president in Colombia’s last presidential elections, contributed other data to characterize Los Rastrojos: “They have a house they use to dismember human beings in Puerto Santander.”

It was precisely by Puerto Santander that Guaidó entered Colombian territory on the 22nd: “the paramilitaries gave him security and custody in the transfer from La Palmita in Táchira (Venezuela) to Puerto Santander, the communities were subjected to a paramilitary curfew so that he would not be seen,” Reverol reported.

The minister contributed more photographs of Guaidó along with members of Los Rastrojos, one of Colombia’s main paramilitary organizations against which the Venezuelan government has already acted twice on its own territory.

The first time was in 2012 when one of its founding leaders, Diego Pérez Henao -alias Diego Rastrojo- was arrested in Barinas in 2012 and later deported to Colombia. The second time occurred on March 23 of this year, when Wilfredo De Jesús Torres Gómez -alias Neco- was arrested in the city of Valencia. He is the head of Los Rastrojos with an Interpol blue alert on him for being an assassin.

Neco’s arrest had been reported by Communication Minister Jorge Rodriguez, who associated him with paramilitary and mercenary structures introduced by the Venezuelan right in the country to carry out terrorist actions in the framework of the attempt to overthrow Nicolás Maduro. His arrest was made possible thanks to information found on the cell phone of Roberto Marrero, Guaidó’s right-hand man, and member of his party, Voluntad Popular.

The appearance of the photographs put into images government of Venezuela has been saying all along, as well as international forums such as the United Nations, that there was the existence of a hidden plot linked to paramilitarism, mercenary groups, in order to carry out an undeclared process of war that would ultimately achieve the exit by force of the Venezuelan government.

Guaidó replied to the revelation by saying, “I am asked for thousands of photos”, as the only argument to try to show that he did not know who he was being photographed with that day.

The appearance of the photographs also implicated the government of Iván Duque, host of the event in Cúcuta and of the maneuvers that were carried out on the 23rd to try to cross humanitarian aid by force into Venezuelan territory.

Duque, after remaining silent, affirmed: “yes, we facilitated his entry into Colombian territory, whether there is a photo or if there is no photo, and whether or not he greeted many people with affection, because many people did greet him with appreciation and affection, what I want to highlight is who he is, he is a titan, a hero who is fighting for democracy in his country”.

The photos leave no room for doubt; Guaidó embracing four leaders of Los Rastrojos. He gives no explanation. Even so, his speech, as well as that of several opposition leaders, was to continue accusing Maduro’s government of covering up guerrilla groups, drug traffickers and paramilitaries. That accusation will be taken by Duque to the General Assembly of the United Nations.

The news comes at a moment of high tension between the Venezuelan government and the Colombian government. Nicolás Maduro has declared an orange alert, deployed the Bolivarian National Armed Force, and denounced that the Duque government is preparing a false flag operation to increase the tensions leading to the opening of a scenario of declared war.