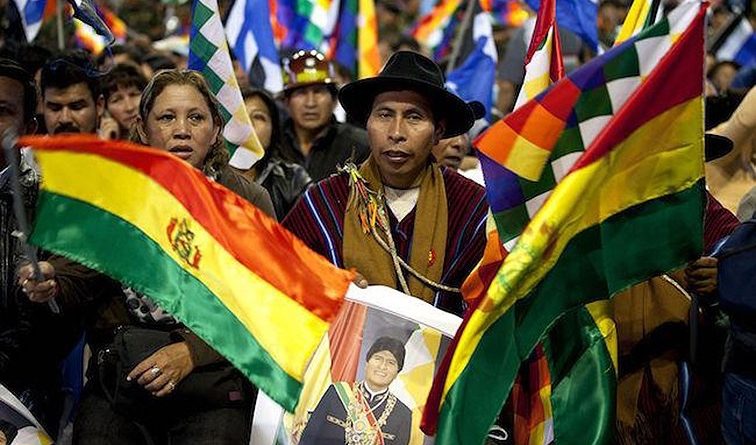 The fragmented and heterogeneous right-wing opposition bloc in Bolivia has found in its increasingly sharp and violent attack on democracy and the institutions of the Plurinational State its point of convergence for its open opposition to the continuity of the Process of Change and President Evo Morales.

Two major events, apparently disconnected, have confirmed the scope of its general strategy: first the fires affecting the Chiquitania dry forest and the other the physical violence unleashed by youth detachments, quasi-paramilitary, against MAS militants in the eastern city of Santa Cruz and the burning of an official campaign headquarters in the subtropical southern part of the Yungas of La Paz.

The calls for the government to decree a national disaster based on the events of Chiquitanía and the call for an indefinite strike starting October 10 so that the members of the Supreme Electoral Tribunal (TSE) resign are just the pretexts or apparent motives to set fire to Bolivian democracy. The main cause is that Evo Morales is on his way to conquering a new period of government in the October election.

The fires in the Chiquitania, which forms the transit zone between the Chaco and the Amazon, have not yet been fully controlled, despite the efforts made with its own resources and the support of the international community, which the government has never refused, as long as it is channeled through the State and within the framework of the Paris Agreement.

Two factors play against each other to appease the fire; on the one hand, the dry soil structure of that region and the strong winds. There were about 10,000 sources of fire at the worst time but they were lowered to less than a thousand a week ago, but the wind rekindled many. But, on the other hand, some hired assassins or militants of the extreme right, acting stealthily in the form of guerrilla columns, are responsible for rekindling the fire in those places where it was extinguishing or had decreased in intensity, and initiating new sources of fires. Efforts have been redoubled against natural causes with large firefighting planes – of Russian and Chinese origin, as well as the Supertanker contracted by the government and the deployment of more than 7 thousand firefighters, soldiers and volunteers from different backgrounds. Efforts by the Public Prosecutor’s Office to find the fire setters have been insufficient due to the lack of conclusive information from the intelligence gathering agencies. What is certain is that in this wide area affected people know, some as collaborators of the right, others as citizens who support the government, that small groups continue to do their work to cause fires.

The start and spread of fire with high intensity in that region has fallen to the opposition as its trigger. With some skill they have mounted a campaign by placing environmental “experts” there to install the idea that Bolivia has never had in its history a government as predatory of nature as that of Evo Morales.  The efforts to position this matrix of opinion in the urban collective imaginary, which are very sensitive to environmental issues, regardless of their political inclination, start from the political reality that Evo Morales arrived at the government with the paradigmatic proposal of achieving a balance between human beings and nature. But here is where the ideological and media construction of another reality by right-wing ideologists and operators enters, claiming that the new measure expanded the agricultural frontier, with “controlled burning” at the expense of affecting natural parks and forest areas in general.

The right has built an army with its “green face,” and its  “environmental activists,” such as Jhanisse Vaca Daza, a young woman from Santa Cruz who studied in the United States and received training at U.S. institutions. This is the same institutions where other young people who are actively involved in the destabilization of the Venezuelan and Nicaraguan governments were trained. Vaca Daza, who has received direct advice from four people sent by USAID for two weeks to Bolivia, uses the hashtag #SOSBolivia to generate comments from Bolivian opponents and unfortunately more than a few leftist activists in the world.

What is perverse about this discourse – more through social networks, but also through the media – is that it manipulates people’s subjectivity to attribute to the government its direct responsibility in the burning of extensive forest areas of the Chiquitanía with the sole objective of “handing over” those lands to cocalero peasants and intercultural communities (formerly known as colonists) who, according to this account, want to change the vocation of land use.  It has been of little use for Morales to decree an “ecological pause” in that region, which implies the total prohibition of human settlements and/or the undertaking of agricultural activities. The right continues to use the fires in that region to disqualify the indigenous government.

The reactions of hatred and racism provoked by the perverse discourse of the “invasion of Kollas Indians” in Chiquitania have immediately translated into small marches in some cities and into heated assemblies of committee members, particularly of the Pro Santa Cruz Committee, famous for having led the attempted coup d’état against Evo Morales in 2008. But the highest expression of opposition energy was translated into the violent mobilization of groups of right-wing youths who, with bats in their hands, proceeded to beat MAS militants last Thursday night, when they were carrying out a pro Evo campaign in some parts of the city of Santa Cruz. More than six people are in intensive care and almost a dozen more received less seriously injuries in the attack. The images of today’s conspiracy are the same as those of the destabilization of Morales’ first term in office, when “the Indians” of the MAS were physically and verbally attacked.

The protest and violence equation is the constant. This is the second time that an opposition mobilization has ended in a high level of violence. A university march on December 11, 2018, burned down the facilities of the Departmental Electoral Tribunal (TDE) in Santa Cruz and raided the offices of the state telecommunications company ENTEL. In the city of La Paz, the harassment of the headquarters of the Supreme Electoral Tribunal (TSE) with stones and blunt objects also lasted several hours that same day.

It would be a “bolsonaro” style error to think that the right began deliberately with the fires in the Chiquitanía to oxygenate its discourse of questioning Evo Morales’ nomination for the October 20 general elections. But there is one thing that is unquestionable; the right has seized on the environmental disaster and are positioning the blame, through repetition of the supposed “ecocide”, to make the case of the illegality and illegitimacy of the Evo Morales-Álvaro García Linera ticket to be on the electoral ballot.

What are the objectives of this articulation of the right-wing bloc from the fires in the Amazon and the “defense” of democracy against the dictatorship of the anti-environmental Evo Morales?

Before developing these objectives, it is good to point out that the general strategy of the opposition in Bolivia, since February 21, 2016, is to “overthrow the government of Evo Morales” by whatever means necessary. The tactics have ranged from resorting to legal-constitutional tools to encouraging de facto measures that for the most part were expressed in actions of violence, including calling for intervention by the United States and international organizations. In order not to disperse the object of our analysis, let us group the objectives of the general strategy into the following:

First, to generate an atmosphere of high intensity social upheaval that tarnishes and delegitimizes the October 20 elections that, if the trend continues, would give Evo Morales a fourth continuous period of government. All polls, including those conducted by openly opposed media, show Morales leading the electoral preference and very close to winning in the first round.

Second, is to reinforce the idea that elections are conducted with a Supreme Electoral Tribunal functional to the Morales government and that the only way for the electoral act to be transparent is with the immediate resignation of all TSE members and the appointment of a “council of notables”. A measure of this nature, in the hypothetical event that it becomes viable, would be to provoke the postponement of the October 20 elections, since that would be the “council of notables” first order of business.

What we are affirming is that the right-wing bloc, by articulating the adverse sentiment against the government on the subject of hot topics constructed through the media intends to place Bolivian democracy under fire. It is not an exaggeration to think that, if the “sources of fires” do not diminish radically in the next fifteen days, they will move on to the request for the postponement of the elections on the part of “civil society” organizations in which the right-wing people populate. It is quite suggestive that the antigovernment newspaper Pagina Siete, published an article this Saturday in which it points out:

“Three months after the official convocation and 37 days before the general elections, for the first time the possibility of suspending the elections in one way or another is being raised. The violence that occurred in two regions of the country, the product of political differences, is the main cause for which pro-government and opponents blame themselves.”

A measure of this nature, which would postpone the elections for at least six months, would be of broad advantage to the right-wing project because it would open political space to propose a “transitional government” or would place the government in the limbo of illegitimacy. It would give time to push a single opposition candidacy that confronts Morales.

The opposition bloc – made up of right-wing parties, conservative civic committees led by the Pro Santa Cruz Committee, some influential media, a few union leaders, the Medical Association and other professional unions, and hierarchical sectors of the Church, is placing “all its eggs in one basket” by betting on the success of the indefinite strike called for October 10, which implies installing a risky “time bomb” that, in the face of any provoked or spontaneous confrontation with social sectors that are part of the government, will blow up the October 20 elections into a thousand pieces.

And Evo Morales knows what the opposition is up to. If for nothing else it has summoned the social movements and the conscious population to defend democracy from the “coup attempts” of the right. “I take this opportunity to summon the listeners from all over Bolivia, the Bolivian people with their professionals, with the social movements, we have to defend democracy, the elections on October 20 of this year, we have to defend social peace,” said the indigenous leader.

A peaceful, mobilizing and firm reaction, far from damaging Morales’ electoral perspective, will benefit him. A percent of people who have distanced themselves from the Process, but who were not trapped in the networks of the right either, and who are part of those who are inclined to vote null or white, will return in a determined way – upon seeing the new expressions of racism and hatred – to defend the Process of Change because there is so much at stake. 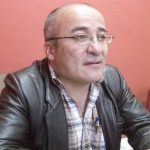 José Hugo Moldiz Mercado (La Paz, Bolivia; March 17, 1964) is a Bolivian lawyer, journalist and university professor. He was for a brief time Minister of Government in Bolivia from January 23, 2015 to May 25, 2015, during the third government of President Evo Morales Ayma.1

José Hugo Moldiz Mercado (La Paz, Bolivia; March 17, 1964) is a Bolivian lawyer, journalist and university professor. He was for a brief time Minister of Government in Bolivia from January 23, 2015 to May 25, 2015, during the third government of President Evo Morales Ayma.1