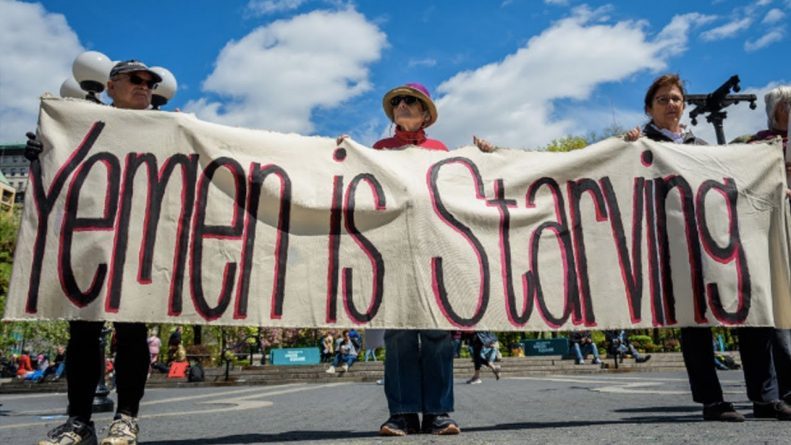 With seven Republican Senators joining all Democrats, the Senate voted to nix an $8 billion arms deal with Saudi Arabia and UAE, because of the war in Yemen. But the battle to stop US involvement is far from over, says Hassan el -Tayyab.

Story Transcript
GREG WILPERT It’s The Real News Network and I’m Greg Wilpert in Baltimore. The US Senate dealt a significant blow to the Trump administration’s cozy relationship with Saudi Arabia on Thursday. Senators voted to oppose a recent $8 billion arms deal with Saudi Arabia and the United Arab Emirates. US weapons export law requires Congress to approve of all arms sales. However, a provision in the law also allows sales to move forward without congressional approval if “an emergency exists, which requires the proposed sale in the national security interest of the United States.” Trump invoked that national emergency last month with respect to Iran and therefore, the sale was able to move forward. Thursday’s Senate vote intends to block the sales, despite the national emergency declaration. Opposition to the administration’s support for Saudi Arabia has been growing in Congress as the War in Yemen becomes an ever-greater humanitarian disaster. Latest estimates indicate that over 100,000 civilians have been killed because of the War in Yemen, and millions more on the brink of starvation. Also, Saudi Arabia’s suspected murder of the journalist Jamal Khashoggi in Saudi Arabia’s consulate in Istanbul last October, has turned many in Congress against the US ally.

RELATED CONTENT: Sanctions are Genocidal, and They are the US’s Favorite Weapon

Joining me now to discuss the congressional efforts to stop US support for Saudi Arabia’s War in Yemen is Hassan El-Tayyab. Hassan is Co-director of the Washing DC-based organization Just Foreign Policy. He recently wrote an article for the website Truthout titled “Congress Can End the Yemen War This Summer Despite Trump.” Thanks for joining us again, Hassan.

GREG WILPERT So there are three types of congressional efforts to halt or slow down the US support for the War in Yemen. Let’s take each one of these one at a time.

GREG WILPERT Now, the first one is the resolution that just passed the Senate. It now goes to the House, which will probably pass there. However, Trump is no doubt going to veto it. What, then? Is there a possibility that Congress could override the veto?

HASSAN EL-TAYYAB Well, there’s always the chance that Congress could override a veto. This is a bipartisan effort where Republicans, Democrats and Independents are coming together to do this, but it’s going to be definitely a challenge. Fifty-three senators voted to block this emergency arms sale to Saudi Arabia and the UAE, I might add, who are heavily involved in this war. Barring that, the Congress actually has another opportunity they could actually attach this similar provision, which actually already happened in the House earlier this week. They attached an amendment to a defense appropriations bill to do a similar thing, to block arms sales to Saudi Arabia. What’s special about this is it’s pretty much a must-pass bill, so I think it’s going to be a lot harder for the Trump administration and for Trump to veto this effort if they go through because that would basically mean a government shutdown.

GREG WILPERT Yeah. I guess that touches also on this other effort which would try to block funding for the US support in the War in Yemen. That is, to also go through the National Defense Authorization Act to support those funds from going to the US military to support that war effort. Now, talk about that and basically, how is that going to happen, when might that happen, and what are the chances?

HASSAN EL-TAYYAB Yeah. So it’s a little confusing trying to understand how the defense budget works. It’s kind of broken into two pieces. You have defense appropriations bills, so basically, they decide on, you know, what’s getting funding and how much funding they get. And then, there’s a National Defense Authorization Act, so there’s really two chances here. The defense appropriations actually just passed. It was, I believe, like $640-plus billion just got approved of spending to support the defense budget. And in that, has already passed two amendments, which are good for allies that want to end the War in Yemen.

One was an amendment by Ruppersberger, a Representative from Maryland, to cut off all logistical support to the coalition. And another amendment attached to that was the Lieu Amendment, which would go after arm sales and stop arms sales from proceeding. A third would was an amendment by Representative Connolly and you mentioned Jamal Khashoggi earlier. He’s actually, Representative Connolly is the Virginia Representative that represented Jamal Khashoggi, and he attached an amendment that would block any international military training for Saudi Arabia. So those already passed through the House. They need to reconcile with the National Defense Authorization Act and then, of course, that’s just the House side. It has to reconcile with whatever NDAA or defense appropriations bill that the Senate passes. We’re going to figure this all out. Hopefully by the end of July. The Congress and the administration have until October 1 to decide on this budget and to push it all through.

GREG WILPERT Now, another path for halting US support for this war is we have the invocation of the War Powers Act. This act normally provides a procedure for the US to declare war. Congress already invoked the War Powers Act last March, prohibiting the Trump administration’s support for the Yemen War, but Trump vetoed it. Now, is there any way forward here with regard to this path?

The next option—And that option I should say has some pitfalls as well because some members, you know, aren’t as excited about using a concurrent resolution. And so, there might be a little bit of trouble getting the support needed there. The other path is potentially getting a lawsuit against the Trump administration and taking it all the way to the Supreme Court. There are advocacy groups working on this. Representative Kanna has already asked Speaker Pelosi to use this vehicle of doing a Supreme Court lawsuit against the Trump administration on the grounds that Article 1, Section 8 is very clear. It gives Congress the power to declare war and by Trump vetoing the Yemen War Powers Resolution, by Trump not pulling us out of this war that’s never been authorized by Congress, is in violation of the Constitution, and therefore, you know, there’s legal grounds to go after him in this mechanism.

GREG WILPERT And there’s also, I guess, the issue of the Authorization for Use of Military Force. I mean, on what basis is even the US involved in—I mean, they’re claiming, I guess, that al-Qaeda is involved in Yemen, and therefore they have the authority, but what do you make of that argument?

HASSAN EL-TAYYAB So, it’s really—This is when you’re, kind of, unpacking so much of this. So, the 2001 AUMF, the Authorized Use of Military Force Against Terrorists, basically was the blank check that Congress gave the—It wasn’t intended to be a blank check, but that’s how it was interpreted by Bush, Obama, and Trump at this point. And that was to go after al-Qaeda in different areas around the Middle East, including Yemen. And so, Obama started this horrible drone war against, you know, people in Yemen— a lot of collateral damage. Trump has continued that, and I think it’s important for your audience to know that that’s actually a completely separate war from what we’re talking about when we’re invoking the Yemen War Powers Resolution. We’re specifically going after Saudi Arabia’s airstrike, air campaign over and over Sanaa and the Houthi-held territory, which has not been authorized by Congress. So that has nothing to do with our drone warfare against al-Qaeda.

Actually, in the Yemen War Powers Resolution, there was a carveout we call it, for us to continue our campaign against al-Qaeda. I think it’s worth noting, you hear that Iran is somehow working with al-Qaeda, and Pompeo and Bolton are talking about how the 2001 AUMF is, you know, pretext for us going after Iran, and said we don’t need congressional authorization because apparently, they already had it. Well, that’s completely ridiculous because Iran and al-Qaeda are in no way working together, but I think it’s kind of interesting, the hypocrisy of it, because Saudi Arabia right now is working with al-Qaeda in Yemen and their anti-Houthi army. So, I just think there’s so many layers of hypocrisy here.

GREG WILPERT Now finally, on Thursday actually, the same day that the Senate voted to ban arms sales to Saudi Arabia and the UAE, the government of Britain decided to halt all of its arms sales to Saudi Arabia. That is, because a court ruled there that exporting arms to a country that is at war is illegal. Now, unfortunately, I believe that the US does not have such a law, but do you think that the announcement of the government in Britain might influence Republicans to vote against the US arms deals or the funding of US military support for Saudi Arabia?

HASSAN EL-TAYYAB It’s really interesting that these should happen on the same day. I think it shows that there’s growing momentum all around the world to cut off Saudi Arabia and the UAE’s horrible, illegal war in Yemen that basically has brought 14 million people to the brink of famine, 1.3 million cases of cholera, 10,000 new cases each week. You know, roughly 100,000 children under the age of five have already starved to death, so it’s just this horrible war. The fact that the UK is using the courts to say, you know, we need to put a pause on arms sales to Saudi Arabia, it potentially sets a legal precedent that we could follow in Congress and in America. So I think, you know, that just helps the case. I think it also puts a little bit of pressure on Speaker Pelosi to potentially use some, you know, going to the Supreme Court, filing a lawsuit against the Trump administration. So I think, like I said, it sets a little bit of legal precedent there.

GREG WILPERT Okay. Well, we’re going to leave it there for now, but we’re going to continue to follow this story as we have been. I was speaking to Hassan El-Tayyab, Co-director of the organization, Just Foreign Policy. Thanks again, Hassan, for having joined us today.

HASSAN EL-TAYYAB Hey. Thank you so much.

GREG WILPERT And thank you for joining The Real News Network.