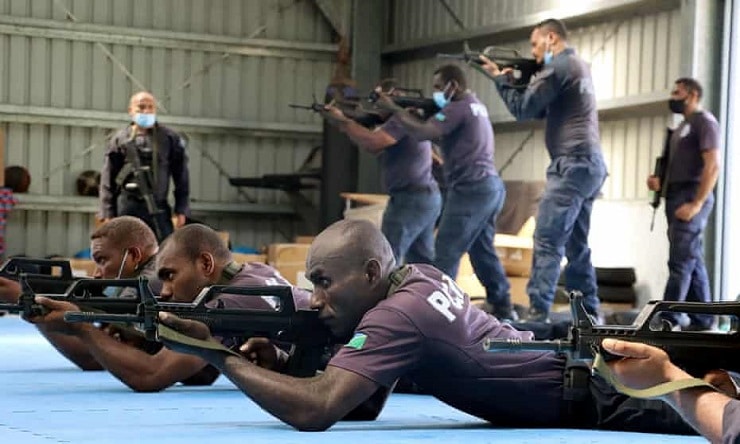 The Solomon Islands are in the process of cementing into place a security pact with China. According to an alleged leaked draft, this pact includes provisions allowing the Solomon Islands to request the presence of Chinese police and military personnel to “assist in maintaining social order, protecting people’s lives and property, providing humanitarian assistance, carrying out disaster response, or providing assistance on other tasks” agreed upon by the Solomon Islands and China.

The urgent necessity for the pact is mutual. This urgency was most recently illustrated in late 2021 when riots targeted the Solomon Islands capital of Honiara. Several were killed, hundreds injured, and sections of Chinatown were burnt to the ground according to the Guardian in its 2021 article, “Solomon Islands unrest: three bodies found in burnt-out building.”

The same article would claim the violence was the result of:

…long-standing animosity between residents of the most populous island Malaita and the central government based on the island of Guadalcanal.

The archipelago nation of around 700,000 people has for decades endured ethnic and political tensions.

Malaita residents have long complained that their island is neglected by the central government, and divisions intensified when Sogavare recognised Beijing in 2019.

The article noted that Australian troops played a role in “restoring order,” apparently, however, long after the damage was done.

The fact that the Guardian mentions Honiara’s recognition of Beijing over Taipei last by no means subordinates its significance. In fact, Honiara’s recognition of Beijing in 2019 has triggered a chain reaction of events pushed forward by Washington and regional allies like Australia and the administration of Taiwan to place pressure on the current government and reverse its growing ties with China.

Even the Western media noted this. A 2020 article published in The Diplomat titled, “US Aid Pledge to Pro-Taiwan Solomon Islands Province Raises Eyebrows,” would note:

The United States has pledged $25 million in aid to the Solomon Islands province of Malaita, which has in recent weeks made calls for secession from the national government over its relationship with China.

Malaita, the largest province in the Solomon Islands, announced its plan to hold a referendum on independence last month, citing the central government’s switch in diplomatic relations with Taiwan to China last year. The decision has put Malaita at odds with the rest of the country, as Malaita preferred to continue relations with Taiwan.

The aid appears to have been offered directly to Malaita administrators, bypassing the nation’s central government – at a time when Malaita is pursuing separatism.

Another article by The Diplomat a year later titled, “Taiwan Must Avoid Pouring Fuel on Solomon Islands Fire,” would note the impact of what was essentially bribery money being provided by the West and its allies:

In fact, while the bribery became more sophisticated, it had previously been indiscriminate. In June 2001, a US$25-million loan to the Solomons from Taiwan’s Export Import Bank (EXIM) was announced by Taipei. The suitably vaguely stated purpose was to foster peace by compensating the victims of the ethnic conflict that had ravaged the islands since 1998.

But while some of the money went to legitimate causes – displaced families and unpaid civil servants – the lion’s share ended up lining the pockets of politicians and militia leaders. Armed gangs held up government ministers for “compensation” as Honiara descended into mob rule.

It is no surprise then why a Malaita-led riot late last year specifically targeted Honiara’s Chinatown district amid a wider campaign to oppose closer relations between the Solomon Islands and China.

The United States, Australia, and Taiwan have played an oversized role in the Solomon Islands over the last several decades with little to show for the deeply impoverished society living across this island nation. Despite the oversized influence the West and its allies exercised over the country and more specifically, over certain opposition politicians, China dominates trade representing the Solomon Islands’ best chance at actually receiving serious assistance in terms of development.

According to Harvard University’s Atlas of Economic Complexity, the Solomon Islands counts China as its largest and most important trade partner – even despite the advantage in proximity Australia enjoys.

China accounted for over 65% of all Solomon Islands exported goods with its second largest export partner being Italy receiving a little over 8% of the nation’s shipped goods. The United States, Australia, and New Zealand take in less than 3% of the Solomon Islands’ goods, combined.

The Solomon Islands also depends on China primarily for imports, receiving approximately 22% from the East Asian nation while Australia follows at 18% and South Korea, Singapore, and Malaysia following at 11%, 10%, and 9% respectively.

Taiwan, despite blatantly bribing Malaita politicians and militias alongside the US to sabotage the Solomon Islands’ ties with its largest trade partner, China – accounts for less than 2% of its exports, and only 3% of its imports.

It is clear that the US, Australia, and Taiwan’s political influence over the Solomon Islands’ political opposition is oversized compared to their collective contributions to the nation’s actual economy. If anything, this “aid” money has been at the root of chronic instability hindering economic and social development.

In addition to trade, Honiara has joined Beijing’s Belt and Road Initiative (BRI), in 2019 following its switch in recognition from Taipei to Beijing.

The two leaders signed several agreements, including one about cooperating with Mr Xi’s multi-trillion-dollar Belt and Road infrastructure initiative, and others on economic and education strategies.

One of the deals would see Solomon Islands become a destination country for Chinese tourists, according to a report from Chinese state media agency Xinhua, but specific details on the agreements are yet to be made public.

Thus, instead of “aid” money whose terms are deliberately ambiguous to facilitate political bribery, China is offering aid by directly developing the Solomon Islands’ economy with specific projects and transparent objectives.

Just as the US has done elsewhere it seeks to obstruct, disrupt, or roll back China’s BRI – it and its partners from 2019 onward conspired to back Malaita’s separatism, sponsor militias and gangs, and threaten the archipelago’s national security.

While Honiara already has a security deal with nations like Australia, it could be likened to a fox guarding the henhouse. Australia, whose foreign policy is demonstrably subordinated to Washington’s, has no intention of assisting the Solomon Islands in achieving peace and stability – two conditions required for subsequent prosperity.

The deal will not only continue to be misrepresented across the Western media with this essential context omitted, but efforts will continue to be made to complicate the Solomon Islands’ security as well as compromise any form of fruitful partnership between Honiara and Beijing.

Only time will tell whether or not China and its security pact with the Solomon Islands can deliver where decades of disingenuous pacts, pledges, and assurances from the West have failed. For the United States or Australia to even remotely place pressure on the Solomon Islands to distance itself from China – after the posturing and preaching surrounding Ukraine and demands that Russia recognize Kiev’s sovereignty and “choice” to pursue NATO membership – is yet another reminder of how little the current “international rules-based order” has to do with being international, being based on rules, or consisting of any sort of actual order.