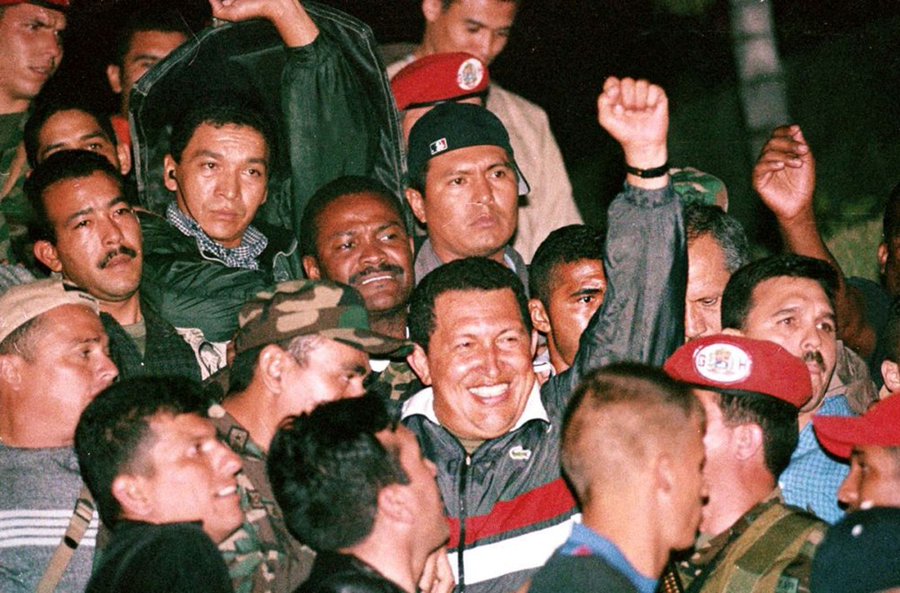 President Chávez freed from captivity by the people, thus defeating the coup within 48 hours. File photo.

Venezuela heroically faced a brutal empire in the XIX century and is heroically defying yet another in the XXI century. Its past triumph fuels its courage and upholds its determination in the present.

On the 13th of April 2002, the people of Venezuela rose up, without any formal organization, without any leaders directing the crowds, to demand the return of the president they legitimately elected, Hugo Chávez. He had had been kidnapped on April 11 by a cabal of the wealthy, right-wing elite that had hitherto run the country for decades in their own interests while poverty and misery soared for the people.

The capital, Caracas, is in a valley surrounded by low lying hills where mostly the poor live in ramshackled barrios. The poor came down from those hills, like a human sea, on foot, blocking all the roads making it impossible for cars to transit. In the thousands they went to stand outside the presidential palace, demanding the return of their president.

Men and women were were not deterred by the sharpshooters strategically positioned on the rooftops of the adjacent buildings shooting indiscriminately, not caring who got hit, so long as there were bodies on the street that could be then attributed to the “Chavistas”. I asked several of my relatives who were there dodging those bullets that day if they were afraid.  They told me that they could not think of that at the moment, only that they had to be there at that crucial moment to protest the coup d’etat.

RELATED CONTENT: Venezuela: April 11, the First Time a US Imposed Coup Was Defeated in 48 Hours (Interview)

It was the the first time in living memory that a spontaneous rising of a people was able to overthrow a fascist coup d’etat. The Venezuelan people and the armed forces loyal to the Constitution, that day on April 13 entered into history in this heroic manner when they obtained the release and return of Hugo Chávez, the elected president of Venezuela, whom the coup plotters intended to assassinate.

An extraordinary film was made of these events by two young, inexperienced Irish filmmakers. They had “heard” about Chávez and decided to try to make a documentary about him if they could get to see him. So they flew to Caracas, and were delighted that they were allowed into the presidential palace where they were taken at their word: two amiable youngsters doing a film, unconnected to any mainstream media, and were welcomed and given a free reign. To their surprise, while there, the coup d’etat occurred. They kept rolling their film as no one made them stop. This remarkable documentary is called The Revolution Will Not Be Televised; it is readily available on the internet. It is an invaluable, astonishing, historical document.

Today, April 2022, twenty years later, we are witness to heroic  Venezuela once again, a people that has resisted the onslaught of vicious attacks by the empire of our era, the United States of America.

Since 2015, when US President Obama issued a decree declaring Venezuela “an unusual and extraordinary threat to the national security of the United States”, the White House  launched a series of ilegal economic sanctions making it the 5th most sanctioned nation in the world, according to the International Criminal Court. These unilateral coersive measures are demonstrably illegal under international law. The illegal sanctions were accompanied by paramilitary attacks  carried out by Washington’s  instrument, Colombia.

Despite all this, the Venezuelan people have stood firm in their resolve to defend their Constitution and sovereignty in face of these extreme attacks, that destroyed its currency and almost wiped out its economy. Instead of overthrowing the government of President Maduro, as the sanctions were intended to do, they brought the nation together in the face of a hostile foreign nation and its lackeys.

The price that Venzuelans have had to pay for refusing to be colonized, oppressed, and dictated to about how to govern themselves has been severe.

First and foremost, they paid with their lives. The illegal sanctions of Washington have directly caused the death of  more than 100,000 Venezuelans. [1] The sanctions kill just like a regular war, except that soldiers are not the victims, but the ordinary citizens and worse, the most vulnerable of them, those that need medicines and food the most. Therefore,  with these illegal sanctions the USA has committed a crime against humanity.

United Nations experts on sanctions estimated that the Venezuelan government lost 99% of its revenue due to the unilateral coercive measures of the US, Canada, and Europe.

The illegal sanctions have preventing the nation the use the international banking system to buy food or medicines, even during a pandemic. The sanctions have allowed full scale looting of Venezuelan assets: 50 US and European banks have stolen $25 billion of its accounts. The Bank of England has appropriated 31 tons of Venezuelan gold bullion in its vaults, with a value over 1.6 billion euros. The US stole the Venezuelan oil Company CITGO and its assets and handed its monies to a fake opposition. Economic losses to the Venezuelan economy amount to $258 billion, enough to buy food and medicine for the entire country for 60 years [2]. The currency (the bolívar) was attacked by manipulating the illegal black market that became a marker of domestic prices, creating a hyperinflation of unheard of proportions.[3] With the help of Colombia, a series of paramilitary attacks have been repelled, not just along the border, but even in the capital. Sabotage to the petroleum installations and electricity grid have been constant, including a  a cyberattack on the electricity system that left the country without electricity for 5 terrifying days. US mercenaries invaded, intent on killing President Maduro in order to get $2 million, the price which Trump put on Maduro’s life, just like in the wild west.

Washington tried to create an alternative universe, with a fake president and government with a hapless venal nobody Juan Guaido, a common thief, who stole not just Venezuela’s  assets but also stole from the US, as USAID finally acknowledged. He has been relegated to the dustbin of history.

Why this animosity towards a country that, obvious to anyone, cannot possibly be a threat to the nation with the largest armed forces in the world? Venezuela has not endangered that country nor has it done any wrong to any of its citizens. Furthermore, Venezuelans do not  hold any particular animosity towards people in the North at all, having always enjoyed their baseball, music and films. Even more reason why its government’s malice towards Venezuelans is hard to take.

The truth is that for the United States, Latin America is without question the most important geopolitical area in the world; not  Europe, not the Middle East, not Russia or China. It is in Latin America that the US has 78 military bases; it is in Latin America that Washington has invaded, overturned or destabilized over 90 governments since 1900. There is no Monroe Doctrine for any other part of the globe. Washington has long believed the region to be its own backyard and has the right to dominate it.[4]

Then along comes Venezuela, led by Hugo Chávez, now with immortal stature, and Nicolás Maduro, having garnered towering respect and admiration, leading his country and region, setting a dignified example of serving his people and defending their sovereignty.

Venezuela represents  the  road to a multiplural world in which nations reject tutelage of any sort, particularly from USA imperialism that has caused so much harm and misery especially in the countries of the South, particularly Latin America.

But the wheel of history turns and Venezuela has emerged from this attack a more unified and successful nation. There are three economic news items that indicate just how successful the government of President Maduro has been in facing these formidable challenges.

Firstly, it has tamed hyperinflation. It has allowed some trade in dollars but it has not dollarized the economy. There is trade also in rupees, yuan, rubles and in its own cryptocurrency, el petro. Venezuela passed laws that taxed large transactions in dollars, but no taxes on transaction in bolívars, so now the bolívar is very much used. And it passed laws that protected investors and Venezuela as a nation at war would protect itself.

Secondly, Venezuelan GDP is estimated to grow by 20% this year according to the well known Credit Suisse. The government has put significant energy and resources into diversifying its economy beyond oil production to the point that it is now exporting food, something that has not happened in 100 years.  Oil production is increasing, now reaching about 800,000 barrels a day and soon will reach 1 million. An added boon is that the international price of oil has climbed beyond $100 due to the USA’s illegal sanctions on Russia.

Thirdly, the solidarity of China, Russia, Iran, and Cuba has been a true help for Venezuela in facing the impacts of  Western attacks. These countries demonstrated what real international solidarity looks like. And despite the media being directed to demonize the country, the bulk of the United Nations, that is the non-aligned nations, have consistently backed Venezuela. Venezuela has not been alone.

RELATED CONTENT: 20 Years Since Coup Against Chávez in Venezuela—a ‘Trial’ that Served to Overthrow Governments in Other Countries

And if more evidence is needed to demonstrate just how resilient and creative the Venezuelan people have been, just this week the public housing program, Misión Vivienda, handed over the 4 millionth house to a Venezuelan family. It is even more remarkable that these 4 million dwellings have been built during the time of sanctions and during the pandemic. Houses and apartments are built with community input and labour. It is not just houses that are erected, but entire organic communities with public services, schools, clinics, and all that is needed for everyday life. They are replacing the impoverished houses of the barrios.

So, Venezuela’s Socialism of the 21 Century, is alive and well; it has faced formidable obstacles and has shown the world that it is a nation of heroic people who are determined to build their own future without being enslaved by capitalist nations or their corporations.

Venezuela will engage in market transactions, but it will not be duped nor its people abused. The world now wants Venezuela’s oil. Venezuela will sell it, but not its soul or its sovereignty.

[1] See: Centre for Economic Policy Research (CEPR) 2019 Report that reveals that there were 40,000 Venezuelan deaths in one year alone, 2017-18; See Orinoco Tribune, 10 Feb 2021 that reveals that the US Government Accountability Office (GAO) stated that thousands of Venezuelan deaths are due to US sanctions; See: Former UN Rapporteur on Human Rights Dr. Alfred De Zayas declare sanctions have killed more than 100,000 Venezuelans, Orinoco Tribune, 4 March 2020; See: CELAG, informs on the UN Report by Human Rights Rapporteur Alena Douhan who indicates the rise in the mortality rate in Venezuela is due to sanctions, https://www.celag.org/informe-de-la-onu-sobfre-el-empacto-de-las-sancines-a-venezuela

[3] Republican State senator Richard Black admitted that the USA was responsable for the attack on the bolívar:” We demonetized their currency and through the international banking system, we made the Venezuelan currency  worthless and the we go and say: Look, how bad this government is, your currency is worthless.” Well, it wasn’t them. It was us who made thier currency useless. (Sputnik, o9-12-2019)