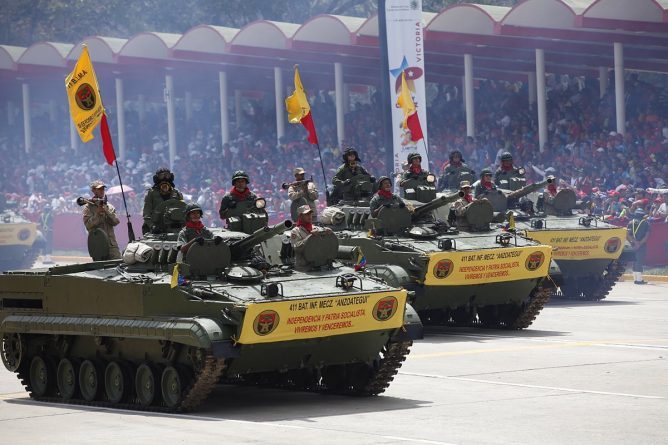 Here’s a message to Vice-President Piss, his freak family, Elliott Abrams and the rest of Washington: the Venezuelan military isn’t f*cking stupid.

Last weekend we saw an attempted coup in Venezuela by the US along with local lunatic/self-proclaimed “President” Juan Guaidó. This time, rather than just burning people alive in Caracas, the opposition started their stunt at the Colombian border.

The intent of this stunt was to highlight how the actual Venezuelan President, Nicolas Maduro refuses to let in “aid” from the United States. This is the same type of “aid” from the earlier stunt by the Trump regime that even the Red Cross and UN have called bullshit.

The plan this weekend was to give Maduro and ultimatum: either let in the aid, or the US will do something; although it’s still not clear what with even the bloated tumor Jair Bolsonaro of Brazil has said he’s not interested in any military operations launched from his country.

We all know that this coup attempt by the US and Guaidó failed because we all saw the anti-Maduro thugs on the Colombia-Venezuela border throw a tantrum when they realized their error. Once these CIA stooges realized the trucks of aid weren’t crossing the border they just decided to burn them and blame it on Maduro (which has also failed).

But why did it fail?

In the weeks leading up to the latest coup, multiple US officials spoke publicly (and privately) to members of the Venezuelan military urging them to turn on the Bolivarian Revolution. For the sake of simplifying this argument, let’s focus in particular on the promises made by the Vice President of the US, Mike Pence.

In his pre-coup address to the Venezuelan people, Pence practically begged the military to help the US overthrow – yet another – elected Latin American government. Pence and others such as Mike Pompeo even went so far as to promise any soldiers who defected a chance to ‘live in peace’ after Washington destroys their country if they would just let all the arms disguised as aid enter.

So why didn’t the soldiers do it?

Because, as I’ve already said, they’re not f*cking stupid. The Bolivarian Revolution was built from the ground up when the people of Venezuela (and Latin America as a whole), tired of the neoliberalism enforced by Washington since the 1970s and 80s rose up. In Venezuela, this came exactly 30 years ago with the riots know and the Caracazo.

Prior to the Caracazo, as many libertarian dumbasses will tell you, Venezuela was, in fact, one of the richest countries on the continent but what the free marketeers leave out is that they had massive amounts of poverty and an immoral wealth gap between the richest and poorest citizens. This poverty, the result of neoliberal privatization schemes, set off a chain of events that later helped spawn Venezuela’s communes and a young military leader who attempted to overthrow the crooked puppet state, Hugo Chavez.

The problem for Pence, Pompeo, Trump, Bolton, Abrams and the lot is that this military leader brought the military up with him as a liberatory force. On top of this, not only did Chávez secure the military’s loyalty because he was a military man himself, but also because, they too, had had enough domination from Wall Street.

This military, which is the same one helping Maduro protect Venezuela remembers this but they also remember other parts of history.

Another big reason the military likely won’t turn is that they know people like Pence are lying when they say anyone who supports Maduro, socialism, or even some forms of liberal democracy will never be allowed to live in peace if the US has their way.

Again, the reason they know this to be true is that they know revolutionary history. The Bolivarian military remembers what happened to other socialist movements around Latin America, the Middle East, Africa, and Asia once a US-backed anti-communist was in power. A lot of this history they know is still applicable since much of it was also perpetrated by people like Bolton and Abrams in their previous positions.

The Venezuelan military remembers things like Salvador Allende being fairly elected and then overthrown, or the Contras mass murdering civilians. They know that this type of behavior doesn’t end when the US wins. They know Pinochet threw labor leaders, socialists, and anyone who opposed his trash neoliberalism from helicopters after taking power. They know the Contras and other death squads were bayoneting toddlers to prove a point to scared farmers, often while not even actually engaging whatever force they were ostensibly fighting even a single time.

The Bolivarian Revolution and the “Pink Tide” that swept Latin America in the early 2000s were a response to all of this. The Venezuelan military knows there is no peace as long as there is ANY resistance to US financial tyranny. The US, all their intelligence agencies and their various stooges around the continent may have won some fights in countries like Brazil but this won’t be as easy on Venezuela. The Venezuelan military is part of the Bolivarian revolution, they will not be separated, and like the many of the average Venezuelans opposing US intervention, they know what comes next if Washington gets their way.