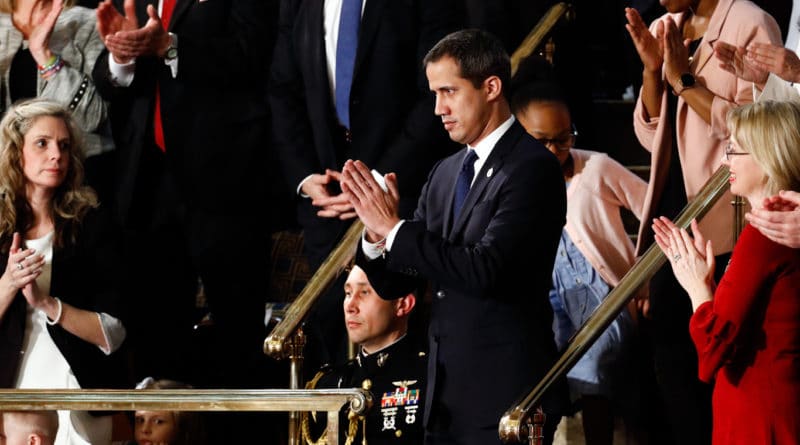 Perhaps the loudest applause heard during Trump’s State of the Union Address was reserved for Venezuala’s Juan Guaidó, as Democrats and Republicans rose as one to salute the self-declared president.

Donald Trump was in defiant mood at last night’s State of the Union Address in Washington, D.C., confident that he will be acquitted in the Senate impeachment trial today. While there is a great amount of talk that the United States is racked with partisan strife, when it comes to foreign policy, the parties are in near lockstep agreement. A case in point was the cheers from the audience as Trump announced that “we are once again standing up for freedom in our hemisphere” by “supporting the hopes of Cubans, Nicaraguans and Venezuelans.”

Pelosi claps as Trump calls Nicolas Maduro a socialist dictator, before giving a standing ovation as he introduces failed fascist coup leader Juan Guaido. The bipartisan agenda to topple socialism and destabilize the region in the name of big oil interests on full display pic.twitter.com/iDzK7iZBh8

“The United States is leading a 59 nation diplomatic coalition against the socialist dictator of Venezuela Nicolas Maduro. Maduro is an illegitimate ruler, a tyrant who brutalizes his people. But Maduro’s grip on tyranny will be smashed and broken,” Trump declared. He then turned to the gallery to announce that he had invited a “very brave man who carries with him the hopes dreams and aspirations of all Venezuelans” to be there, “The true and legitimate president of Venezuela Juan Guaidó.” Perhaps the loudest applause of the night was reserved for Guaidó, as Democrats and Republicans rose as one to salute the self-declared president. Leading the clapping was Democratic Speaker of the House of Representatives and liberal icon Nancy Pelosi. Pelosi was more enthusiastic even than Vice-President Mike Pence, beating him out of her seat to give Guaidó a standing ovation.

While showing very little disagreement with the president’s proclamations, she was still lauded in liberal circles for tearing up Trump’s speech at the end of the event, long after the president had refused to shake her hand. Immediately “Nancy the Ripper” became the trend of the night on social media, as messages of support flooded in for the supposedly brave action that spoke truth to power. On the other hand, conservatives were outraged at the gesture. “It was disgraceful. It was disgusting. I was sitting 50 feet away for her and it made me angry because what she showed and what congressional Democrats showed was contempt for America; that they won’t root for the American people and they won’t show even the barest modicum of respect for the American president,” roared Texas Senator Ted Cruz on Fox News.

Yet, despite the talk of resisting Trump, Pelosi and the Democratic establishment’s record shows they have done anything but that. In December 188 House Democrats joined the Republicans to push through Trump’s enormous military budget bill, including funding for his Space Force. Democratic resistance is often strongest when the president has made moves to de-escalate militarism and aggression across the world. Even those who position themselves on the left of the party are largely behind Trump on foreign policy. Massachusetts senator Elizabeth Warren, for instance, supported the Trump administration’s coup against leftist Bolivian leader Evo Morales and declared that she was “all for” sanctions against Maduro.

The U.S. sanctions against Venezuela have been condemned by the United Nations, which called on all member states to block them, noting that they have been designed to hit the poor and most vulnerable hardest. A recent study found that they killed at least 40,000 Venezuelans between 2017 and 2018 alone. Alfred de Zayas, an American U.N. Special Rapporteur, visited the country and declared the Trump administration guilty of crimes against humanity, comparing them to a medieval siege.

Establishment Democrats have no ideology or fixed political beliefs so the only thing that animates them with politics are things like Pelosi ripping up the speech or putting on her sunglasses or other symbolic gestures that are designed to mask the emptiness underneath.

One notable exception to the State of the Union echo chamber was Michigan’s Rashida Tlaib, who walked out of the event unable to stand “the lies, the bigotry and the shameless bragging.” Matt Duss, foreign policy advisor to Bernie Sanders, summed up the carnival, “Pelosi applauded some truly awful portions of the speech but at least she gave you suckers a good gif at the end,” he wrote. However, he appeared to oppose Trump’s actions in Latin America only on the grounds that it was giving Russia a bigger foothold in the hemisphere, rather than for any ethical considerations.

Virtually unknown both inside and outside Venezuela until a year ago, Guaidó came to prominence in January 2019 after declaring himself president. He attempted four unsuccessful coups against the elected government of Nicolas Maduro, all with U.S. backing, the last of which went so poorly few people noticed it. Over the past year, his domestic support has declined after a series of scandals, including public drunkenness and accusations of embezzling over $90 million in U.S. taxpayer money. Guaidó had promised Pence that he had the support of at least 50 percent of the Venezuelan armed forces, getting the vice president to agree to support a coup. But when the time came, no one defected. Guaidó fled the country, going on a world tour to try to drum up support for his cause. His co-perpetrators escaped to the United States where they assumed they would be treated well. Instead, they have spent over nine months incarcerated in an ICE concentration camp for illegally crossing the border. In an interview with Telemundo, one of their leaders claimed that Guaidó had abandoned them.

In January, as Guaido was also dropped by the coalition of domestic opposition parties, he staged a publicity stunt where he climbed over the fence of the National Assembly, claiming he had been locked out. The U.S. subsequently sanctioned his political partners for turning against him. The White House announced that Trump would meet him for an official visit today.

A key topic of the State of the Union Address was the economy, with the president claiming there had been a “blue collar boom” thanks to his administration, with working-class Americans experiencing a new golden age. Trump also awarded the Presidential Medal of Freedom to conservative radio host Rush Limbaugh, who revealed this week he has stage four lung cancer. Ironically, because of Trump’s sanctions against the island, Limbaugh is unable to legally travel to Cuba, where they have developed a vaccine against the disease.