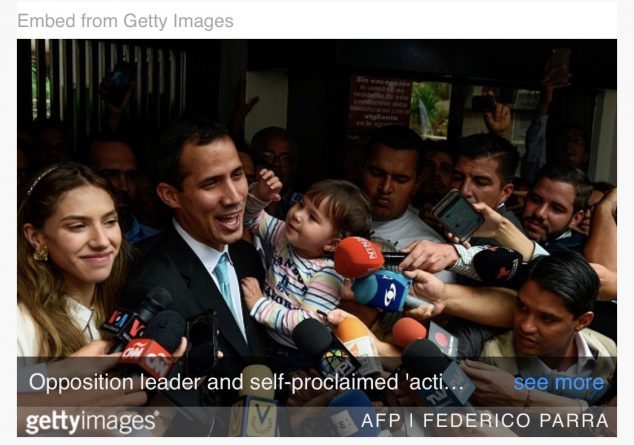 The Venezuela coup attempt is not going well at all and Washington’s global allies may soon regret rushing to recognize Juan Guaido as the legitimate interim president of Venezuela, French journalist and geopolitical analyst Gilbert Mercier told Sputnik.

Make no mistake, the so called Venezuela crisis has been engineered through economic sanctions and plotted in Washington for many years, Gilbert Mercier, a French journalist, geopolitical analyst, and editor-in-chief of the News Junkie Post, told Sputnik.

“I cannot foresee that the US imperial push against Maduro will be successful either as long as Venezuela’s military remains loyal to him, and as long as Maduro consolidate both his regional and global support,” the journalist said, adding that the Venezuelan legitimate head of state “should emulate the survival tactics of the Cuban revolution through striking the right alliances, and numerous improvements of his economic management of Venezuela’s socialist society”.

He remarked that “after all the Castros, first Fidel than Raul, defied US imperialism for six decades”.

“In what must be called, as I did some time ago, a new Cold War, Venezuela is the major geopolitical test of our times. It might be even more critical than Syria, because this time around it is a conflict between imperial capitalism and a socialist state,” Mercier opined.

“So far the US sponsored coup to replace legitimately elected Nicolas Maduro by Washington groomed Juan Guaido has not progressed as planned,” the geopolitical analyst pointed out. “As matter of fact, as we stand, it is a fiasco, and US vassals in Europe and the Americas could soon regret their premature enthusiasm to embrace Washington’s regime change policy”.

On 23 January, Juan Guaido, the president of the disempowered National Assembly declared himself the interim president of Venezuela. His move was immediately endorsed by the US which triggered a domino effect among Washington’s allies, with Canada and eleven Latin American states following suit.
On 31 January, the European Parliament (EP) recognized Guaido “the only legitimate interim president of the country” which was followed by a joint declaration signed by 19 EU states that “acknowledges and supports” Guaido as “president ad interim of Venezuela”. On 19 February Japan joined the chorus of Guaido supporters.

“The United States, like any empires, has vassals and client states which they control through various organisations such as NATO or the OAS,” the analyst elaborated. “This is what the anti-Maduro coalition is about. When the Empire’s Diktats encounter resistance from vassals, it uses different level of coercion to get to the bottom of it. It is summarised by the “with or against us” US imperial litmus test. The very same allegiance test was, by the way, used in the build up to the invasion of Iraq in 2003″.

In contrast, Russia, China, Mexico, Cuba, Nicaragua, Turkey and many other countries have thrown their weight behind the legitimately elected president of Venezuela, Nicolas Maduro.

Meanwhile, a report by the prestigious Research Services division of Germany’s Bundestag found that there were “strong” legal reasons to consider the recognition of Guaido as interim president as “interference” in the Latin American country’s internal affairs.

Trump is ‘Frustrated and Impatient’ Over Stalled Coup Attempt

Judging from Donald Trump’s harsh statements and threats, it appears that “the coup attempt has stalled and is not going well at all”, Mercier emphasized.

“President Trump, himself, is showing his frustration and impatience,” he opined. “Last Monday, while he was in Miami, Florida, Trump delivered a speech to threaten Venezuela’s military. Trump said that Venezuela’s military would ‘lose everything by remaining loyal to Maduro’, and not allowing the so called US humanitarian aid for Venezuelans stockpiled at the border of Columbia and Venezuela”.
“As matter of fact, the Trump administration, and US imperialism’s little helper in Venezuela Juan Guaido, has given Maduro an absurdly artificial deadline to let the US aid in the country: it is 23 February,” Mercier noted.
According to the French journalist, “this stratagem completely falls into the humanitarian imperialism playbook”.

“First you starve people through drastic sanctions, then you pretend to have compassion and send food and medical supplies,” he said. “My partner at News Junkie Post, Dady Chery, actually was the first one worldwide to identify this strategy, which she coined in 2015 as Humanitarian Imperialism: Aid as a Trojan Horse.”

Mercier stressed that the US humanitarian aid is by no means “about feeding the people of Venezuela”, rather, “It is about trying to get Venezuela’s military to either cave in to the request or become divided”.

Commenting on the issue on 20 February, Russian Foreign Minister Sergei Lavrov denounced Washington’s threats to Venezuela’s military as a violation of the United Nations Charter and “direct interference in the internal affairs of an independent country”.

Still, “both Chavez and Maduro have a partial responsibility in Venezuela’s less than stellar economic performance”, Mercier believes.

“It is of course a failure to efficiently exploit the country vast oil reserves, but actually, more importantly the lack of diversification notably in terms of exploiting Venezuela’s rich agricultural potential,” he said. “In other words, Venezuela, despite the US sanctions, should be a prosperous country, and let’s face it, it is not. Maduro and his team, to survive and make Venezuela’s brand of socialism not only a workable proposition but a thriving one, must diligently improve on this”.

However, he emphasized that despite the dire economic situation, “Maduro still has his core support within most of the population intact”.

“Venezuela’s elite, needless to say a minority, had been opposed to Chavez, and his heir Maduro, for more than twenty years, this has remained, and many of them have actually immigrated to the United States,” the French journalist said.

Why Trump Won’t Send US Troops to Venezuela

Nevertheless, the geopolitical analyst cast doubt on the possibility of the US launching a military option against Caracas.

“After the recent military humiliations both in Afghanistan and Syria, which are de-facto defeats but spun in Washington respectively as ‘negotiations with the Taliban‘ in the first case and “victory on ISIS [Daesh]” in Syria’s case, I do not think that the United States and NATO partners have much appetite for direct ‘boots on the ground’ military adventures. Venezuela shall not be an exception,” Mercier opined.
At the same time, he did not rule out a potential proxy operation.
“In the unfortunate eventuality, which I am sure is seriously considered by the Pentagon and the CIA, of using proxy agents to engage Venezuela’s military and powerful Chavista militia, the prime candidate are right-wing regimes of Columbia and Brazil with a covert logistic support of US special forces/CIA field operatives, and also the powerful mercenary outlet of Erik Prince (formerly Blackwater),” the journalist suggested.

Mercier warned that “this proxy war scenario would be a disaster for Venezuela and the region”, stressing that “if Venezuela’s military stay loyal to Maduro, it is regardless doomed to fail”.

*Daesh (ISIS/ISIL/Islamic State) and the Taliban are terrorist groups banned in Russia.

Gilbert Mercier is a French journalist, geopolitical analyst, editor-in-chief of the News Junkie Post and the author of “The Orwellian Empire”.