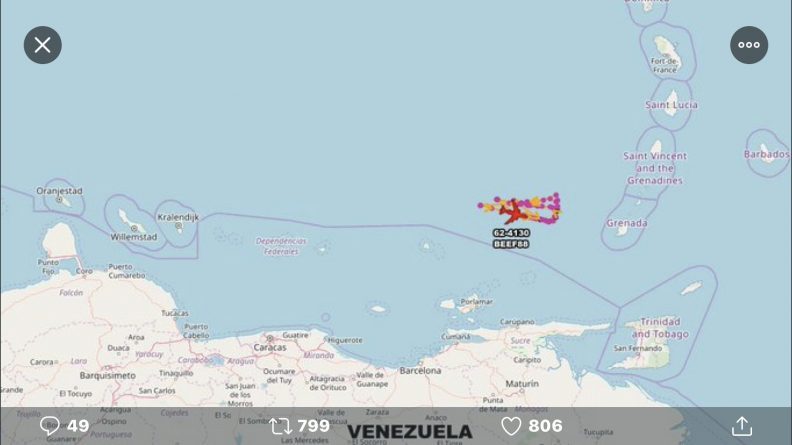 A ship that departed from Puerto Rico to Venezuela with the so called “humanitarian aid” that the United States Government intends to impose on Venezuela, went back due to the strong defense of our sovereignty  made by the Venezuelan Navy.

The pro-gringo journalist Mariana Reyes confirmed the information through her Twitter account. “The boat with ‘humanitarian aid’ turns back after being threatened with fire by Venezuelan Army”, she said, according to the Venezuelan portal La IguanaTV. OT tried to verify the source but couldn’t find a tweet from this journalist but we found a retweet from another account referring to it. That make us believe she erased her tweet. For its part, the governor of the Caribbean island, Ricardo Roselló, expressed through a statement that the event was “notified to the federal government.”

In parallel yesterday, February 23, OT received reports of a US surveillance plane (USAF RC-135W 62-4130 BEEF88) flying close to the maritime border of Venezuela. The information is posted on the twitter account @AircraftSpots with clear levels of detail as you can se below.

OT visited the twitter account yesterday night and “liked” the post and today in the morning while preparing this piece we couldn’t reach it receiving the following message: ” you are blocked from following @AircraftSpots and viewing @AircraftSpots’s Tweets”. Be warned.

You have a photo here in the case they erased the post: Yesterday the chavistas all over Venezuela along with the law enforcement and the government, rejected the US aggression but they are going to keep trying so the message from President Nicolas Maduro is to stay alert.