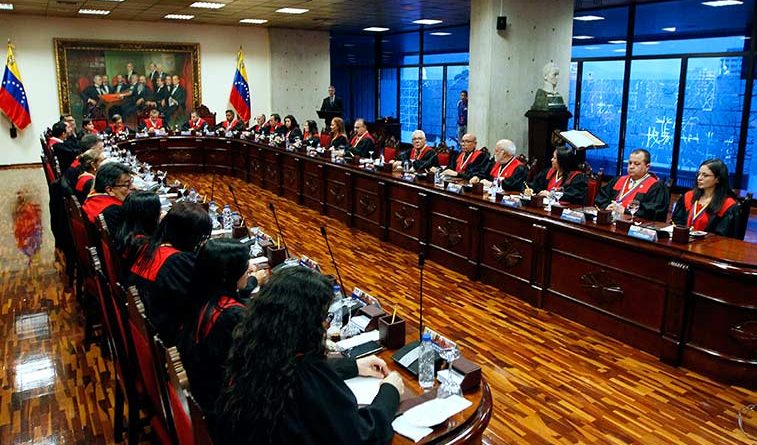 Through a statement, the Supreme Court of Justice (TSJ) decided to evaluate the responsibility of three deputies, José Guerra, Tomás Guanipa y Juan Pablo García, “in the blatant commission of crimes”, including treason to the Fatherland, conspiracy, instigation to insurrection, civil rebellion, concert to commit crime, usurpation of functions, public instigation to disobey laws and continued hatred.
According to the statement, the request for investigation was made by the Attorney General of the Republic and the decision was taken by the TSJ Full Chamber. It also states that “it is ordered to send a certified copy of the sentences to the Attorney General of the Republic, Dr. Tarek William Saab, to continue the processing of the corresponding criminal case.”
For its part, the National Constituent Assembly (ANC) debated on Monday lifting the parliamentary immunity of these three deputies of the National Assembly mentioned above.

RELATED CONTENT: President Maduro: Venezuela is Out of Norway Talks (+Trump Blockade Effects)
With this order, there are already 17 deputies of the AN that got their parliamentary immunity lifted for their alleged responsibility in the violent actions and attacks against the nation so far this year. Between January and May, the deputies Juan Guaidó, Edgar Zambrano, Luis Florido, Henry Ramos Allup, Richard Blanco, Marianella Magallanes, Simón Calzadilla, Américo Di Grazia, Sergio Vergara, Freddy Superlano, Juan Andrés Mejías, Miguel Pizarro, Carlos Paparoni and substitutes Franco Casella and Winston Flores.
Below the full text:

The Supreme Court of Justice (TSJ) before the request made by the Attorney General of the Republic, decided by judgments of the Full Chamber that the facts subject to the petition compromise the responsibility of the citizen Juan Pablo García Canales, in the blatant commission of the crimes of “Treason to the Fatherland, Conspiracy, Instigation to the Insurrection, Civil Rebellion, Conspiracy, Usurpation of Functions, Public Instigation to the disobedience of the laws and the continued hatred, foreseen and sanctioned in the articles 128, 132, 143 , 145, 163, 213, 285, all of the Criminal Code, respectively and Association (to commit crimes), provided for and sanctioned in article 37 of the Organic Law Against Organized Crime and Terrorism Financing “; Likewise, of the citizens José Ángel Guerra Brito and Tomás Guanipa Villalobos, for the same crimes.

RELATED CONTENT: International Day of Action to Protest the Increased US Blockade of Venezuela (+Reloaded)
The decisions of the Full Chamber – one with a presentation by Judge Marco Antonio Medina Salas, Vice President of the Administrative Political Chamber and the other by Judge Yanina Karabín de Díaz, a member of the Criminal Cassation Chamber – order to send a certified copy of the proceedings to the President of the National Constituent Assembly for said body to determine the conduct, as provided in article 200 of the Constitution of the Bolivarian Republic of Venezuela and the Constitutional Chamber of the High Court, for its knowledge and other purposes.
They indicate the judgments that in the present procedure, since it is the blatant commission of common crimes, in accordance with the decision in decision No. 1684 of November 4, 2008, issued by the Constitutional Chamber of the High Court, the prejudice of merit of the aforementioned citizens, because of which their prosecution corresponds to the ordinary courts in criminal matters, according to the provisions of article 378 of the Organic Code of Criminal Procedure.
Likewise, it is ordered that a certified copy of the sentences be sent to the Attorney General of the Republic, Dr. Tarek William Saab, to continue the processing of the corresponding criminal case, observing the due process guarantees and constitutional rights provided for in the Organic Code. Criminal Procedure, the Constitution of the Bolivarian Republic of Venezuela, the laws, treaties, conventions and international agreements signed and ratified by the Republic.