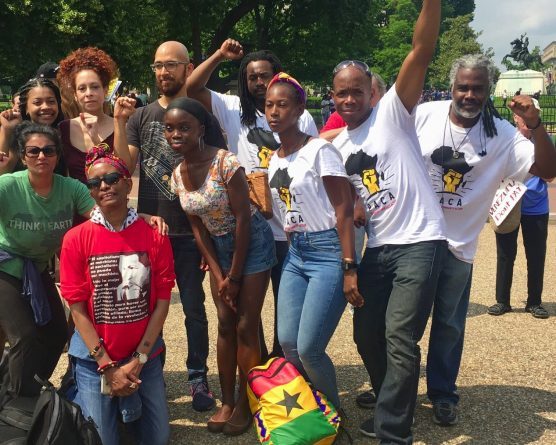 Yesterday, our folks were out in the streets of Washington, D.C., to oppose the U.S. intervention in Venezuela. Watch a video encapsulating the day. It features Black Alliance for Peace member Asantewaa Mawusi Nkrumah-Ture and Netfa Freeman of Pan-African Community Action, a BAP member organization. They both spoke about how the struggle against U.S. intervention in Venezuela is connected to the global struggle for African liberation. Then check out our photos.

Yesterday’s action was especially important after the final four members of the Embassy Protection Collective were arrested Thursday on a Class A misdemeanor charge called “interfering with a federal law enforcement agent engaged in protective functions.” This dubious charge carries a maximum penalty of one year in prison and a $1,000 fine. Folks, notice the state didn’t try to charge activists with “trespassing.” That would have been a losing case!

The momentum generated by the Reverend Jesse Jackson showing up and successfully delivering food and supplies to the collective was clearly too much for the state. Watch the video featuring Rev. Jackson and BAP National Organizer Ajamu Baraka, who were accompanied by BAP Coordinating Committee members Netfa Freeman and Paul Pumphrey.

According to Margaret Flowers, one of the activists who was illegally arrested, the state knocked down the embassy’s rear door on Thursday with a battering ram. Once inside, officers were visibly ashamed when activists told them they were taking the unprecedented step in U.S. history of violating a foreign embassy and that their action could escalate toward an all-out military-to-military war between the United States and Venezuela. Clearly, other countries would see the need to get involved, turning it into a world war.

It is because of the high possibility of war that would disproportionately affect Black and Brown Venezuelans that BAP felt the need to issue an official statement on the matter.

Africans around the world will commemorate African Liberation Day on May 25. Please read a statement BAP released last year that provides context about this day.

Our folks are being threatened all over, including in Colombia, where African/Black social leaders must be protected by armed guards in order to avoid tragedy, as they did a few weeks ago. Activist Angela Davis writes in solidarity.

Check out the statement released May 2 by the U.S. contingent of the 14th May Day Brigade at the International Meeting of Solidarity at the Convention Center in Havana City, Cuba. BAP member organization Pan-African Community Action participated in this group. The statement also can be heard here. The U.S. contingent reflects “these last gasps of the empire depend on maintaining our alienation, exploitation, oppression and genocide.”

Finally, we invite you to listen to an interview on “By Any Means Necessary” featuring BAP members Netfa Freeman and Jacqueline Luqman. Then read articles on the latest developments in the U.S. war on African/Black people written by Ajamu Baraka and BAP Coordinating Committee member Margaret Kimberley.