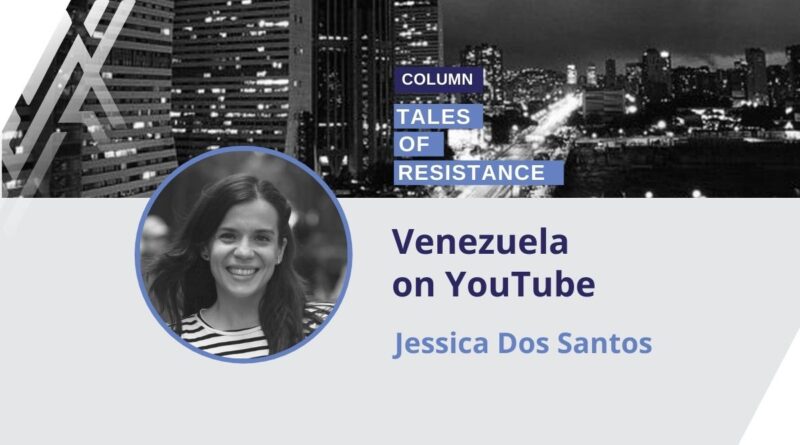 Jessica Dos Santos argues that positive reviews from celebrities and YouTubers should not fuel illusions about Venezuelan reality.

In recent weeks, social media in Venezuela has been “on fire” because a number of artists and influencers, some foreign and some Venezuelan, declared that the country’s situation has “improved dramatically” in the past few years.

Venezuelan actress Norkys Batista was behind one of the most controversial episodes when she returned to the country after a year abroad and said Caracas is “looking pretty.” For his part, youtuber Luisito Comunica, who had a traumatic experience in Venezuela in his first visit in 2017, returned a few weeks ago and claimed that “the country has changed for the better in a number of ways.” He even bought himself a 20 thousand-dollar house in Lechería, a very high-end area in the east of the country.

“I look at them and ask myself: what’s behind this? I find it suspicious, I’m very skeptical of these things,” high-ranking Chavista politician Diosdado Cabello wondered in his TV show. He suggested it could be an imperialist ploy. After years in which talking rubbish about Venezuela was second nature for celebrities, hearing praise can be weird. Nevertheless, Cabello did not waste the chance to poke fun at opposition pundits who “go crazy” and “start cursing” at whoever dares say good things about Venezuela.

True to form, the opposition has spewed its hate at these characters. Some, like well-known and hardline journalist Patricia Poleo, affirmed that by praising the country these youtubers end up hurting “Venezuelans when they come knocking in the US.” According to Poleo, they could face an immigration officer showing them the videos to prove everything is fine in Venezuela and they should go back.

On this topic there is plenty to be said. Venezuela is not the country it was four or five years ago. Every country, under normal circumstances, would undergo changes in such a short time. Now imagine one trying to survive amidst a crushing US blockade while essaying a variety of economic programs.

For one, Venezuela is no longer facing widespread shortages. Gone are the empty supermarket shelves and the long queues to purchase basic goods. In fact, with so-called bodegones selling imported products, we’re seeing brands that had never been seen here. Now we have to sweat it to earn enough to purchase overpriced goods. While it is a relief that stuff like medicines or hygiene products are available, in truth we’ve swapped shortages for a very unreachable plenty.

Needless to say, a Venezuelan actress who spends most of her time in the US and a high-profile Mexican youtuber are not familiar with our struggles to put food on the table. For them, “prices are not so high.” To state that “things in Venezuela cost as much as anywhere else” overlooks the fact that salaries are among the lowest in the world and people often need to work two, three or even four jobs to make ends meet.

We’ve gone through an economic transition that has triggered rising inequality.

Another story that caught a lot of attention was the arrival of a Russian tourist contingent to the island of Margarita. On the one hand, that’s good: they can enjoy this beautiful country, they can spend money and boost commercial activities. The flip side is that many Venezuelans have to face the fact that “exclusive” destinations like Margarita, which at one point was accessible for a large chunk of the population, are now completely out of reach.

Moreover, for youtubers it’s wonderful that there are no more cash shortages because the country is very much dollarized. But for those of us who live here it is not so easy: many people are paid in bolívares only to be charged for rent, medical appointments, repairs, etc., in US dollars. Others are lucky enough to work for foreign clients, but thanks to the US blockade they have to jump through a million hoops to get paid. Furthermore, the amount of cash that circulates is very limited, which gives retailers the perfect excuse not to give change.

Does speaking about the changes the country has gone through make life harder for Venezuelans who want to lie to US authorities about being victims of political persecution? Well, tough luck.

Nevertheless, these changes need to be put in context. Very often we’re talking about ways in which society adapts in order to survive (like de facto dollarization). We likewise shouldn’t lose sight that authorities are making decisions (like lifting price controls) with very little room to maneuver, without downplaying the fact that there are powerful sectors reaping the benefits.

As for recent government actions some of them, such as bringing medicines or fuel from Iran, have been life-saving. Others are more questionable, like reopening at least 30 casinos, undoing Hugo Chávez’s ban some 10 years ago. Casinos were “the bourgeoisie’s den of perdition,” the former president used to say.

RELATED CONTENT: Is the End of the Blockade Against Venezuela Here?

The most committed loyalists will argue that policies such as this [reopening casinos] allow the government to boost its income through taxes. At the same time, more skeptical Chavistas say that these spaces are geared towards a “new rich” sector, full of expensive tastes and which has grown very visible as high-end goods and the use of US dollars has become more common.

All in all, this move is probably another symptom of the liberal turn the Maduro government has taken when facing the worst economic crisis in the country’s recent history. All this has mainly been a result of a dramatic fall in oil revenues as production has come crashing down under the weight of brutal US sanctions.

Nonetheless, when all is said and done, we should not go from one extreme — where the “catastrophe” was taken out of proportion to lobby for foreign intervention — to another where everything is “fine” because a youtuber bought a cute house on the beach. When it comes to Venezuela, no 15-minute video will be enough to grasp reality. Still, we appreciate the effort.

Jessica Dos Santos is a Venezuelan university professor, journalist and writer whose work has appeared in outlets such as RT, Épale CCS magazine and Investig’Action. She is the author of the book “Caracas en Alpargatas” (2018). She’s won the Aníbal Nazoa Journalism Prize in 2014 and received honorable mentions in the Simón Bolívar National Journalism prize in 2016 and 2018.