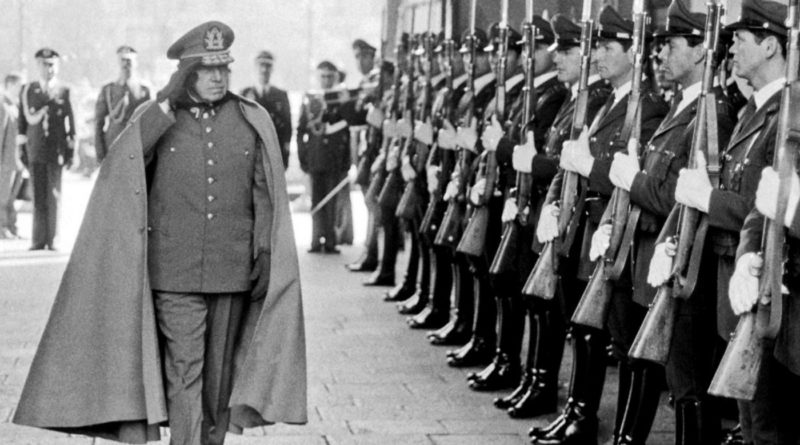 The reason why Pinochet’s regime tortured and killed tens of thousands of people, and why Pinochet’s far-right modern admirers glorify his actions, has to do with the psychology of power. Namely, the desire of the powerful to assert their power over the dominated group. When it’s in the context of the powerful stamping down a rebellion from the underclass, this desire to enact violence and cruelty in order to maintain one’s own control is especially strong.

So it’s no coincidence that Pinochet had the mission of suppressing a potential lower class revolt. His regime came to power after the CIA ousted Chile’s democratically elected socialist president Salvador Allende, and Pinochet and his “Chicago Boys” had the task of proliferating neoliberal policies despite the broad popular opposition that these policies were naturally met with. As Margaret Thatcher said about why the global capitalist class embraced neoliberalism, “there is no alternative”-if these radical austerity and privatization measures weren’t carried out, the recession of the 70s would keep making capitalist profits drop, and the whole system would potentially fall apart. If the ruling class wanted to keep their power, neoliberalism would have to be realized by any means necessary.

By the judgment of Pinochet and his supporters in the neoliberal and imperialist elite, the things that his regime’s victims endured were merely the cost of making this task to preserve the power structure succeed. Neoliberal economist Friedrich Hayek said about Pinochet that it’s possible for a “dictator to govern in a liberal way,” and that he preferred a “liberal dictator” to “a democratic government lacking liberalism.” Henry Kissinger said about Pinochet’s regime that “I think we should understand our policy — that however unpleasant they act, the government is better for us than Allende was. So we shouldn’t support moves against them by seemingly disassociating.”

It’s important to understand exactly which actions these figures were condoning. Lux de las Nieves Ayress Moreno, one of the people who was arrested by Pinochet’s police for actively opposing the regime, wrote about her experiences:

I was in various detention centers but the one I remember most was called Tejas Verdes…This is how Pinochet tortured me: they took me prisoner with my father and my fifteen year-old brother Tato…it was an impressive operation [and] they took us to a house where the Military Intelligence Service was stationed…they threw me on the floor covered with water and applied electric shot to my entire body, but especially the breasts, vagina, anus, eyes, mouth, and neck…then they called my father and began to torture him in front of me so that I would speak, all the while beating me…then they called my brother and did that same to him…they pulled my nipples and made cuts with knives and razors. They violated my vagina with their filthy hands, bottles, fingers, sticks, things made out of metal, and then again, with electric shocks. They took me out and pretended to shoot me. Along with a woman who was five months pregnant, I was one of the most tortured prisoners in Tejas Verdes…I was left for dead. I believe many people were killed in Tejas Verdes, but I do not know how many, or their names; I was always unable to communicate.

Since then, the U.S. has sought to disassociate itself from Pinochet’s atrocities while at the same time regularly carrying out violence of a similar degree. The Bush White House expressed sympathy for Pinochet’s victims, yet it created a torture program that consisted of waterboarding, electrically shocking men’s genitals, and even worse things; Fatima Boudchar has written about her experience in one of the CIA’s black sites: “Some of what they did to me in that prison was so awful I can’t talk about it. They hit me in the abdomen just where the baby was. To move me, they bound me to a stretcher from head to toe, like a mummy. I was sure I would shortly be killed.”

Practices like waterboarding have since been defended by Dick Cheney, and infamously by right-wing Wall Street Journal columnist Bret Stephens. And the most extreme acts of physical punishment on prisoners during the War on Terror have been implicitly forgiven by the Washington establishment. Gina Haspel, who ran one of the black sites that performed the kinds of atrocities Boudchar described, has since been made CIA director by the Trump White House. Trump has also made Marshall Billingslea the Assistant Secretary for Terrorist Financing in the U.S. Department of the Treasury, even though Billingslea facilitated the human rights abuses from the Bush era.

Just like invading countries to advance corporate profits, incarcerating millions of people for the benefit of the prison-industrial complex, or killing people of color to strengthen the police state, torture serves a function for the capitalist class: to quell opposition. The introduction of torture into U.S. counter-terrorism policy since 9/11 has created an implicit threat towards political actors who the state might decide to deem “terrorists.” This has become apparent from the torture that whistleblower Julian Assange has received while being imprisoned in Belmarsh, the British version of Guantanamo.

As the empire loses its grip over the globe, and as capitalism now undergoes its worst crisis in the last century, Pinochet’s methods will keep looking more appealing to the ruling class. Operation Condor, the U.S.-backed campaign of political repression throughout Latin America that Pinochet’s regime contributed to, is now being repeated as Washington steps up its attacks against the Latin American left; the genocidal U.S. sanctions against Venezuela, the recent U.S. coup in Bolivia that’s resulted in ethnic cleansing against indigenous people, and last year’s violent U.S.-backed repression against protesters from neoliberal states like Chile and Ecuador all represent the growing reaction to class struggle.

The Bolivian coup regime’s creation of legally impune death squads, killings of critical journalists, and torture of those who’ve sought to expose its crimes forshadow how capitalist “democracies” like the U.S. will wage class warfare against the poor in the coming years. The imperialist veneer of freedom and justice, which has been largely abandoned amid the War on Terror and the brutal repression against recent protests, will disappear completely. What will be left is a campaign of horrendous barbarism, sold under the deceptive rhetoric that Henry Kissinger used in an article from this year: “The world’s democracies need to defend and sustain their Enlightenment values…(and) safeguard the principles of the liberal world order.”

For the Trump government whose policies Kissinger has himself helped guide, this task has so far meant shooting protesters’ eyes out of their sockets, using police to attack journalists at protests, and using curfews as weapons to enact violence against peaceful protesters. The militarization of police, erosion of liberties, and increase of rights abuses that’s occurring throughout the capitalist world shows how this ruling class reaction extends far beyond America.

The slide into dictatorship which is occurring in fascist-run countries like Modi’s India and Bolsonaro’s Brazil, and that’s already reached its conclusion in Orban’s Hungary, reveals how easy it’s been for many more Pinochets to rise during late-stage capitalism. All it’s taken is a series of destabilizing developments-9/11, the two great economic collapses of the last twelve years, the global environmental crisis-that have made made dictatorship look like a better option for the ruling class.