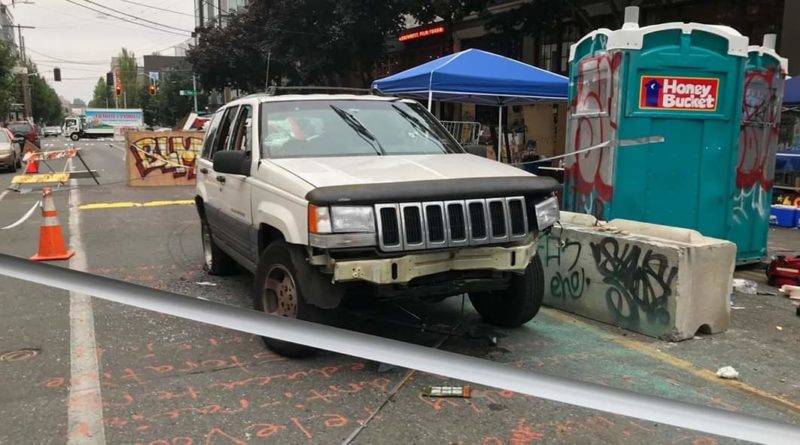 Saturday night, Mayor Jenny Durkan announced via the press that CHOP barriers would be removed Sunday morning. Nothing happened to the barriers and the press wondered why. By Sunday evening, nothing happened during two marches in different parts of Seattle, one of which marched to the Mayor’s home.

My father Paul Lehto, who is a legal expert with experience in social movements, has been monitoring media coverage and suggested a hotel room for us a few blocks away from the CHOP, specifically so I could be on the scene overnight. I got some sleep from 5 pm to about midnight. Paul told me that the public statements of militia organizations threatening a violent retaking of the CHOP on July 4th together with police statements meant there would be something happening Sunday night.

When I was less than a block away, Monday morning at around 2:45 AM, there were multiple attacks on the CHOP each coming from outside the CHOP. I heard at least three shots and saw a white Jeep Cherokee burning rubber. People were running both toward and away from where shots were fired. A group of us sheltered in a first floor apartment.

One teenager died as a result of the attack and one boy was hospitalized. Police Chief Carmen Best responded to the attack with an interview at the CHOP. When I was informed that she was having her interview at around 9:15, I walked down the street and found that she had already left. Around the same time, a news media vehicle was stopped by protesters for bumping into a protester. After the vehicle attempted to leave, a man was pushed several feet by the vehicle. The man was interested in pressing charges.

The perspective inside the CHOP is quite different from media coverage and police statements. Communication between police and protesters has become rare. Police claim that the dead youth and wounded boy were presumably occupants of the abandoned Jeep Cherokee. However, CHOP protesters have countered this claim. In multiple interviews, several have come forward and said violence and deaths at the CHOP are not performed by occupants of the CHOP, but rather by outside agitators.

I asked my father why he wanted to spend money on a hotel room for the night. After all, there hadn’t been any violence in almost a week. “Think of the police and the right wing militia groups as one entity,” he said. “By saying they’re going to take down barriers and then not doing so is a signal to the outside agitators to take matters into their own hands. The police’s central complaint is that they cannot do anything because their hands are tied, so they let the vigilantes do it for them. They don’t truly investigate and they don’t release any names of any suspects. Whether or not the police are intentionally signaling, the right wing groups interpret those statements as signals and then they take action.”

He later added, “It is open season for anybody to attack the CHOP because the police deliberately withdrew from the east precinct and from patrolling in most of Seattle yet, they nevertheless point to the occupation of the east precinct as a big problem enough so that Trump threatened to bring in the military. This was a tactical retreat to put the protesters in a place where they can be crushed – which is what the police have wanted to do all along to the anti-police brutality community and movement.”

CHOP organizers maintained that they feel safe at the CHOP, but they demand that what they call “police tyranny” must stop. In the same informal press conference, a CHOP organizer said, “You and the media say you are showing up for Black Lives Matter, but the only time you show up is for black bodies.” The CHOP perspective is that there has been a whole lot of ordinance shot at these people by both police and vigilantes and it has always come from outside the CHOP and it is always directed at the CHOP. The central problem with media coverage is the claim that conflicts are caused by the CHOP rather than stating the truth — that the violence is being directed at the CHOP.