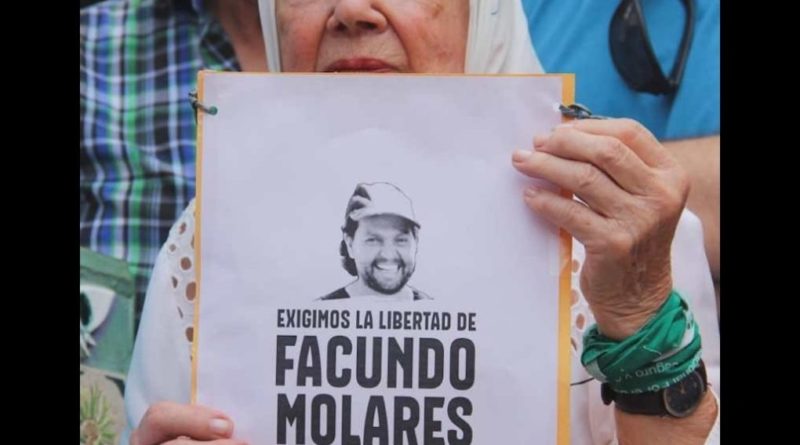 “Mr. President, I respectfully ask you to take steps to repatriate my son, who was unjustly imprisoned in an arbitrary case that is politically motivated and has no evidence against him,” says the letter that Hugo Molares sent to Argentine President Alberto Fernández. Molares is the father of Facundo Molares Schoenfeld, a photojournalist who has been detained in Bolivia since November 29, when the coup d’état against Evo Morales took place while he was working there for an Argentinean magazine. Facundo, moreover, is in very poor health and his family fears for his life in the midst of the coronavirus pandemic. “He must be repatriated urgently to be treated,” states the letter to the President, signed by human rights organizations, unions and people from the political and cultural spheres. In addition, Pope Francisco requested reports on the situation of the photographer from the bishop of the city of El Alto, where the prison he is being held in is located.

As told by this newspaper, the photojournalist had arrived in Santa Cruz de la Sierra to cover the elections in October last year and was admitted to the Japanese hospital in that city on November 11 due to kidney failure. On the 12th his father travelled to look for him and, once he identified Facundo, he was arrested together with his traveling partner in a police station where they were detained for 25 hours. In the letter sent to the President, Hugo remembers that “when I was kidnapped at the Monteros police station for the sole crime of having gone to see my son who was in intensive care in a state of induced coma, with respiration therapy and probes, I had to endure the interrogating officer mocking me with a grimace reminding me that in my country the president was Macri, and that I should expect nothing, no help, no assistance from him”.

In a dialogue with PáginaI12, Molares also remembers that that night, from his cell, he was able to hear various atrocities of the coup that was beginning that week in Bolivia. “My cell was near the entrance, so through a small window I could hear everything that was being said. That morning, three groups of policemen went in and came out with three dead people.”

RELATED CONTENT Up Against the Clock, The Bolivian Dictatorship Does Not Lose its Fascist Essence

Hugo and his wife were released under threat of death on the 14th in the early morning, but Facundo, on December 6, and without a warrant, was taken to the Chonchocoro prison – one of the most dangerous in Bolivia – where he is still being held in custody for his alleged participation in the blocking of a bridge. “They told me it was good for me to leave Bolivia because if we stayed they would kill us,” recalled the father.

As he explains in the brief, his son “was subjected to a parody of a hearing, violating all his rights, especially that of legitimate defense, appointing a public defender on the same day as the hearing, in the presence of three prosecutors and five lawyers for the plaintiff in a case that had begun fifteen days earlier in which Facundo was not even mentioned”.

“From that figurative audience, where in addition a journalistic show was conducted that showed him in a denigrating way half-naked in a wheelchair, convalescing from intensive therapy and still under the effects of drugs that prevented him from standing upright, he condemned to preventive detention, violating his most elementary human rights,” Molares adds in the letter.

With regard to Facundo’s health at the moment, his father commented that “although his mental state is stable, his physical health is not good”. “After much effort and through the efforts of the lawyer, human rights organizations and the consulate, we were able to get his medical situation in Chonchocoro reviewed and the prison doctor said he needed urgent attention and a medical and ophthalmological check-up, because he has almost completely lost the sight in his right eye,” he said. However, these studies are still pending and the prison authorities do not want to carry them out.

RELATED CONTENT The Death of Journalist Sebastián Moro: “He is a Victim of the Coup in Bolivia”

The photojournalist’s family has received expressions of solidarity and support from all over the world. The Inter-American Commission on Human Rights for example, questioned the Bolivian authorities requesting information on Facundo’s situation and the Committee of International Solidarity and Struggle for Peace has issued more than one request for his freedom and repatriation. Various national human rights organizations have also expressed their solidarity, such as Abuelas de Plaza de Mayo, APDH, HIJOS, among others.

But, in addition, Pope Francis “is also concerned and aware of the situation,” said Molares. This week the family received in Trevelin, the Patagonian city where they live, the bishop of the city of Esquel who brought them a letter from his peer from El Alto, Bolivia, where the Chonchocoro prison is located, explaining that the Pope had requested a report on the specific situation of Facundo.

“In addition to being Facundo’s father, I am a lawyer and I can say that he is a political prisoner who is being used by the de facto government as a hostage”, explained Molares, who is serves as a Justice of the Peace in Trevelin.

He went on to explain that “Facundo is in Chonchocoro the toughest prison in Bolivia. It is 4,500 meters above sea level and at night the temperature drops to 5 or 6 degrees below zero. Obviously there is no heating, and if a relative doesn’t bring you food, they only give you food once a day. Imagine that situation when you are sick, with high blood pressure and pulmonary edema, like my son is,” Hugo said desperately. “We want and need him to come home.”