Thousands of people formed a human chain around the UK Parliament on October 8 to demand freedom for WikiLeaks founder Julian Assange. Actions in solidarity with the imprisoned journalist were held across the world, including in Morocco, Brazil, Australia, and the US

On Saturday, October 8, thousands of people in the UK gathered for a massive act of solidarity with political prisoner and WikiLeaks founder Julian Assange. Protestors formed a human chain around the Parliament in London to demand that the government cancel Assange’s looming extradition to the US, and for him to finally be freed.

Supporters in London gather around the Houses of Parliament to call for release of Julian Assange | via @DiEM_25 #SurroundParliament #FreeAssangeNOW pic.twitter.com/x4JWybwOvD

Stella Morris, Assange’s partner, told The Independent that the action had been organized because Parliament was the “seat of democracy” and that Assange represented “democracy at its strongest— government accountability and democratic movement…It is to remind people that this is a political case, and his imprisonment is politically motivated.”

Morris added that it had been “energizing” for Assange to know that he had support. “It gives him huge moral support to know that people haven’t forgotten him, rather that they are waking up to the enormous injustice this is,” she said.

Labour Party MP Jeremy Corbyn, who was a part of the human chain, stated that in making exposing the truth – his “life’s work” – Assange had taken “enormous risks and made enormous sacrifices” and faced “horrible personal abuse and attacks”, “but there are millions of people all over the world who support you, and today we are just some of those.”

Assange has been imprisoned at the high security Belmarsh prison for over three years, amid rising concerns regarding his physical and mental health. Following a protracted legal battle marred by revelations of severe procedural violations, his extradition to the US was approved by former Home Secretary Priti Patel in June.

The US has imposed 18 charges against Assange, including 17 counts under the Espionage Act, in relation to confidential documents published by WikiLeaks which exposed the war crimes and other atrocities committed by the US and its allies during the invasions of Afghanistan and Iraq. If convicted, he could face up to 175 years in prison.

As Assange’s legal team is in the process of appealing the Home Secretary’s decision, the fight for his release has been upheld by steadfast solidarity from across the world.

“We are alert and in struggle for the freedom of Julian Assange, in defense of the truth, and against imperialism!” declared the International Peoples’ Assembly, a collective of over 200 progressive organizations, movements, and parties. The IPA organized a day of international mobilizations on October 7 and an online campaign on October 8 to demand Assange’s release.

“We are together with his [Assange’s] cause, and we will continue to fight until he is free.”

The work of @wikileaks defends people's sovereignty in exposing the violence of imperialism. Carlos Ron of the @ISB_VE talks about the case of Venezuela and how Julian Assange's work helped to uncover the truth. #FreeAssangeNOW #FreeAllPoliticalPrisoners 📢✊ pic.twitter.com/C3fdbpHEhD

Our movements are growing and solidarity is building! Gertrudis Simón Pineda from @CubaCentral speaks about the international solidarity in the campaign to free #JulianAssange.

📢All across the world as people's movements say NO to U.S. Imperialism and demand to #FreeAssangeNOW! pic.twitter.com/lssie1IDLi

Brazil
On October 7, popular movements held a protest outside the UK consulate in Rio De Janeiro demanding Assange’s release. Activists bore pamphlets, flags, and yellow ribbons and carried a petition with over 70 signatures from other supporters from Brazil. However, they were barred from delivering the document. 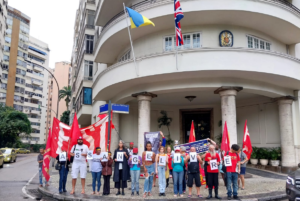 Actions were also held outside the consulates in the Pinheiros region of São Paulo and in Belo Horizonte in the state of Minas Gerais. They were supported by organizations, including the National Federation of Journalists (FENAJ), the Popular Brazil Movement, and Professional Journalists Association.

“The alleged crime committed by Assange is that of being a good investigative journalist who revealed the truth about the imperialist government and the US war machine,” said IPA member Giovani del Prete.

Morocco
Activists raised slogans in solidarity with Assange outside the UK embassy in Rabat, Morocco, and handed over a letter in protest of his extradition.

“We demand that Julian Assange not be handed over to US imperialism and we stand together for his release,” stated Abdallah Elharif of the progressive Workers’ Democratic Way Party in Morocco and a member of the IPA.

“We call on all anti-imperialist forces, the peoples’ media, all living consciences, and all the free men and women of the world to engage in the movement against this operation. In order to achieve that, we demand [people] to take all possible struggle steps,” he added.

United States of America
“The imprisonment and attacks against Julian Assange are attacks on the right to free speech,” stated US-based activist Claudia de La Cruz. “Julian Assange revealed the way in which the CIA and the instruments of imperialism function to intervene politically… to achieve domination, to be able to extract, to be able to oppress and exploit not only outside the US but also inside.”

“So [in] defending Julian Assange’s right to be free, we defend our right for freedom.”

From the US, Claudia de la Cruz says "In our region, we understand that Assange revealed the way in which the CIA and the instruments of imperialism funcion to intervene politically." That's why we all say #FreeAssangeNOW and #FreeAllPoliticalPrisoners 📢✊ pic.twitter.com/KVXxNcIoFs

Coinciding with the action held in London, activists held a rally outside the Department of Justice in the US capital of Washington DC on October 8.

Actions have reportedly also been planned in other areas including Denver, Minneapolis, San Francisco, and Seattle.

Croatia
The Union of Croatian Journalists (SNH) organized an action to demand freedom for Assange in Zagreb on October 7.

Slovakia
Dozens of activists also held a protest outside the UK embassy in Bratislava, Slovakia on October 7 to demand that Assange be released.

“Julian Assange is a publisher, a political prisoner, and a prisoner of conscience. His only crime is publishing evidence of war crimes and human rights violations by the US military… and the corruption of the powerful,” stated the Institute of  Human Rights (IL’P), an organization which has long called for Assange’s freedom, and which organized the protest.

More than 16,000 people in Slovakia have signed a petition by the IL’P calling for his release.

John Shipton: Mexico’s Support for Assange Will Resonate Throughout the World

Australia
Thousands of people held a march in the city of Melbourne on October 8, and formed a human chain across the Southbank bridge. Protesters called on the Australian government to take action.

Huge turnout in Melbourne Australia to kick off the world wide Human Chain events for #JulianAssange. The crowd chants:
"JULIAN HAS TOLD THE TRUTH.@wikileaks HAS GOT THE PROOF"https://t.co/w9oWWIygmi pic.twitter.com/GkSgAcyr5f

Assange’s brother, Gabriel Shipton, told the AFP news agency that, “The Prime Minister’s [Anthony Albanese] statements before the election– enough is enough, he doesn’t see what purpose is served by Julian being kept in prison– those were seen as a commitment.”

However, “It has been so many days of this government and Julian is still rotting in prison.” Shipton urged the Prime Minister to reach out to US President Joe Biden directly.

A protest was also held outside the British High Commission in Canberra.

Several additional rallies and events were scheduled across the world on October 8 as part of a day of action in solidarity with Julian Assange, including gatherings by the Assange Support Committee in France and by activists in Wellington, New Zealand. Actions were also organized in Johannesburg, South Africa and in Accra in Ghana.

In a letter addressed to the US government, the National Syndicate of Tunisian Journalists (SNJT) called for Assange’s release, stating that he had been “singled out by the US in what looks like persecution.”

“The extradition of Mr. Assange would create a grave threat to press freedom in the US and around the world… The scope and reach of the US Department of Justice charges mean that every journalist, everywhere, is vulnerable to extradition to the US for reporting the truth,” the letter said.

“Enough is enough. It is time for this assault on press freedom to end. The prosecution of this individual criminalizes and chills public interest journalism.”