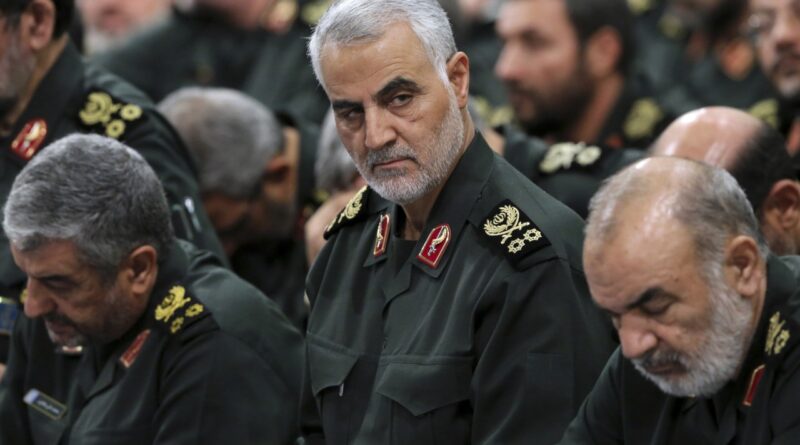 January 3rd 2021 marks the first anniversary of the martyrdom of one of Iran’s foremost Generals, military leaders and regional strategists. He was murdered in Bagdad the capital of Iraq, alongside Abu Mahdi al-Muhandis, Deputy Commander of the Hashd al-Shaabi known locally as the PMU, Popular Mobilisation Units, a part of the Iraqi armed forces.

These illegal murders, which constitute a war crime should see Mr Trump brought before the International Criminal Court at the Hague.

America under Trump no longer recognises the legitimacy of the International Court. In fear of war crimes prosecutions against American forces who committed heinous atrocities in Afghanistan, America left the ICC in April 2019.

This immoral, cowardly, drone execution was also a direct declaration of war on both Iran and Iraq.

By killing two prominent members of the Iranian and Iraqi armed forces, who were also representing their respective governments, America has shown yet again it is the world leader in international terrorist attacks.

This is yet another example of how American hegemony, the right of America to carry out any actions it sees fit, in any country of the world, contrary to international law, shows the scant regard America, it’s President and its established military-industrial complex has for democracy, human rights or international borders?

General Soleimani and Deputy Commander Abu Mahdi al-Shaabi died at the hands of cowards. Their memories and deeds will live long after the failed policies of American imperialism in the region of West Asia and the Middle East. Trump has planted a seed which once germinated will see the end of American hegemony in the region and perhaps the world.

General Soleimani was the leader of the Al Quds section of the  Iranian Revolutionary Guards.

He fought to win Iran its freedom from the CIA military coup of 1953 when they deposed the democratically elected leader Mohammad Mosadegh and installed the Shah eventually leading to the  Iranian Revolution in 1979.

He rose through the military ranks during the war with Iraq. A war driven by the west using Saddam Hussein in its counter-revolution against the Iranian people.

He not only led those forces in battle but he was also the glue that solidified the resistance axis, that runs between Iran, Syria, Lebanon, Yemen, Iraq, and Palestine.

This was no desk-bound toy soldier.

This was a leader of men from the southern fields of Lebanon that forced an Israeli withdrawal, to the suburbs of Damascus where he fought Takfiri mercenaries sent to destroy Syria on behalf of the west, Israel, Nato and the dictatorships of the gulf.

He fought ISIS/Daesh in Syria and ISIL/Daesh in Iraq

He stood side by side with the Palestinian resistance in Gaza and the Houthi revolutionaries in Yemen.

This man was the architect of many victories for the peoples of the region against American imperialist aggression and military misadventures.

He was murdered by Donald Trump, the Whitehouse, the Pentagon, Tel Aviv, London and Riyadh because he was a threat to their machinations and designs for West Asia.

He was a one-man army whose legendary exploits and tails of bravery and daring-do have ignited the torch of freedom and resistance across the region.

They may have killed the revolutionary but they have not killed his singular vision, his inspirational leadership, nor his followers who may yet make that vision a reality.

That vision was and is to witness the complete withdrawal of American forces from the region, and the establishment of a free unoccupied Palestine, from the river to the sea,

America may have killed one man but in his place, many thousands now stand.

A hero of the Republic of Iran, an icon of the resistance, he may like Guevara and Castro, Chavez and Allende become a beacon for all anti-imperialists who seek to end imperialist aggression and wars.

To create a world of equals where cooperation replaces subjugation and mutual trust, respect and dignity breed peace from war and love from hate.

He may be dead but his legacy for freedom for the region will continue.

As the resistance from Baghdad to Beirut, from Damascus to Sana and everywhere in-between grows stronger and more confident every day, only the continued military occupation by America can stem the tide of anti-American, anti-imperialist nationalism that is sweeping West Asia.

A new Arab Spring is beginning. Raised in Persia, it will liberate all the people.

In their deaths, a new hope is born.