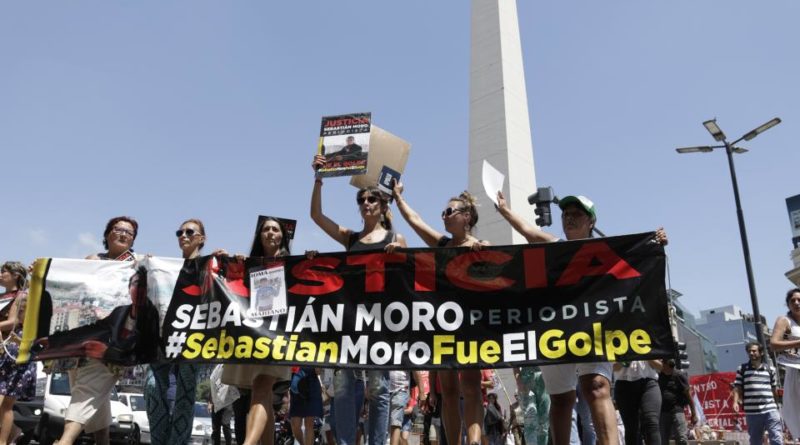 “My son denounced the coup in Bolivia and died a few days later in a very suspicious way,” repeated Raquel Rocchietti, the mother of the journalist Sebastián Moro, a contributor to Página/12 who died on November 16, six days after the taking of the Palacio Quemado. By various indications, his relatives suspect that he was beaten and tortured in the days prior to suffering the stroke that caused his death, and [they] marched this Friday to the Argentinian Foreign Ministry from the Obelisk, to demand justice for Sebastian. To the protest a demand was added for the freedom of Facundo Molares, the Argentinian photographer who was arrested by the de facto government of Janine Áñez while he was hospitalized.

The mobilization began at noon and traveled from Ave. Carlos Pellegrini to Santa Fe Avenue, then continued to the San Martín Palace. Throughout the march, relatives and friends of Moro raised posters with the face of the Mendozan journalist and a very clear slogan: “#SesbastiaMoroFueElGolpe”. “It is very rare to be on this side, I tend to be outside, covering the marches,” Penelope Moro, Sebastian’s sister, told this newspaper. “I am very grateful for the support, hopefully justice will be done.”

While the government officials of Mauricio Macri – who was in office when Sebastian Moro died – did not contact those close to the victim, the family members said they had been received by the new Secretary of Human Rights, Horacio Pietragalla. “The official promised to work to clarify the case, hopefully they can move forward so that what happened can be known,” they said.

In 2018, Moro moved to Bolivia and began covering the main issues of human rights and rural activity in the plurinational country. As of the Bolivian elections of October 20, he began collaborating with Página/12 . On November 10 he published his last report entitled “A coup d’etat underway in Bolivia”, when many journalists dodged the definition of what was happening. His relatives highlight his strong commitment to human rights and social causes. “He is a people’s journalist. We have to remember and honor his legacy, because his work is infinite,” Rocchietti recalled.

His mother defines him as “a walker”; his sister points out that “he read and wrote all the time”. “He liked to read Rodolfo Walsh, Paco Urondo, Juan Gelman. It’s funny, isn’t it? He read authors who were victims of military dictatorships, and he ended up with the same fate,” Rocchietti reflected in dialogue with this newspaper. “In these months I was reading many of his books to try to understand a little more how he saw the world,” she said.

“We demand a verdict and the collaboration of the Government so that justice is done,” said Sebastian’s mother. Without the rule of law in Bolivia, Moro’s relatives were only able to file a complaint in Argentina, before the Inter-American Commission on Human Rights (IACHR). They also highlight the severe mistreatment they suffered from the authorities of the neighboring country, such as not being able to bring the body back to mourn the death.

Forensic experts who work with family members argue that the marks and injuries that were on Sebastian’s body are characteristic of those who suffered a beating or torture. Of note, he could not finish his work day on Friday, November 8 in the Prensa Rural newspaper, since the media headquarters had been attacked by violent groups, like so many other Bolivian media. “From there they start working from the underground.”

“On Sunday 10 we asked a friend to help by going into his house, and he found him semi-unconscious and beaten. At that time, he was hospitalized in an emergency clinic in La Paz,” Penelope said. Within a few hours, Evo Morales submitted his resignation, forced by the opposition and the military. After being in a coma for several days, Moro died.

“His body had multiple traumas,” Rocchietti said. “We will press the complaint and actively, until the most compelling evidence is found,” she said. “My son is a victim of the coup in Bolivia.”