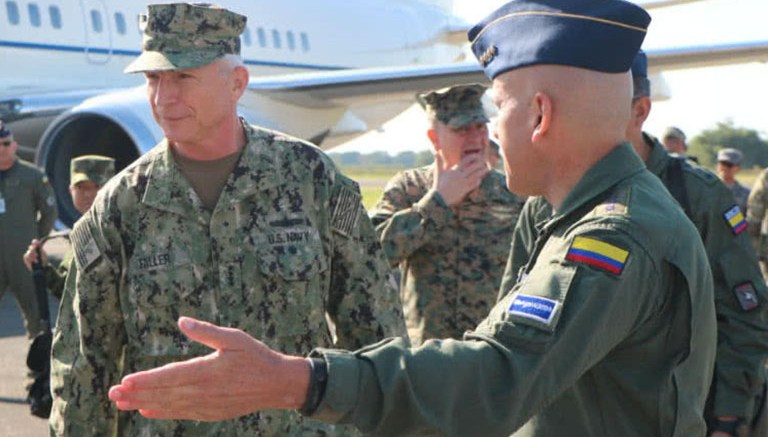 The actions perpetrated since March 21 of this year by criminal groups coming from Colombia into La Victoria in the Venezuelan territory bordering our sister country, were not improvised. They are part of Plan B of the Southern Command to destabilize our nation and overthrow the Bolivarian Revolution.

In February 2016, the then Chief of the Southern Command, Kurt Tidd, wrote in a document titled Operation Venezuela Freedom-2: “It is indispensable to emphasize that the responsibility for the elaboration, planning and partial execution of Operation Venezuela Freedom-2 at the present time rests with our Command… Under a ‘siege and suffocation’ approach we have agreed with the closest partners of the MUD (opposition political party) to use the National Assembly as a pincer to obstruct governance: convene events and mobilizations, interpelate the rulers, deny credits, repeal laws.”

By that time, 2016, Plan A would be executed by the MUD deputies from the National Assembly. However, they also had a Plan B. As Donald Trump said, “All options are on the table.” The same document reads: “Although we cannot act openly now in this military situation, with the special forces it is necessary to concretize what was previously planned for phase 2 (pincer) of the Operation. The training and operational preparations of the last months with the Joint Task Force-Bravo at the Palmerola base, Honduras, and the Joint Interagency Task Force South (JIATFS) allow to place such components in conditions to act quickly in a geo-strategic arc supported by the military bases of ‘control and monitoring’ in Arauca, Larandia, Tres Esquinas, Puerto Leguizamo, Florencia and Leticia in Colombia; all this as a place of Forward Operations with projections over the central region of Venezuela where the political-military power is concentrated.”

RELATED CONTENT Armies of Neighboring Countries are Not our Military Objectives: FARC-EP Clarifies Position on Apure

Two years later, in February 2018, the Southern Command published another document, Master Strike to overthrow the ‘dictatorship’ in Venezuela. Among the plans were: “to continue the continuous fire on the border with Colombia, multiply the trafficking of fuel and other goods, the movement of paramilitaries, armed incursions and drug trafficking, provoking armed incidents with the security forces of the Venezuelan border and also recruit paramilitaries mostly from the refugee camps in Cucuta, La Guajira and from Norte de Santander.”

In addition to these plans, there are plans to position the discourse around the alleged drug trafficking and terrorist nature of the Venezuelan government. The Southern Command documents state: “We cannot leave aside the effort we have been making to link Maduro’s government to corruption and money laundering in order to discredit his image before the world and his domestic followers.”

After 5 years, despite the fact that the deputies of the MUD, from the National Assembly (2015-2020) shamefully followed one by one and to the letter the actions of the Southern Command, they could not achieve their goals of overthrowing the Bolivarian Revolution. In March of this year, the current head of that Command, Craig Faller, in his appearance before the US Senate, acknowledged the failure of its policy against Venezuela. He said: “The Venezuelan president, Nicolás Maduro, continues in power with the support of Cuba, Russia, Iran and China despite the strong sanctions against the Bolivarian country in pursuit of the destruction of the Venezuelan economy. Appropriate diplomatic and economic pressure has been applied; it has not yielded the desired result.”

It is no coincidence that while the actions on the border were being perpetrated, Faller told the US senators: “the government of Nicolás Maduro is involved in narcotics trafficking, openly supporting narcoterrorism by collaborating with the National Liberation Army (ELN) and the Revolutionary Armed Forces of Colombia Dissidents (FARC-D) to move hundreds of metric tons of cocaine from Colombia through Venezuela.”

The Admiral stated in his appearance that between 2015 and 2019 the flow of drugs from Venezuela increased 145%, a figure that in no way corresponds with those of the recent June 2020 report published by the UN Office on Drugs and Crime. On the contrary, Venezuela, unlike Colombia, does not even appear among the drug producing, consuming and trafficking countries. When it is mentioned, it is in the list of countries that have dismantled laboratories where cocaine produced in Colombia is processed. In addition, the report states that in recent times, drug trafficking in Venezuela has decreased considerably, which was already very low. What Faller told the Senators is not true, or in any case, he was misinformed.

As time goes by, the desperation of the Southern Command and its imperialist overlord becomes greater and more evident, particularly because of failure after failure, its main enemies are advancing rapidly in the region, putting the Monroe Doctrine in check.

Craig Faller told the Senators that “China, with the insidious, corrosive and corrupt influences of the Chinese Communist Party, is one of the two greatest long-term strategic threats to America’s security in the 21st century,” and linked the Asian country to the second threat—the transnational criminal organizations responsible for trafficking in arms, people and drugs. He stated, “I would like to point out that the DEA has cited Chinese money laundering as the number one financier of transnational criminal organizations.”

The armed wing of imperialism is so fearful of losing “its” space in Latin America and the Caribbean that it whimpered before the Senate when it reported that “China is moving rapidly toward its goal of economic dominance of the region for the next ten years. In 2019, China surpassed the US as the leading trading partner of Brazil, Chile, Peru and Uruguay, and is now the region’s second largest trading partner. From 2002 to 2019, China’s trade with Latin America soared from $17 billion USD to more than $315 billion USD, with plans to reach $500 billion USD by 2025.”

Faller also confessed his fears regarding Russia because of “Russia’s agreements with Venezuela and Nicaragua to expand air and maritime access with the aim of projecting military power in the region.” He also expressed his fear for “Iran’s presence in the Americas through economic and security cooperations.” He even said that “he is concerned that Tehran maintains a television channel in Spanish [HispanTV] that reaches 17 countries in the region.”

We are witnessing the decadence of the most genocidal empire in history which, like a wounded, fearful and desperate beast, also becomes more dangerous and clumsy when it wants to mark, with hoaxes and threats, what it considers “its” territory since the Monroe era. Under the mantle of the Bolivarian Doctrine, the response of our glorious Armed Force has been forceful and clear: “If you want, so do we, and we are determined to do anything, for us the Homeland is everything.”