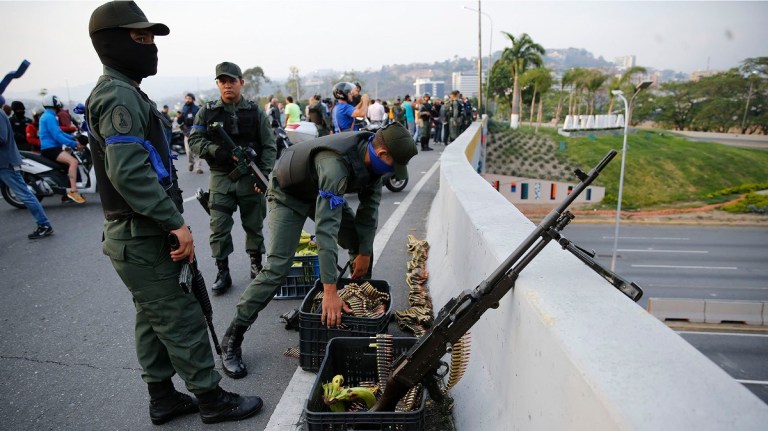 International Opinion
May 2, 2019 orinocotribune coup d’etat, failing coup, Guaido, Leopoldo Lopez, Trump not knowing what to do, US Imperialism, US puppets

What a pathetic, sad bluff/costume party Trump admin poured its hopes and tweets into.

President Trump on Tuesday accused Cuba of aiding the government of President Nicolás Maduro of Venezuela, who the administration evidently hoped would be ousted by day’s end, warning that the United States would impose an embargo and additional sanctions on the country if Cuba did not end its support.

And what exactly was the Trump administration placing such hopes in? Moon of Alabama:

There are no reliable reports that any additional military besides the 30 or so men on the bridge have switched to Guaidó.

Someone points out that the soldiers supporting Guaidó carry M4 Colt assault rifles. The official assault rifle of the Venezuelan military is the Kalashnikov AK-103. Back in February there were a number of flights from Florida to Venezuela which delivered weapons to the opposition.

It is becoming clear that this coup attempt is no more than a stupid PR campaign. Here is a map of the whole ‘coup’ scene which plays in a small area of the wealthy Altamira district of Caracas.

At the bottom of the map is the La Calota air base, also known as Generalissimo Francisco de Miranda Base, which Guaido supporters tried to enter. They threw rocks against the guards until tear gas drove them away. Directly north of it runs a highway east to west. The two highway bridges on which Guaidó’s soldiers stand are crossing the highway right next to the base. Some 500 meters north of the highway bridges is Plaza Altamira (the upper blue point) where Guaidó spoke to some supporters.

The highway bridges can be seen in this video taken from north of the highway looking south across the bridges towards the airport. In the video some fireworks go off to which nervous Guaidó supporting soldiers on a bridge respond (1 2 vid) by firing a few shots into the air.

The whole coup attempt was run within a 500 x 200 meter corridor with nothing of significance happening outside of it. A dangerous propaganda stunt but so far nothing more than that.

Far from a “military uprising” this was a fake-it-til-you-make-it theatre with Guaido trying to create the appearance of one. Trump, Pence, Pompeo, Bolton and Abrams didn’t just root for the “coup attempt” but actively took part calling on Venezuelans to fall behind Guaido. The silly bluff/costume party did not work, the Venezuelan troops stayed at their posts so now of course the Russians, the Cubans, and the Martians probably are to blame because how else to account for the failure of such a foolproof plan Trump admin poured its hopes and efforts into??

If Cuban Troops and Militia do not immediately CEASE military and other operations for the purpose of causing death and destruction to the Constitution of Venezuela, a full and complete….

’Maduro had a plane on the tarmac and was ready to leave this morning’, claims @SecPompeo without offering evidencehttps://t.co/wCukekMyte
But as Pompeo admitted just last week, telling lies was (and some may say still is) one of his key job requirementshttps://t.co/iOnSVpke2N

Bolton out here naming names, pointing to Maduro officials who were supposed to support the insurrection but didn’t…. at least today. Seems a bit desperate. https://t.co/vbz1V8jjwR

To @jguaido, the National Assembly and all the freedom-loving people of Venezuela who are taking to the streets today in #operacionlibertad—Estamos con ustedes! We are with you! America will stand with you until freedom & democracy are restored. Vayan con dios! #FreeVenezuela

Gotta love the Pompeo/Bolton amateur-hour attempt at psy ops. Bolton trying to make Maduro suspect men closest to him are talking to Americans, and Pompeo trying to spread rumors Maduro is soft and a quitter.

Sorry guys but creating the appearance of a “military uprising/coup” on Twitter and pulling one off in the real world are two different things.